You’re leaving us alone, aren’t you? Alone to face the lava and acid rain…

That’s what my dogs’ faces said to me this morning as I closed windows.

Let me be clear. We do live in lower Puna, but approximately eight miles from Leilani Estates. We are in no danger of being engulfed by lava. And I’m pretty sure the dumping rain outside was not acidic, or at least not of the Raiders of the Lost Ark, face-melting variety. But those were my dogs’ words (and not me projecting, I swear). 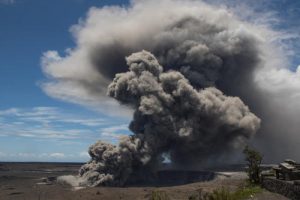 Kilauea 2018 (I know, lousy T-shirt) continues here on Hawaii Island, with things ratcheting up a little last Friday around 5 pm when Civil Defense issued their first explosive eruption/ash plume alert. There had been talk of The Big One, a steam-triggered explosion at Halema‘um‘u, for a while (lava days are like dog years, so my sense of time is pretty warped), but this was the first mention in a civil defense alert. I was home alone at the time, my do-gooder husband off at meetings until late that night. Our house, like many Hawaii residences, won’t exactly shut up tight. Basically the big triangles under the peak of the roof on both ends are only framed and screened to allow air flow. Ash plume, huh?

I wandered around our tiny shed and carport, messing up Paul’s stuff, until I found heavy duty garbage bags and duct tape. (The wily staple gun was elusive.) Then I wandered around even longer trying to find our ladder. Here’s a self-care tip: you might be a little sleep-deprived when it takes you ten minutes to find a twelve-foot ladder. After nearly plunging it through the back screen door, I settled for leaning it against the house by the front door and hoped the dogs didn’t pee on it.

Fortunately, there was no explosion that night, and the next day Paul hit Home Depot. We now have plastic sheeting, stapled at the top and rolled, with a long knotted string hanging down to release it. Does it work? Well, we’ll get to that.

We did a little more prep Saturday, and that night I was finally drifting off when a boom woke me. I rolled over, gently semi-woke my husband, and told him what I’d heard and to be ready, in case that was The Big One. (Anyone else think of Sanford and Son?) Of course, he went right back to sleep, assuming he was ever awake. 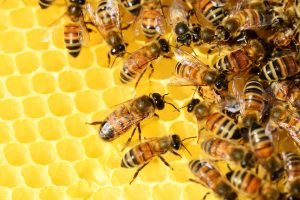 I’d forgotten the loud noise by Sunday afternoon, when the Next Horseman arrived. I always leave the front door open for Mr. Dribbles (aka Travis the dog), and at some point I noticed half a dozen or so bees in the entryway. Closing the door, I began catching the intruders in a yogurt cup. I’m mildly allergic (Benadryl and ice packs, not trips to the ER), but they were pretty docile and there weren’t that many. So I thought.

Around the tenth bee I lost my bee-catching mojo and left the last couple to wrangle later. I returned to my desk, worked for maybe twenty minutes, headed to the kitchen for a drink… and found another dozen bees there. No wait, a couple dozen, and from the back lanai, I could see a couple hundred bees swarming around that end of the house.

Maybe they’d been displaced by all the lava crazy and were looking for a new home. They were still docile and seemed content to stay in the kitchen, so I went back to work and tried not to be paranoid about buzzing noises instead of trying not to paranoid about earthquakes and lava. (I also kicked the bee-chasing cat out of the house.) When my non-allergic husband got home, he fashioned a makeshift smoker from a planter and we spent the rest of the daylight hours escorting bees from the house. He also patched a hole in the screen, but we continued to find dead bees from that first wave for days. (To Have and Have Not, anyone?) 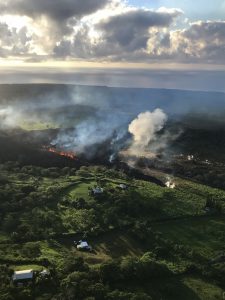 Needless to say, we were ready for sleep when Sunday night rolled around. Except that’s when it suddenly became clear what had woken me Saturday night—not the caldera, but lava bombs at the new fissures. EIGHT MILES AWAY. It was a long night, with almost continuous explosions. We later learned we were hearing the birth of what has been the most active fissure so far, but at the time we had no idea what was happening. I can’t imagine what it was like for people in Pahoa or Nanawale, closer to the action, but I’ll guarantee there were thousands of people sleepwalking through their Monday. 😴

The rumbling and booming has continued all week, with nearly two dozen fissures so far. It feels as though the ground is constantly moving, and the noise is surreal, similar to thunder, but coming from the ground instead of the sky. Your brain notices that difference and snags on it, not quite sure how to classify what it’s hearing. I consider myself very fortunate to never have lived in a war zone, but that’s how many of the people closer to the eruptions describe it.

Of course, eventually you adjust to your new normal… sort of. It’s probably not a coincidence that I managed to lock myself out of my website this week. (I couldn’t even see it in my browser until my host intervened; security apparently decided I was the worst hacker ever!) I keep a To Do List within easy sight so I can remind myself what I’m in the middle of any time I pause for more than a few seconds. (And no, it doesn’t work.) But to paraphrase one of my Dead Hollow characters, the world doesn’t stop spinning because a volcano is erupting in one corner of a big island.

Case in point, my <ahem> expired car inspection. Somehow I forgot to get my car inspected last year and only noticed it when my car registration deadline loomed.

Side note: If I never win anything else, it’s because all of my luck goes to dodging non-moving violations. (Actually, I’ve never had a speeding ticket, either.) I went for three years on an expired inspection while living in New Orleans, occasionally dodging checkpoints. See, I thought it was good for two years, but when I realized it wasn’t…

Anyway, back to the rude world still turning… I had an appointment for a safety check early Thursday. So what’s the first thing I see on my phone Thursday morning? A couple of alerts saying, There’s been an explosive eruption, shelter in place if you’re in the path of the ash plume. That was pretty much it. (I am skipping my Civil Defense rant.) 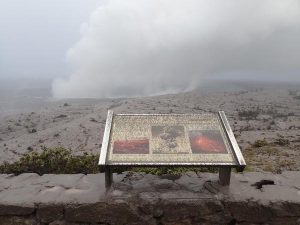 Ash-covered sign at Jaggar Museum viewing area on May 17, 2018, by USGS

I herded the dogs outside to pee, right before a dumping rain hit. Then I closed windows and tugged the ties on our plastic (it sort of worked with a little help from our broom) while Paul removed the end cap from our catchment to keep the ash out of our water. Poor thing! Considering his drenched state afterwards, I wish I had seen it, or better yet had video footage to share with you. 😉 Since it was dumping, the water in the pipe was under pressure, and it sprayed his face constantly while he battled to get the tight, threaded cap free.

Once he got cleaned up, Paul was off to meetings about—you guessed it—helping people affected by the eruptions. Unsure of the ash situation, I crated Fritz and Travis in the house and took Fred (who might have freaked and broken out his few remaining teeth) with me to Hilo for the safety check. To Honda’s—and Fred’s—credit, they didn’t bat an eye. While we waited outside, I struck up a conversation with an animal-loving, elderly Hilo resident. He had no clue there’d been a Halema‘um‘u eruption. I’m not sure the service people did, either.

I was surprised by this, and yet not. We knew because we’d signed up for alerts (not a simple process), and we’d only found one of the local radio stations consistently reporting on it, with the DJ mostly saying he was sorry he didn’t know anything. Meanwhile, that same day, sulfur dioxide rose to dangerous levels in Pahoa (schools and some businesses, including the post office, were closed). It becomes difficult sometimes to keep straight which eruption is causing which impacts. When I first opened the front door Thursday, the air was definitely nastier than usual. Whether this was because of the Halema‘um‘u eruption or the closer ones, I don’t know. I thought I tasted a hint of ash on top of the usual bleck, but perhaps that was the power of suggestion.

And we were lucky this time. The ash plume that went 30,000 feet (more than 5 1/2 miles) into the air was a relatively brief burst, so there wasn’t nearly as much ash in it as there could have been. In fact, there was no layer of ash awaiting Fred and me at home, just indignant dogs wiggling in their crates. (I’m still glad we “unhooked” our catchment for the day.)

[Sigh] So it wasn’t The Big One, Elizabeth. Not yet.