We’re still here, and still breathing (sort of) in Lower Puna. I don’t want this to become the weekly lava bulletin, and I don’t want to get sucked down the rabbit hole, so I’ll keep my update relatively brief, with promises for a more in-depth post soon. (I’m also adding Lava blog post categories to the dropdown.)

The lava is still flowing, often much faster. It crossed another highway, buried two wells at Puna Geothermal Venture in lava, and is threatening other residential areas, triggering additional evacuations. Seeing a couple of the huge, 40+ passenger Super Stallion military choppers flying overhead this weekend, getting the lay of the land, was both creepy and reassuring. Everyone is on edge enough that I just got a notification that Civil Defense won’t be testing the sirens today. (The tsunami sirens blare the first of every month.)

Where we are (at least eight miles away), the fissures generally aren’t as loud as they were a week or so ago, but they resumed heavy rumbling through the air and through my feet while typing this sentence. (Seriously—kinda like putting laundry on the clothes line and summoning rain. Addendum: I wrote the bulk of this Thursday, and the motion woke me Thursday night.) 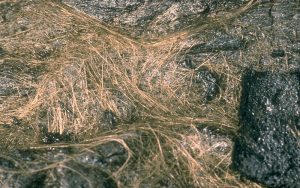 Earlier this week, Pelé’s hair was falling from the sky five miles away in Pahoa. If you’ve ever visited the Jaggar Museum and Overlook (now closed indefinitely), you probably remember the fibrous strands of volcanic glass. So I found myself squatting in nasty cane grass, fighting: the vegetation (briefly with a machete); drizzling rain; cramping ankles and thighs; and a tool I apparently did not know how to use, all in my efforts to remove the cap on our catchment tank overflow. (It took me days to figure out the irritated bump on my hand was an embedded sleeping grass thorn.) But I did not get sprayed in the face. 😎

Shifting winds made for a couple of days of closing windows against the smoky air. The skies often look downright apocalyptic, and the night scenes of lava could be mistaken for Mordor. In daylight hours, depending on the wind, we either see the smoke rising and the pyrocumulus clouds forming, or just a wall of phug. (Pyrocumulus is a real thing; phug is my own alliterative creation.) At night, we see the glow on the horizon.

I finally remembered to charge my camera battery and tried to get a few pictures. The moon was out, too, which I foolishly thought would make my task easier. The good news: I have a tripod, and—with my husband’s help—it did not take out my eye. The bad news: I don’t have a clue what I’m doing, especially in the dark. I must’ve burned through half the battery, trying to get my poor camera to focus on the dark sky, red sky, and bright moon all at once. The resulting pictures are pretty freaky. They were taken a few hours after sundown, not at dusk (you can see stars in the latter ones). They also haven’t been altered in any way (no filters), but neither do they exactly look like what my eye saw. I’m including a totally blah picture of the same approximate spot in overcast daylight (a wall of phug) for comparison. 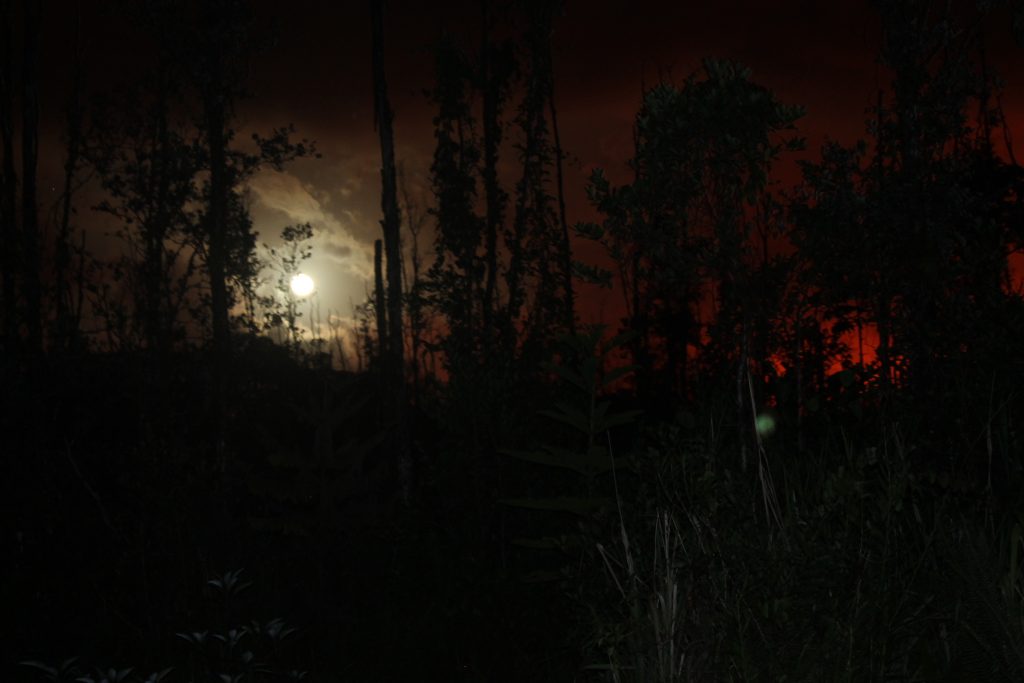 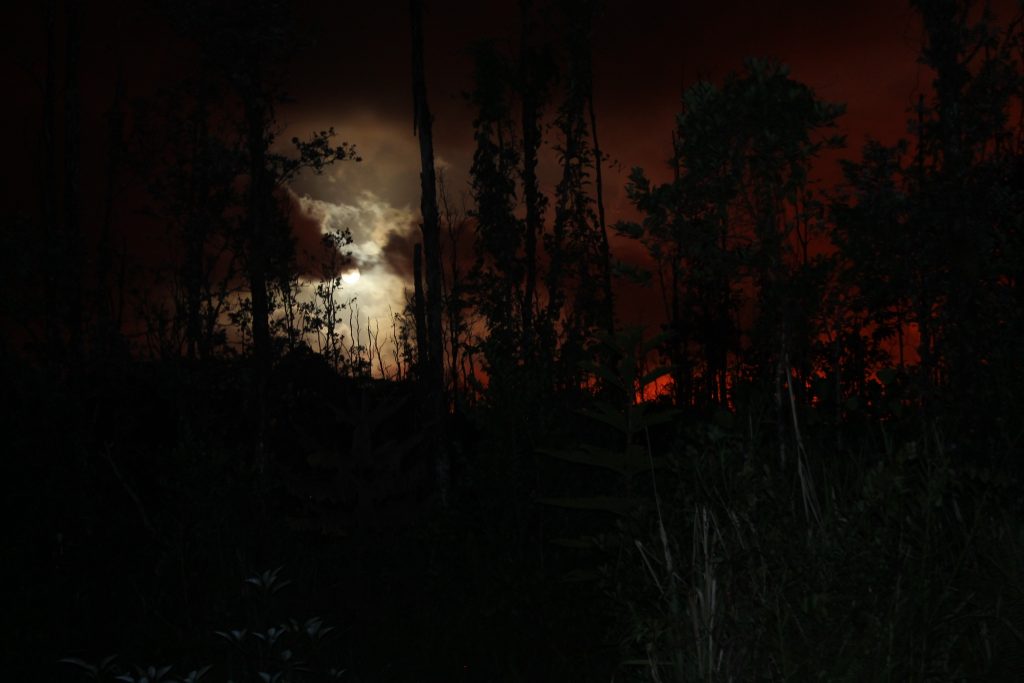 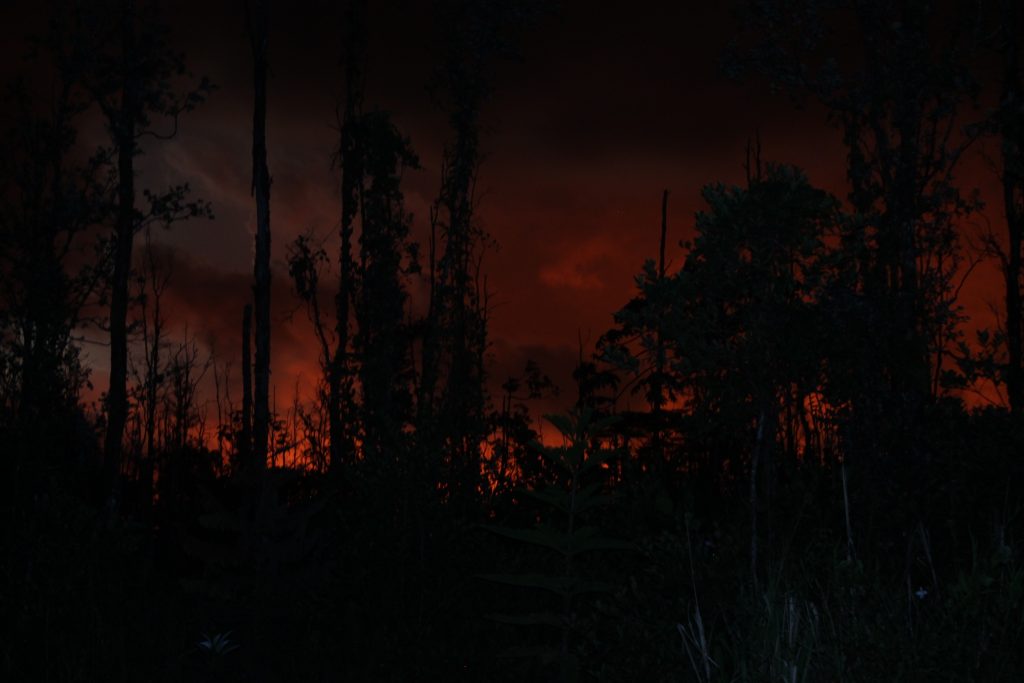 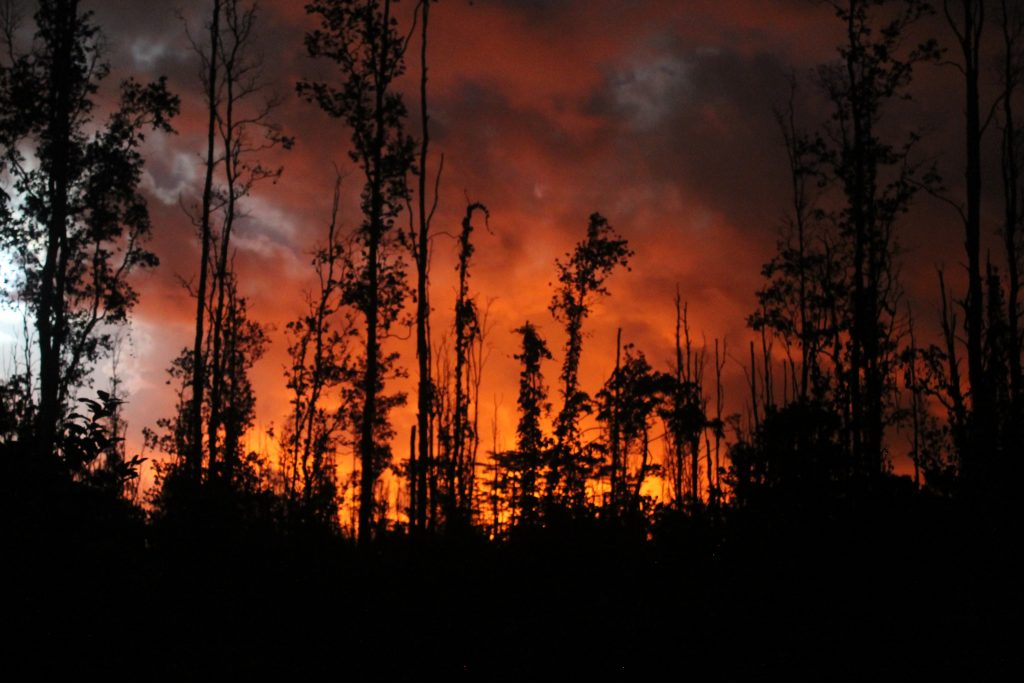 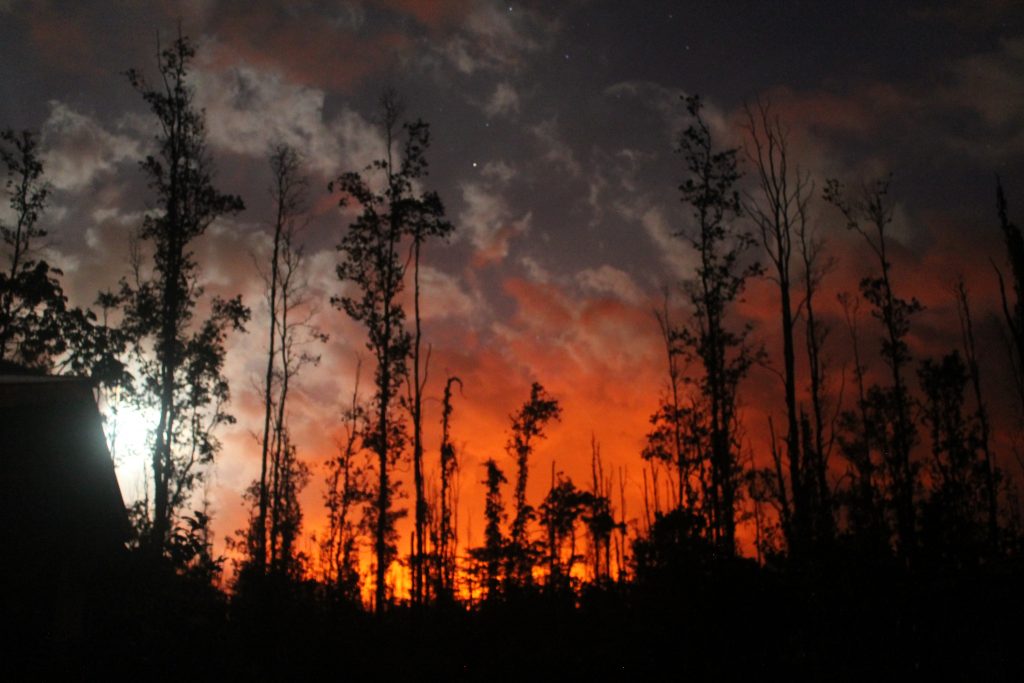 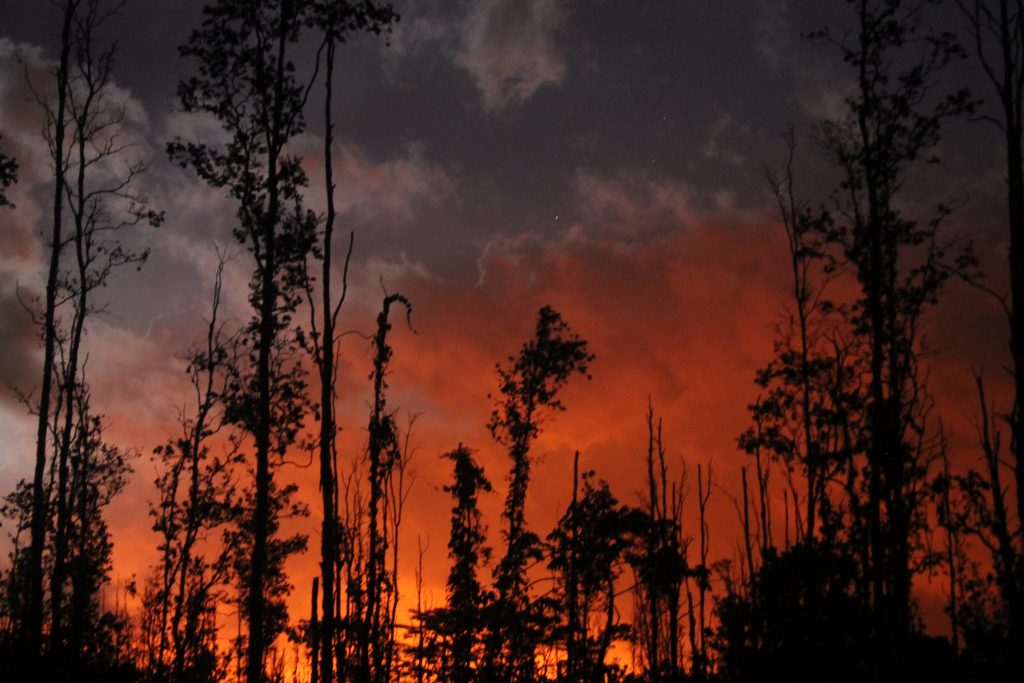 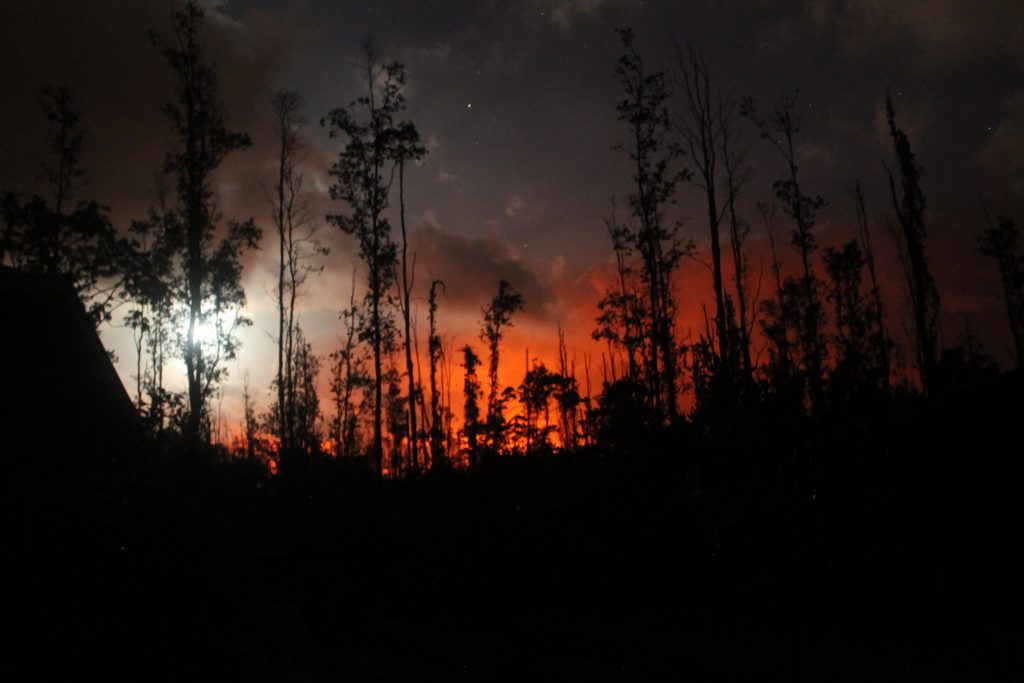 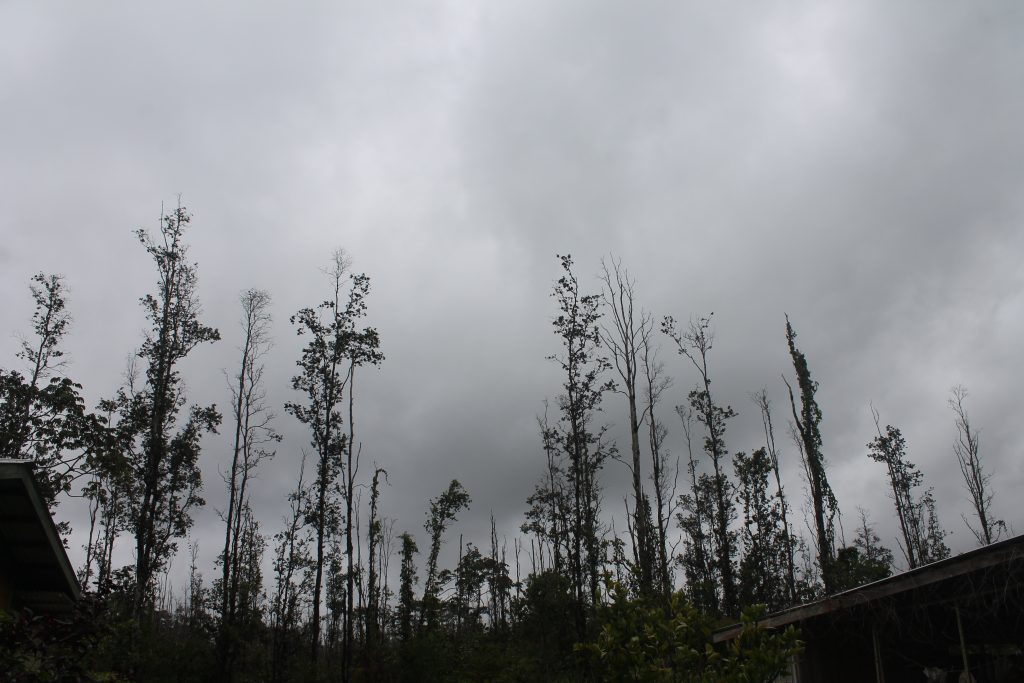 And yet, for most people fortunate enough to not be in the lava’s direct path or directly downwind of volcanic gases or ashfall plumes (the poor people of the Ka’u district are getting hammered), life goes on.

For my part, that means fighting Fred for leg space under my desk while working on edits for Dead Hollow Book Three, Heir. And I am so excited about it! I know, edits aren’t supposed to be exciting, but these are. The story was already solid, so my developmental editor was able to make suggestions like, Wouldn’t it be more compelling if you ended the chapter here? Isn’t Character X a better point-of-view choice for this scene than Character Y? And yes, the occasional, Hmm… is this consistent with [insert a big old pile of stuff that’s happened to this point]. They’re all tweaks to make a good story—I hope—a great story. 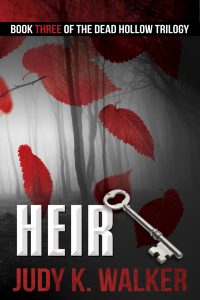 Good or great, I can promise it will not be a short story. Yep, I’m putting on my big girl pants so I can admit, this is the longest book I’ve ever written. I’m not sharing numbers now because I will cut while editing—I’ve cut 3K so far—and I don’t want to jinx my efforts. (I am a Little Stitious.) But I was relieved when my editor confirmed that it’s not bloated—there’s just a lot happening and that takes substantial ink. Or pixels, as the case may be.

Is it just me or would my spooky sky pictures fit with a more tropical version of Dead Hollow? What’s that, you say? You haven’t seen the cover of this stupendous, trilogy-wrapping-up book yet? (You would have if you were on my email list—hint, hint.) Well then, let me oblige. Coming to you for a sleepless night (or two) this summer—Heir!