You may remember, from when the lava stopped short of engulfing Pahoa or from the cover reveal for the previous book, that I’m not Super Stitious, but I am a Little Stitious. (I’m not a fan of The Office, but I still love that mug). Except I’m starting to think I’m more than a Little Stitious.

Writers have a reputation as a superstitious lot. Because I had nothing else to do (like write this blog post) I looked up this fun list of writer superstitions (along with a gif of the Michael Scott quote). Some of the rituals of yore—number of/lucky pencils, typing titles at the end, odd and even page numbers, etc.— aren’t applicable to many writers in this digital age. (Maybe a lucky power cord?) Others have the wow! factor, but don’t necessarily sound like a great idea for me personally. Call me crazy, but I’m betting John Cheever didn’t have three dogs and a cat and sit on a yoga ball when he wrote pantsless. Joaquin Miller would not have needed a rain-simulating sprinkler system if he lived in East Hawaii—the requisite sound on his roof would never be far away. And leaving rotten apples in a desk (for the scent, like Friedrich Schiller) is a pretty awful idea in our tropical climate. Not only would the palmetto bugs and various other insects carry me away, but apples—humble on the mainland U.S.—are like gold here (at least so far as price).

Another list derived from a poll of current writers included some rituals I’d like to adopt. Maybe I need a designated Rough Draft coffee mug that gets spiked during the first read-through. (Some misguided writers employ caffeine-rationing schemes—purely for luck rather than on strict medical advice, which is the only way I might forgo my morning coffee.) A couple of writers refused to eat sweets or only ate lemon drops while writing villain scenes, lest the sweetness corrupt the villainy. But I don’t eat anything at my desk anyway. (See above, voracious palmetto bugs and other insects.)

So what has happened to up my writer’s Stitious level lately? Last week, I wrote a Pack Update about our thankfully stabilizing dogs. The next day—you guess it—there was a fracas. A melee. A doggie ruckus, if you will. The dogs had just eaten their evening meal and Fred was being frisky, galumphing around outside with a rope in his mouth. To make a short story even shorter, Travis snuck away with the rope, got possessive, growled and snapped at Fred, and it was on. Of course the Dingbat Dog with a Death Wish would initiate a free-for-all. 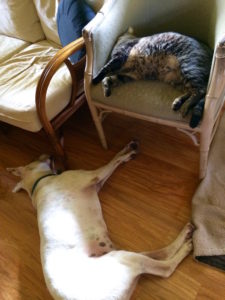 Fred and Ninja, apparently recovered from their Trauma

During the next several minutes of demonic snarling (and—not to left out—cat hissing), Travis was a wishbone between the two white dogs. Somehow my husband eventually detached Fritz from Travis’s leg (even though the dogs weren’t wearing their just-washed collars), but Fred and Travis had locked onto each other’s faces and wouldn’t let go. Pulling Fred by the scruff didn’t work, so eventually I just dragged him—and the attached Travis and my husband—across the yard by the back legs like a doggie wheelbarrow. The good news: despite all of our various yankings and poking and proddings, the dogs never growled or nipped at us. Although there was bloodshed, it did not rise to the level of bloodbath. And there was still enough light outside to do doggie first aid in the yard. Fritz emerged without a scratch (the pit bull’s not stupid), but Fred was dripping blood (his and Travis’s) from his mouth and Travis had a nasty tear on his ear. 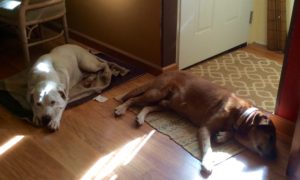 Physically, dogs heal crazy-fast. And although they showed a little wariness, a little insecurity around each other for a few days, it was very little. Fred tried to romp with the others the next day, and Fred and Fritz generally continue to be remarkably tolerant of the Dingbat, despite him regularly stepping on them and knocking into them in his flailing way. So it’s just a reminder that, like so much in life, maintaining the Pack is an ongoing process. And a reminder to put their collars back on. :p

On the non-jinx front, I said last week that the paperback for Braving the Boneyard should be available soon. As of yesterday, it is live on Amazon—booyah! Boneyard is also enrolled in Kindle Matchbook, so if you buy the paperback, you can get the Kindle version for free. (Sorry—that doesn’t apply to other ebook platforms.) You might want to buy it sooner rather than later, just in case this blog post prompts a Createspace meltdown. Yes, I am knocking on my non-rotten-apple-smelling desk. What do you think—Moderately Stitious?