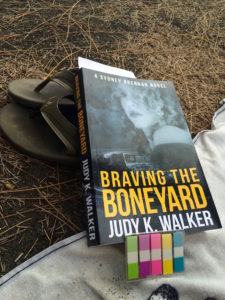 Check it out—me reviewing the Braving the Boneyard paperback proof at the beach recently. Yes, that is what passes for a beach in East Hawaii: a handful of black sand over hard lava rock, with a smattering of ironwood needles. (Which is why I didn’t stay there very long, lying on my thin pirate towel.)

That means, barring anything crazy, you should be able to purchase the paperback from Amazon sometime next week. In the meantime, you can get a better look at the full cover on my Boneyard Pinterest Board. Careful readers will notice that we (my cover designer and I) took some liberties, but we liked it that way.

I realize that, although getting Boneyard up and running has been a major focus for me over the past few months, for the rest of you (except the martyred husband) it represents a few (maybe several) hours of entertainment. In other words, you might be tired of me yammering on about it all the time.

So for this weeks’ blog post, I decided to share about something else that’s been a big focus for me over the past nine months. Don’t be alarmed, friends and family: the timeframe is a coincidence. I know we don’t see each other very often, but I have not been secretly gestating a little human. Instead, we’ve been slowly stabilizing a group of dogs so they don’t kill each other (or the cat) when we leave the room.

It’s time for a Pack Update.

Regular blog readers will know that my husband and I each have a big S tattooed on our forehead. That would be S for Sucker, or even SuperSucker, not SalsaLover or Sensei. Last year, we unexpectedly acquired two stray dogs in a twenty-four-hour period. They were both malnourished—Travis almost lethally so, with the added bonus of a tie-out cord having grown into his neck—and both were riddled with heartworms and other nasties. Less than a month after they joined us, a dog-walking melee with another pack ended in trips to the human emergency room and the emergency vet. This was followed by binge-watching The Dog Whisperer between bouts of sporadic dog- (and sometimes adjacent human) blooding while we endured six months of territoriality (my rug, my human) and shifting alliances that would put House of Cards to shame.

Among the highlights: Fred, our original dog, acting out like a petulant sibling (chewing dog beds, dog food containers, cat food containers, etc.); Travis trying to either get high or end it all with a cane toad in our yard; Ninja Kitty instigating several brawls, only to slip off to the kitchen and mewl demandingly for food while we cleaned up the bloody mess; and two-plus months of heartworm treatment (aka the era of Pill Pockets and Enforced Quiet Time), during which Fritz got crabby and decided he was the Travis Enforcer, which returned us to constant (though lower-intensity-level) monitoring. Fortunately, Fritz’s disposition improved as he felt better (the heartworm treatments hit him hard), and things improved even more last month when we were finally able to get Travis snipped.

So where are we now? Physically, all of the dogs seem pretty healthy.

Fritz keeps growing random lumps, but his chin acne (seriously—chin acne) has cleared up with some doggie Clearasil (not literally—apparently unlike humans dogs are capable of purchasing products without cute marketing names). Thanks to stinky fish oil, all of the dogs have healthier skin and coats and lovely morning breath. (Amazon loves us; we also have to get a wax made for Iditarod dogs to protect Fred’s sensitive paws from the hardships of Hawaii.)

Travis still dribbles inside (and I don’t mean with a basketball), but much less than he used to. And it’s been a couple of months since he last woke us in the middle of the night with a crate boo-boo. (He occasionally stands up with his paws caught in the spaces between the bars; Travis is our special dog.) My husband and I still have to search the yard with a flashlight every night and supervise his after-dark pee breaks, but that’s a small price to pay to avoid cane toad calamity. 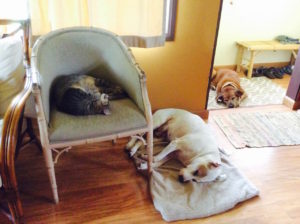 At this precise moment, it is dumping rain outside, and all of the dogs (and the cat) are scattered around me, napping contentedly. Is there anything more idyllic than sleeping (i.e., undemanding) pets?

(I should add the caveat that Fritz is not currently in one of his catastrophic snore phases, loud enough to catch the attention of the seismologists up the road at the Hawaiian Volcano Observatory.)

The dogs nap together a lot more now, and just generally seem more comfortable around each other. This week we’ve transitioned to leaving all three of them in the fenced yard together when we’re gone. So far no bloodshed, although someone did gnaw the top step one day. Still waiting for toothmark analysis, but the smart money is on Fred. That said, Fred has nearly forgiven us for bringing in two new dogs, and he’s become a romping demon. Enforcing the No Playing in the House Rule is a challenge. Fred chews on Fritz anytime the pit bull is within range, but he’ll also play with Dingbat Travis if Fritz isn’t available.

Meanwhile, when it comes to the humans, Travis and Fritz are total love muffins. Even Fred is gradually learning to tolerate more affection, albeit with the grace of a teenager.

All in all, at the risk of anthropomorphizing, the dogs seem happier. I know the humans are. It’s amazing what a little time and patience (and a lot of hydrogen peroxide) can do. But it is a lot harder to get in and out the front door now. 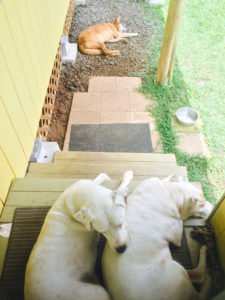 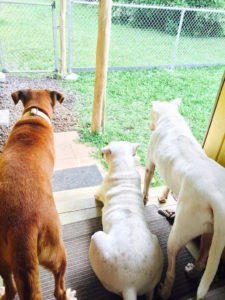 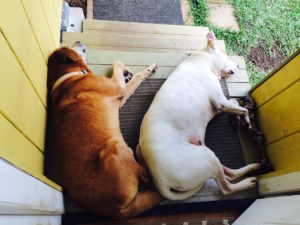