Hello, happy readers! Or should I say, antsy readers? (Not to be confused with anty readers; if one tenth of the stupid little ants in our house owned mini ereaders and downloaded my books, Sydney would rocket to the top of the ‘Zon charts.) 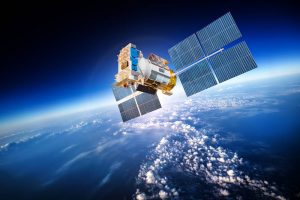 Well, good news—today I hit the 70,000 word mark on the rough draft of the fifth Sydney Brennan book. I’m anticipating 100,000 words, so while I’m not in the home stretch yet, with one of those satellite level views, I can at least see the end in sight (even if my book is roundish like our pretty planet instead of linear).

It hasn’t been easy. I’ve written before about the hazards of distractions (Distractions versus Butt Glue), but I’m revisiting the subject because, like that funny little dry spot on your elbow, they never goes away.

Most of my distractions lately, including my production getting seriously off track last month, have been dog-related.

You may remember that we adopted a couple of malnourished, worm-infested strays (Just When You Think You Have It All Figure Out). For several weeks, the three dogs (the two newbies plus our original dog) randomly tried to kill each other. Seriously. Our house would look like a serial killer crime scene with one of those CSI lights.

We’re hoping (knocking on my desk) we’re past that phase now since we’ve gone a couple of weeks without any canine (or human) bloodshed. We had a fence installed so they could kill each other outside (contracted, because it’s no mean feat on lava rock; think pile-driver and generator), which then had to be further dog-proofed (martyred husband-toil, and nearly finished).

I guess finally installing flooring in half of our house (quite creatively, since the first six boxes had no directions) is all on the humans, but ironically the new slippery footing has made the two white dogs—for the first time—purposefully playful. Although he still has a nasty scar, #1 (Fred) has apparently decided to let bygones (or bites to the bone) be bygones and tries to romp with #3 (Fritz) every time our backs are turned.

In some ways, violent mayhem policing was easier. 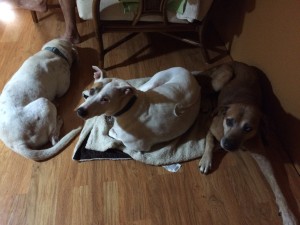 This romping starts cute, and by the time you’ve decided you should put a stop to it, it’s too late. It’s on. And they outnumber us. Of course, poor #2 (Travis) is too maladapted to have a clue (and hasn’t yet been Fixed) so he just gets in the way and occasionally humps, which hopefully won’t bring us back to the Killing Each Other cycle.

At this very moment, I can hear Dingbat Dog (a.k.a #2, Red Dog, Brown Dog, or more officially, Travis) wandering around the house, looking for something—a place to pee, cat food, bathroom trash … every time you think you’ve got one of his potential misbehaviors down with preventive measures in places, he adds something new.

This is where we segue into the Public Service Announcement portion of our post. Because although it’s slightly annoying to get up and search out Mr. T (I forgot that appellation) and his budding shenanigans, I’m very glad he’s able to be a Dingbat today. (He must have heard me typing about him; now he’s laying down on a rug, being a perfectly cute, canine angel.)

Last night, Travis got spooked by movement in the dark when my husband took him out for his last bathroom break and bit a cane toad. 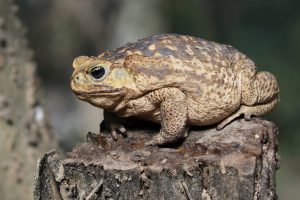 For those of you who don’t live in one of the lucky places like Australia and Hawaii and even parts of Florida where the invasive amphibians have been intentionally introduced and taken over, cane toads are very toxic to pets and sometimes even to humans. One of our friends had a dog who died from a cane toad interaction—not a little lap dog, either.

And the big buggers are everywhere here. I have literally tripped over these large legacies of the sugarcane industry in our yard. (Yes, I am admittedly grace-challenged, but it’s happened multiple times.) When we lived in downtown Hilo, it was a little creepy to watch dozens of them emerge from beneath the sidewalk.

Fortunately, the other dogs (with their mightier bladders) were still inside with me, and my husband had his wits about him.

What did we all do before Google was our primary care physician? 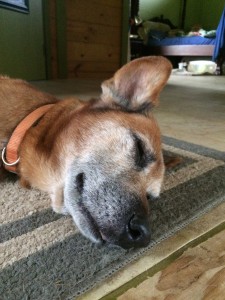 Other than nearly drowning the poor dog (point the muzzle down, huh? good idea) it seemed we had done everything pretty close to right—flush the mouth with water for ten or fifteen minutes and wipe the gums, tongue, and roof of the mouth. Travis did paw at his face for a while, but he didn’t shiver or get disoriented or have convulsions, so we figured he was probably going to be okay and we could skip another trip to the emergency vet.

We’ve had so many vet appointments in the past two months, I’d need a clicker to keep count. Or I guess our credit card statement would do. 😳

This is why #2 is Dingbat Dog. He seemed fine today, but the humans have been struggling a bit, probably because every time Dingbat moved during the night, we both woke and listened to make sure he wasn’t have a seizure. I blame the resulting sleep deprivation for the meandering quality of this post. That said, I still hit my word count. Chugging along… I can hear those last 30,000 words down the track.

Or is that Dingbat chasing the cat?