The Blog turns One Hundred today—woo hoo! Well, at least this is one hundredth entry posted, so I thought I’d share something special. Today’s Stories I Love features the book that got me (for good or ill—depends on who you ask) to finally jump into the world of indie publishing. Nope, it’s not nonfiction. It’s a mystery. And a sci fi. A mysti-fi? 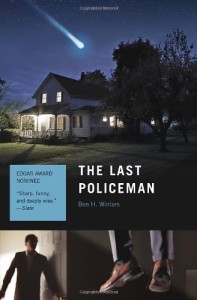 Imagine that an asteroid is going to hit the Earth. We don’t know exactly where, but we do know when—six months from now—and we know it will be catastrophic. What do you do with your remaining days, and how do you face what’s coming? As a spouse, a parent, a sibling, a pet owner, a person alone …

For Henry “Hank” Palace, the protagonist in Ben Winter’s The Last Policeman, the announcement of the world’s impending doom ironically brings about his heart’s greatest desire—a promotion to the rank of detective. The Concord, New Hampshire, police force has been hit hard. Some officers have gone Bucket List (run away to do some of the things they’ve talked about doing their whole lives). Others moved to be closer to families, or succumbed to malaise and simply stopped showing up. And then there are the suicides. As Henry says, “It’s hanger town.”

In fact, the book starts with Henry responding to an apparent suicide in a fast food restaurant, except Henry thinks it may be a murder disguised as suicide. As a reader, thrown into the middle of it all and still getting acclimated to a world that knows its end date, you’re initially uncertain—is Henry a gifted investigator? Or is he reading something into this man’s death that isn’t there, making questions where there really aren’t any? Perhaps he’s trying to give meaning and purpose to the slowly unraveling world that acts as the investigation’s backdrop.

Disagreements among nations about whether to nuke the asteroid threaten what global stability remains. There are conspiracy theorists who think the asteroid footage is the latest Zapruder film, while secret government programs plot to ensure the survival of a portion of the human race. Of course, for flesh and blood individuals, the big picture matters less and less as the asteroid approaches. Internet and cell phone services deteriorate. As these and other infrastructure, including interstate highways, are gradually cut off, connections with the “outside world” are lost. The local reality becomes the only one that matters. 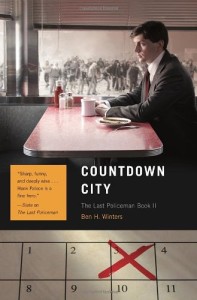 None of these things, so far as I know, has happened in Concord. Still, the conscientious detective is obliged to examine the question of motive in a new light, to place it within the matrix of our present unusual circumstances. The end of the world changes everything, from a law-enforcement perspective.

—The Last Policeman, by Ben Winters

If that doesn’t make you want to read The Last Policeman, then it might not be for you. Reading those paragraphs makes me almost giddy, but I love these books. They are so well-written, combining and bending (not just blending) genres so well that scenes we’ve come to expect instead become surprising. That’s probably why The Last Policeman won the Edgar Award from the Mystery Writers of America, while the second book, Countdown City, won the Philip K. Dick Award for Distinguished Science Fiction. And I haven’t even touched on Henry’s family history, on the sister who manages to pull him into her dramas even as the world is ending, or on the tenderness Winters shows toward his characters even as he make their lives so difficult. 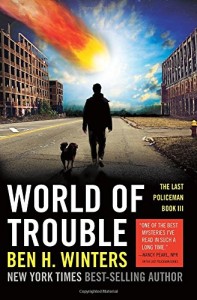 My husband bought me the rest of the trilogy for Christmas last year, but I <mumble, mumble, mumble>. What’s that, you ask? Okay, okay, I haven’t read them yet. I read the second one, but I haven’t read the final book, World of Trouble, because I’m not ready for the series to be over yet. (By the way, annoys my husband to no end because since it was a gift he says he technically can’t read it before I do.) Book Two ends in a way that gives Henry the option of a pleasant, relatively easy way to spend the last few months of the world as we know it. Except, of course, he doesn’t, because that’s not who he is. (And then it wouldn’t be a trilogy. A duology?) To me, that’s what makes this series so good. The coming asteroid isn’t just a plot device; it’s a way to cut to the heart of who the characters are. It’s like a polygraph for the soul.

But be careful if you pick up The Last Policeman. There’s an excellent chance you’ll be well-entertained, but there’s also a decent chance that this “existential detective story” (the author’s words) will make you think. And then you might just find yourself jumping out of an airplane. Or publishing a book.