I am a superstitious person. I’m not obsessively superstitious, knocking on things right and left, or swerving out of my way to avoid cracks or black cats. (I do avoid walking near ladders, but that’s because I’m a klutz.) I’m not even consistently superstitious. But superstition sneaks in around the edges of my peripheral vision, like the supernatural logic of a Stephen King novel. I tell myself it’s the by-product of a gifted imagination. (Feel free to use that excuse yourself.) Whatever the reason, I do feel funny sometimes about sharing good news, or at least sharing the cessation of bad news. This is all my long-winded way of saying—whispering really—shh, don’t tell anybody, but it looks like Pahoa might not get buried in lava. This time. 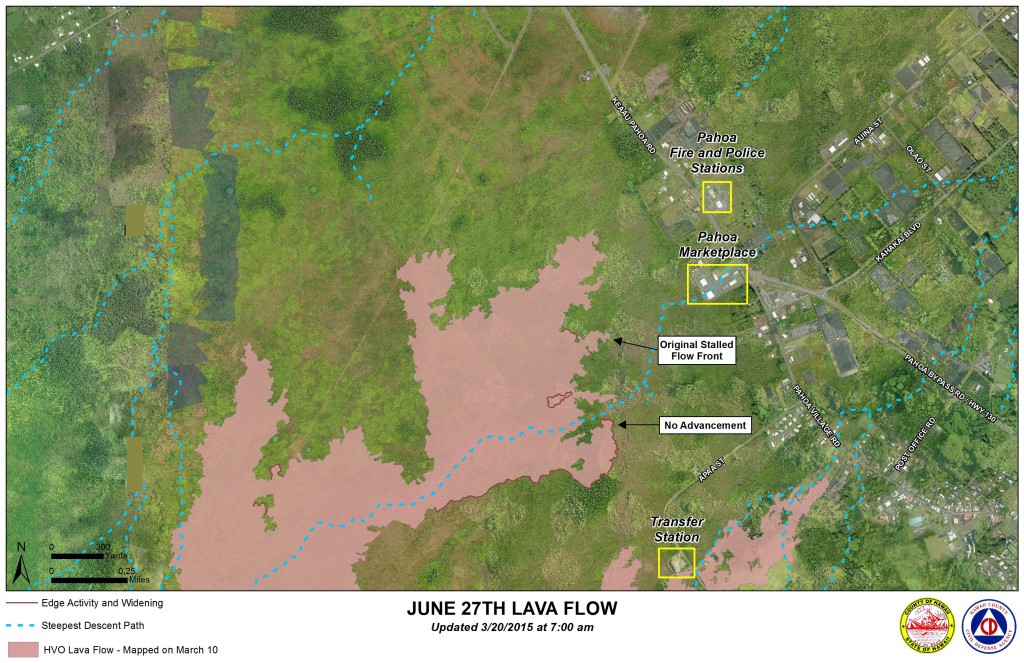 In case you don’t follow my blog regularly, or never caught one of the short, curiosity stories on a slow news day, on June 27, 2014, a new lava flow started a 14-mile march toward the Big Island town of Pahoa. Creeping really. Kilauea has been continuously erupting since 1983, so it was a good month or two before anyone in lower Puna started paying attention to this particular flow. Fingers of lava keep advancing and stalling, then filling in again from the back. The short version of the past nine months of slow-motion disaster: the lava stalled out less than 200 yards from the Pahoa Village Road; came within several hundred yards of the Pahoa Marketplace and Highway 130 (the main road in and out of lower Puna); and finally came within several hundred yards of the Pahoa Fire and Police Stations. (For the longer version, you can check out my previous posts: Swallowed by Lava, Errands before the Apocalypse, Hitting Pause, Postcards from the Punatic Edge.) We’ve had brushfires, smoke and volcanic fog, and raining ash (also a drought, speaking of rain). But for the past few weeks, the only active breakouts have been about 8 miles upslope. Thermal imaging shows that the tube system is still hot enough to transport lava (and could even still be doing so), but for now (superstitious person knocking on her desk) nothing is coming out downslope. 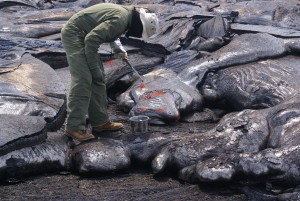 So where does this leave everyone? The grocery store and gas station and medical center and most of the other businesses in the Marketplace have been reopening piecemeal over the past few weeks. The Pahoa transfer station, previously breached by lava, is now reopened as well. Improvements to an alternate route providing lower lower Puna (Nanawale, Leilani, etc.) access to Highway 130 in case of lava crossing (or other unforeseen disaster) have been finished. Highway 130 lane additions are ongoing and make any trip to Hilo potentially a special level of hell, even at odd, off-peak times. Scientists continue to monitor the situation, as do most residents of lower Puna. Personally, I’ve relaxed enough to check the Kilauea lava report every day or so instead of morning and evening. Of course, as the local paper and volcanologists keep reminding us, Mauna Loa is still active, too. That volcano’s 1984 eruption traveled 15.5 miles in less than a month, stopping about 4 miles from Hilo. Eruption isn’t imminent, but in for a paranoid pound … 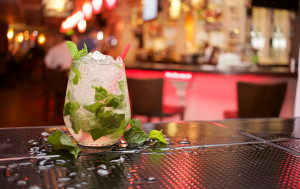 So (after enduring the long answer), the short answer is, this leaves Punatics in a state of uncertainty. Nine months is a long time to be on edge. It would be nice to be able to take a big step back from that edge. If I were a more enlightened person, I’d say everyone everywhere is in a perpetual state of uncertainty; lately we’ve just been more aware of ours. Since I’m not, I’m wondering if it’s safe to break out the blender. Having lived on the Gulf Coast, I’m familiar with Hurricane Parties. What does one serve at a Stalled Lava Party?