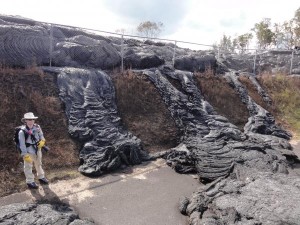 Okay, so this is the part of the blog where I share the trials and tribulations of living in Hawaii so you don’t spend your wintry days pining for far, exotic shores and feeling resentment toward the people who live there. Our challenges admittedly do not include snow flurries, but we do have flurries of white stuff. (Not sand; we don’t have white sand in east Hawaii.)

I live in lower Puna on the Big Island, the home of the active lava flow.

Kilauea has been continuously erupting since 1983, but a particular portion of the June 27, 2014, flow has been giving us headaches, as I’ve shared in previous posts [Swallowed by Lava, Errands before the Apocalypse, and Hitting the Pause Button]. First it was going to hit the town of Pahoa, but in early November the front stalled out 170 yards from Pahoa Village Road. A breakout breached the transfer station above, but stalled out after burning asphalt for a few days. Then a finger was going to hit the Pahoa Marketplace by Christmas (and cross Highway 130 shortly after), but the front stalled out 580 yards from its target. (Most of the businesses in the Marketplace area remain closed.)

You can see from the maps that each time a lava front stalls out, another one starts up from the rear, gradually filling in the middle. 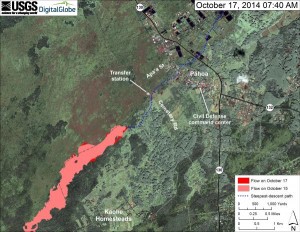 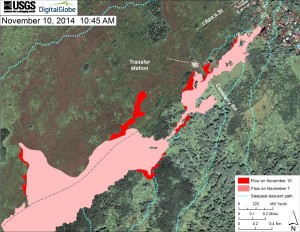 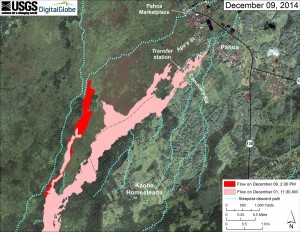 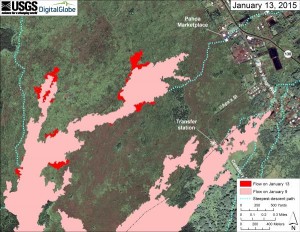 We normally get a lot of rain in east Hawaii (averaging around 150 inches a year in Pahoa) but it’s been dry for weeks. That’s not a big deal in most places, but most places have soil. Here, the grass gets wilty and crunches after a couple of days without rain, and our unpaved street feels like the set of a Mad Max movie. You can see vehicles on the horizon by their clouds of dust, and I’m thinking of shopping for a steam punk cap and goggles to wear while walking the dog.

Which brings me to our current lava-related issue: brushfires.

Because it is so dry, and because apparently lava is really hot, we’re getting brushfires at the edges. The worst ones so far started a few days ago. Chunks of ohia leaf ash and charred uluhe fern made their way through the cracks and crevices in our house and landed on my head.

When I looked outside, I could see crap everywhere, falling from the sky. At first I blamed my trash-burning neighbor, unable to imagine ash would travel that far, and unable to find any confirmation online of an active brushfire. But as I drove out of our neighborhood, I could see black fern chunks twirling high in the air for miles. The vog (volcanic fog) was so bad all the way in to Hilo that day, I kept expecting to pass a pick-up full of orcs. 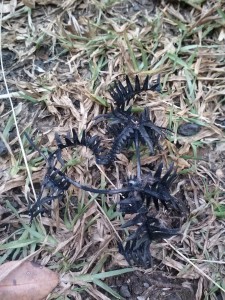 Of course, where there’s ash, there’s smoke. Thursday the smoke was so bad I closed all the windows and turned on a fan in the house.

Hawaiian houses aren’t exactly built to be airtight, and ours is no exception. The triangle beneath the peak of our roof is screened to keep the bugs out, but open, so closing the windows doesn’t always do a lot. (That’s also why it can drop down to the 50s in our bedroom at night.) Thursday when I felt something on my head (thankfully not gecko poop) I looked outside to see sunny tropical snow flurries… of white ash.

The Fire Department is definitely earning their pay this month, working with helicopters and bulldozers to ensure there are firebreaks between the active lava and the next closest subdivision (which is not ours; hang in there Hawaiian Homelands and Ainaloa!). I can’t imagine the logistics, working from unimproved roads and in areas with no easy water access.

Did I mention almost all of the homes in lower Puna are on catchment water? So as our dry spell continues, some people need water truck deliveries to top up their water tanks. Fortunately (knocking on the dining table), we are not so short that the dog couldn’t have a quick bath this evening.

[All lava pictures and maps are from the Hawaiian Volcano Observatory at http://hvo.wr.usgs.gov/; charred uluhe fern from my yard by Judy K. Walker]

2 Replies to “Postcards from the Punatic Edge”