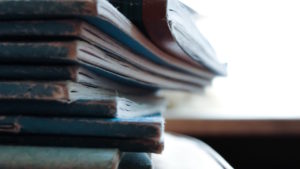 I’m generally a fiction reader, but I’ve been hitting the nonfiction hard lately. I go through phases where I dip into half a dozen or so different books scattered around the house. A few hardcovers and an ereader will be stacked on my nightstand (along with a couple of notebooks, and pens, and receipts, and whatever else hasn’t fallen off yet). No more than one book from the “currently reading” pile will be fiction; I am constitutionally incapable of reading more than one fiction book at a time. The nonfiction books fall into subject clusters—often a book or two about writing, and the rest about whatever random topics interest me at the moment. The random topics are usually related (directly or indirectly) to my work in progress. So what’s weighing down my nightstand right now? 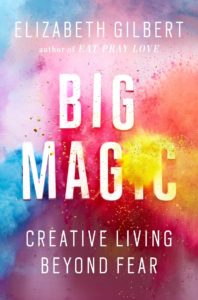 Elizabeth Gilbert’s book about creativity, Big Magic: Creative Living Beyond Fear, has been migrating with me from room to room this week. In it, Gilbert occasionally discusses her writing process, but overall the book is a manifesto dedicated to encouraging anyone and everyone to explore all kinds of creativity—from figure skating to gardening to inventing to photography to macrame—whatever it is that you want to do creatively.

Gilbert both demystifies creativity, tackling some of its more persistent and pernicious myths (especially the correlation between creativity and suffering), and elevates creativity to the realm of Magic. Magic magic—like wizards and fairy dust magic, not metaphorical or allegorical magic. She’s convinced that ideas seek out people for help manifesting in our world, but that we also have to work our butts off to make it happen. It’s a delicate balancing act, according to the book jacket, between “soulful spirituality” and “cheerful pragmatism.” If you pick up the book (and I recommend you do), Gilbert’s thesis and voice will either drive you crazy or make you laugh out loud. I hold down the laugh out loud end of the spectrum. She also argues (again, against the current mythology) that being creative doesn’t make us crazy; it keeps us sane:

Possessing a creative mind, after all, is something like having a border collie for a pet: It needs to work, or else it will cause you an outrageous amount of trouble. Give your mind a job to do, or else it will find a job to do, and you might not like the job it invents (eating the couch, digging a hole through the living room floor, biting the mailman, etc.) It has taken me years to learn this, but it does seem to be the case that if I am not actively creating something, then I am probably actively destroying something (myself, a relationship, or my own peace of mind.) 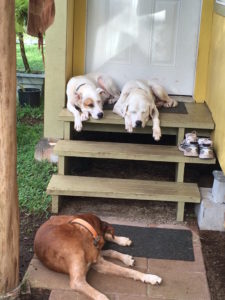 Bored dogs and a pair of unattended shoes? Bad combination!

Wow. As a person who regularly witnesses the effects of boredom on canines of various breeds in and around our house, as well as the effects of my own ennui when my mind chews away at my cranial furnishings, all I can say is wow. Well, of course, that’s not all I can say. I used to be a lawyer; when the mood strikes I can say a lot.

I will admit to reflecting a bit on my Brain Canine. In other words, if my mind were to be embodied by a dog, what type what it be? Try it yourself. What does your mind look like when it chews on the couch? Terrier was my first inclination. You know, that frenetic how-did-the-dog-break-the-toilet-on-her-way-to-the-window kind of energy. (True story, by the way.) On second thought, I decided my mind would be more like our dog Fred, the Rhodesian Ridgeback mix. From the outside, he seems quiet and perfectly well-behaved. (Granted, he is quiet; I think he’s barked twice in nearly three years, both times making me certain a serial killer/Stephen King monster was about to come through our door.) But then, having exhibited months—nay, years!—of apparently exemplary behavior, you leave Fred alone and he suddenly decides to eat a bag full of avocados from your dining table. Or eat his bed. (Upon reflection, of course, you realize the signs of a mental break were there.) Fred also lies around, seemingly content to do nothing more than blink and breathe, but will occasionally (and suddenly) leap in the air and run around like a demon is chasing him (hoping that another dog actually will). Yeah, that’s my Brain Canine alright. 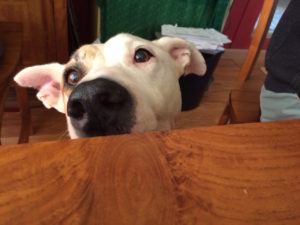 Fred, my Brain Canine, breaks the plane of the breakfast table with his nose

In next week’s blog, I’m going to share some of the other books cluttering my nightstand because they’re research. Yep, I’ll share a few hints about my current work in progress, and it’s probably not what you think.

Speaking of current works, I wanted to let you know that I’ll be raising the price of the Braving the Boneyard ebook from $4.99 to $5.99. Boneyard was an expensive book to produce—almost as much as my previous four books combined. In part that’s because prices for publishing-related services have been gradually creeping up, but it’s mostly because Boneyard is such a long book. More pages means more editing time (developmental and copy) and more money. I’m keeping it at $4.99 a little longer for Sydney’s die-hard fans, but if you haven’t bought it yet and want to save a buck you’ll need to buy it before June 20, 2016.