[Quick reminder: Magpie Moments refer to bits I snatched from real life and incorporated, magpie-like, into my fiction.]

The post title doesn’t refer to twelve-year-olds at a pizza party or college students on Spring Break, but rather to beloved pets, and a scene from my most recent novel, The Perils of Panacea. In it, Sydney asks a couple about the origin of their pet pig’s name. 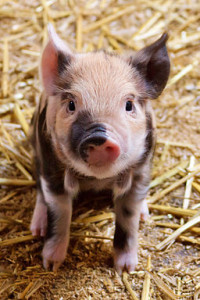 “Why Banana Whiskers?” I asked.

Danny smiled. “BW was the runt of his litter, and so sickly when he came to us that Sam wouldn’t let me name him. She didn’t want me to get too attached. Since he was so tiny, we let him have full run of the house—”

“He always had full run of the house,” Sam put in.

“True,” Danny admitted. “Anyway, the little guy hung in there. About a week after we got him, I’m in the back room, and I hear this unearthly shrieking, like someone being murdered. I run out to the kitchen. I’d set a bag of bananas aside to brown so I could make banana bread. Unfortunately, I’d left them on a low shelf with a stool alongside. Here’s this little pig, stepping up pretty as you please, pulling bananas out of the bag one by one.”

“Shoving them in his fat face,” Sam said.

Danny laughed at the memory. “Yes, he was. He had banana all over his face and all over the floor, and he was just shrieking with joy. I salvaged enough for two loaves of bread, and from then on, whenever we had bananas I always saved him one.”

“One bunch,” Sam said, leaning over to take Danny’s hand and give it a squeeze.

-Chapter 24, The Perils of Panacea

Although I grew up in West-by-God Virginia, I’ve never had a pig for a “pet.” (No matter how much joy they bring in life, “pet” status usually ceases upon death for the wellspring of Bacon.)

But I can definitely see the appeal.

Pigs are smart, and they have personality. In Hawaii, wild boars roam our rural neighborhood at night, and their piglets root in our compost from time to time. Most of them are all black, but you get the occasional white one with black spots. Wow, are those buggers cute! The feral boars and sows can be dangerous, but if you catch them young enough, the pigs can often be tamed.

Not long after we moved into our current house, we met a cloven-hoofed welcoming committee on a neighbor’s property. The wild-looking, hundred-plus-pound boar ran through a field straight at the fence. And us. It took quite a bit of chuffing and fence-rubbing before he convinced us he was a pet. Then he blissed out while I scratched between the bristly hairs on his forehead. (Unfortunately, I suspect he transitioned from pet to freezer filler soon after that.)

So I guess I’ve had enough exposure to pigs over the years to have an appreciation for them, even though they’re no longer on my menu (only fake bacon for me), and despite that fact the feral ones raid our sweet potato patch the moment it’s ready. (At least the area’s been rototilled for the next crop.)

The pigs here have a fondness for bananas, too, but I’ve never known a swine banana addict who raided his (or her) humans’ indoor banana stash.

Dogs, on the other hand … 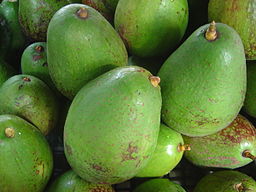 I have to preface this by saying that our dog Fred is indisputably the Best Dog in the World. However, I have discovered his Achilles heel: avocados.

We’ve lived in several different places on the Big Island, a couple of which were Avocado Heaven, with the kind of fruit quantity and quality that turn you into an avocado snob, and turn avocados into a staple food. (I like mine simple—halved, with a little Tony Chachere’s Creole seasoning.)

But right now, we’re in an avocado wasteland, with no producing trees of our own. We rarely eat avos because we can’t bring ourselves to pay exorbitant supermarket prices for overseas fruits when they’re rotting on the ground in people’s yards on island. 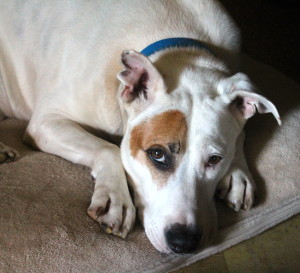 A while back, a friend with a tree was kind enough to bring us a paper bag full of avocados. I left them on the dining table. And I apparently left one of the dining chairs (but not a stool) pulled out just so. See where this is going?

I came home late that night to find the bag still on the table—intact, with a few remaining avocados—but avo carnage (pits, and some licked-clean skins) on the floor next to a very borborygmic dog.

Unlike Sam and Danny, I did not laugh. I was afraid Fred would get seriously ill, but although it threw his digestion off a bit, he recovered with no lasting effects.

Including the effect of deterrence.

We recently unthinkingly put a tiny, inedible (to us) avocado in our fruit bowl on the table with a single juicy orange from our own tree that we’d been waiting for months to eat.

Not only was the avo assaulted, the orange had been plucked from the bowl and punctured as well, just in case. Okay, so the Best Dog’s halo is a little tarnished. But look at that innocent face … Or maybe it’s penitent.

[Cute piglet by Petr Kratochvil and Avocados by David Monniaux, both via Wikimedia Commons; Fred, the Best Dog in the World by Judy K. Walker]