This week’s blog post will be on the brief side, but I have a feeling you’ll forgive me when I tell you I’m writing it in LAX (3 a.m. Hawaii time) on a borrowed computer. (Don’t worry—it’s my husband’s, not some random person foolish enough to nap with their head on a jacket instead of their laptop.)

It’s been a crazy week. Let’s start with the Bestest Part, since that’s more accurately Dickensian. I had a BookBub ad this week, which probably doesn’t mean anything to you unless you’re one of the million or so voracious readers on their list. They’re not the Cadillac of book ads; they’re the space shuttle. They’re also about that tough to get your hands on. And they ain’t cheap. But they’re worth it. Yes, ladies and gentlemen, what is that familiar cover appearing in the #1 spot in the entire Kindle Free Store earlier this week… Back to Lazarus! Insert Kermit the-crowd-goes-wild sounds here.) 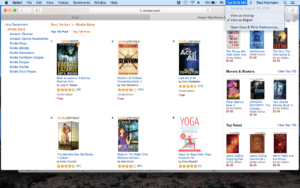 It was only a few hours of glory, but it was shocking and awesome. 🙂

Now, the less Bestest part. Remember that little laptop issue from last week. Well, I’m devastated to say… the tech dingoes took my baby! (Sorry—it is 3 a.m.) Took it in on Saturday and went through withdrawal all weekend only to get a call on Tuesday: “Blah blah top case blah blah logic board. Blippity blah blah $$$ blah mainland blah blah one week.” One week! Yeah, thus the borrowed laptop and the not yet started manuscript I was due to start this week.

Among other contributing factors to my lack of productivity (and the less Bestest status), we had to prep for a hurricane. (Ohia trees have very hard wood, even when they’re dead, says our poor little overmatched battery powered chainsaw.) Thank you, Madeline, for being an underachiever and turning tropical storm—lots of heavy rain and some wind, but nothing crazy. Which left a few hours the day after Madeline (everything was closed the day of and crazy the day before) to run errands before hopping a flight to the mainland (just ahead of Hurricane Lester, which is why we didn’t bother reattaching our satellite dish and had no internet). Highlights included going to four stores to find fish food and my husband going to two trying to find a new water pump. Oh yeah, our water pump went out, too. :p Then there were two trips to the kennel to transport our four animals to be boarded. (Seemed prudent when Ninja Kitty protested his carrier confinement in a ceaseless and—apparently, to the dogs—prey-like voice.) As we stood in our bedroom afterwards, doing that near-catatonic pirouette you do when you don’t have a clue what you’re supposed to do but know you’re forgetting things, the overhead lights started to flicker. That’s when we decided to get out while we still could.

Excuse me now while I go nap on someone else’s laptop.