Oh my God, it’s Friday again. How did that happen? It’s been one of those weeks like… I’m grasping for an appropriate metaphor. Okay, I’m not a big Star Trek fan, but if you imagine the Enterprise having some warp engine issues, moving slowly, then lurching forward in big jumps, as if Scotty is just learning how to drive a manual transmission… that’s my week. (Btw, in my imagined Enterprise, Bones is played by Karl Urban, because duh! Karl Urban.) Let me give you a few highlights. 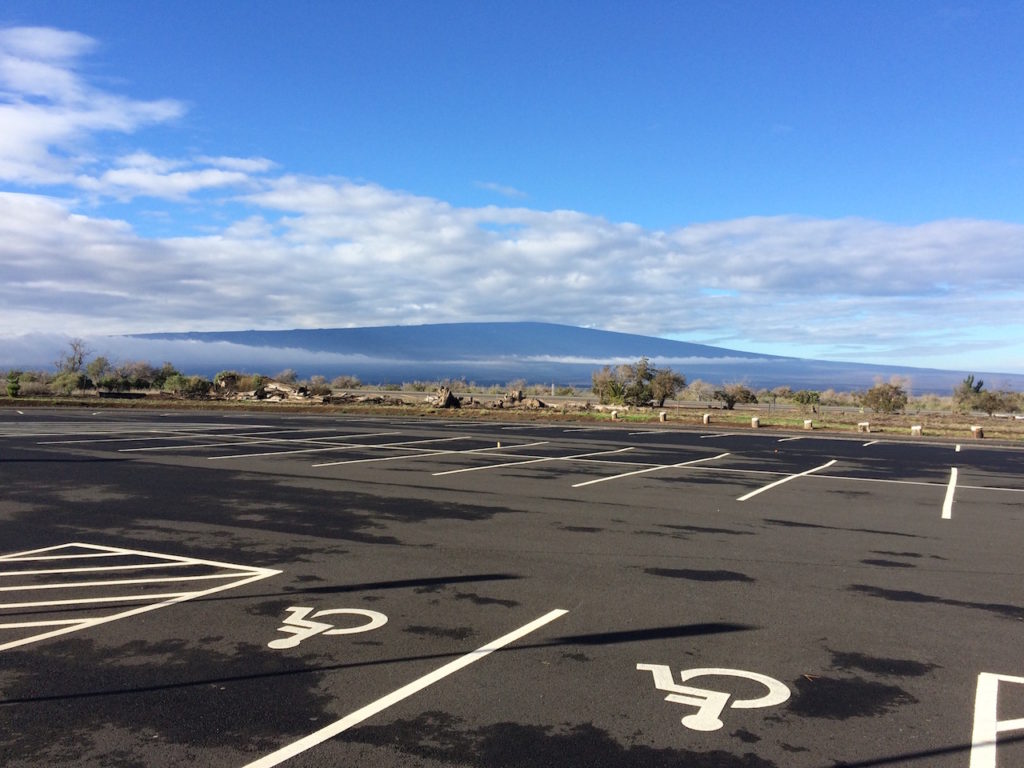 The week started with several days of constant rain and near-constant thunder. Monday was probably the heaviest rain (admittedly, five inches hardly merits a mention when you average over 150 inches per year). My husband had a way-too-early drive to the other (dry) side of the island for work. He texted me this picture on the way back, from the Mauna Kea rest stop on the moonscape of Saddle Road. Note the completely empty parking lot in the middle of nowhere. A minute or two later, I received a text: The car won’t start. Of course, this would also be just moments after a tow truck had left the parking lot. Thankfully, a pickup full of Good Samaritans happened along a few minutes later with jumper cables. No harm done, except for the mental strain of trying to figure out why our otherwise awesome hybrid had suddenly crapped out, and juggling/coordinating our travel for the rest of the week to ensure neither of us missed anything important should we be left sitting somewhere.

Meanwhile, back in Puna, the thunderstorms started. They continued all afternoon and all night, into the wee hours. It was well beyond the power of the Thunder Shirt and copious calm treats, at least for Fred, our biggest dog. He actually bent the metal of his crate before hiding beneath our bed. (Reclining on the mattress, it was like experiencing the birth of a mountain.) Even that wasn’t enough, and eventually (around four a.m.?) my husband piled on top of the dog on the floor. The squishing seemed to help. They may or may not have fallen asleep that way. 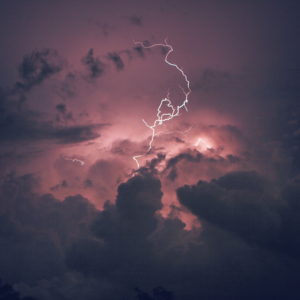 Tuesday morning, I looked and felt like a zombie when I rolled out of bed and drove through the rain to a better internet location for a podcast interview with Alexandra Amor. (It will probably air sometime in September; I’ll be sure to share the link.) I really enjoyed speaking with Alexandra—no one understands the special brand of writer crazy better than another writer—but I was so sleep-deprived I was punchy. I’m not sure exactly what I said, but at least I’m pretty sure I didn’t sing. (You should be glad of that.) Then I hurried to run some errands and made it home just in time to find Fred panting like he’d run a marathon. Yep, the thunderstorms had resumed, and they continued into the night. The smart thing my husband did: he got some Valium from the vet. The dumb thing he did: not getting any for us. Just kidding! But we did start with a one pill dog dose instead of two, and the first half of Tuesday night was sleepless, too.

Fred woke up entirely too perky on Wednesday (see—the humans should have had Valium). I stumbled out of bed, just managing to shower and grab a cup of coffee before three hours of online meetings. I looked and felt like a zombie—see a pattern here?—and I’m not sure what I said, but I’m pretty sure I didn’t sing. I did dance (on camera) when a fire ant crawled in my shirt and bit me. And also for the next twenty minutes while I tried not to scratch the burning bite. My internet connection wasn’t fantastic, and even though I had no trouble speaking (other than my sluggish brain, I mean), I assumed the poor connection was why I couldn’t type in the Chat portion during the second meeting. Yeah… no.

Imagine my surprise Wednesday afternoon when I sat down to write a last-minute freelance article, only to find that my laptop wouldn’t type. Seriously. Would. Not. Type. At first, it was just a few keys (how important are Js and Ks, asks a person with three in her name), then the whole middle row. Fortunately, I bought a USB keyboard a couple of months ago, so I was able to get my project out today, along with some other things I was working on. I’m supposed to start writing the first book in my new series next week (I was outlining it this week), so cross your fingers that I’m able to find someone to heal my MacBook. Even if his (or her) name isn’t Scotty.

Btw, next week I will double up on the short story chunks. Promise. :p Now I’m going to take a nap.