Okay, I’m gonna be straight with you guys, my blog peeps, because that’s the way I roll. (Is that an 80s or 90s flashback?) Originally, I’d thought sharing the Club Revelations short story here would be a good way to make sure I actually finished it. I also thought it would be a good way to cover my weekly blog post while I’m distracted by other stuff (stuff I will share in the coming weeks). Great strategy, until I decided to post the story on its own page rather than in lieu of a blog post, effectively doubling what I have to post every week. <Minor head explosion.> Now that I’ve cleaned the brain matter from my bookshelf, you can read the next installment of the Sydney Brennan short story (as well as the previous ones you may have missed) on this page. 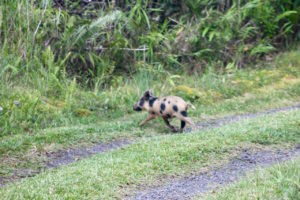 Most of my distractions are related to my current work(s) in progress, but—as regular readers of this blog have no doubt anticipated—some of them have four legs. At the risk of triggering some sort of cosmic backlash (as I did after a recent pack update, noted in More Than A Little Stitious), I have to say that the dogs have been doing pretty well behavior-wise.

Yes, the roaming pigs send them into the occasional frenzy, but that frenzy hasn’t been directed at any other creatures. Even ones who may—arguably—be deserving.

Ah, yes, this is where the Ninja Kitty rears his Puckish head. What’s this you say—the pack has stabilized? Well, then, it’s time for me to shake things up a little. 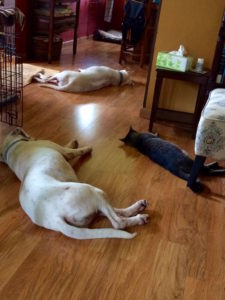 There are moments when it seems that Ninja thinks he is part of the pack. He’ll nap alongside the dogs, or partake in pack rituals.

For example, although Ninja demands food first thing in the morning, he only wants enough to take the edge off. Then he sneaks out the back door to chase my husband and the dogs up the driveway. When they return from their walk, he alternates between crouching in the weeds and doing strafing runs or lying in wait in plain sight, daring the dogs to walk past him without flinching. Then Ninja runs inside and jumps up on his table so he can eat breakfast at the same time they do. He does the same thing in the evening: snack, strafing, lie in wait, strafing, dinner.

But there are other times when Ninja is determined to prove he is most definitely not part of the pack. Say when he lies in wait on a dining chair, bopping whichever canine is unfortunate enough to walk past. Or recently when Fritz and Fred were on the front steps and Ninja mewed at Fritz… right before sinking his teeth into the side of Fritz’s face and making his escape through the steps and under the house. (Fritz—to Ninja’s disappointment—ignored the attack.) Or the day after that when I went outside to see why the dogs were barking and found Ninja casually tormenting a dove just outside the fenced yard, inches from the dogs’ faces. (Ninja and the bird lay in a ring of plucked tail feathers, but the bird seemed otherwise unharmed; I carried it up the driveway to some dense undergrowth, but I wasn’t overly optimistic about its prospects.)

Ninja seems to have been particularly bored this week, and his Puckish attentions aren’t limited to the dogs and persecuted pigeons.

I am the Cat Doorman (still waiting for my badge), and he continually mewls to come in, only to wander around the house—still mewling—for a few minutes, occasionally pausing to harass Travis, until I can’t take it anymore and put the cat outside. Within minutes, it begins again. Mewl. We’re not even safe at night. Wednesday, the little bugger jumped on my chest in the wee hours. It’s probably good that I was sound asleep; I may have accidentally tossed him through a window. Somehow it wasn’t comforting to learn from my husband the next morning that I was not the cat’s only victim. 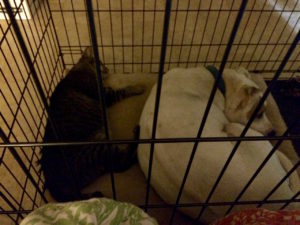 But I do wonder if the tide is shifting against our Loki.

A couple of weeks ago, Ninja got in Fred’s crate, walking past the already curled-up-for-the-night dog. Fred usually bows to the cat’s pressure, so we expected him to slink out of his crate, but he dogged up instead (isn’t man up sexist and anthropocentric?). Fred curled into a tighter ball and slept with a sprawling cat at his back for most of the night. No bets on how well he slept.

Even Ninja’s favorite target is beginning to turn the tables on him.

Travis is usually easy pickings, being the most insecure and unstable dog (and the most likely to trigger a bloodbath). Ninja’s latest Puckish habit is climbing into Travis’s crate when Travis isn’t in it (or on top of it when he is), so I’ve spent a lot of time and energy shooing Ninja out lest the Dingbat’s head (and teeth) explode. 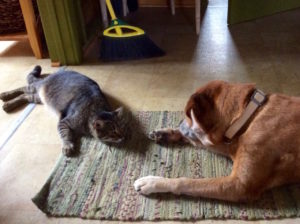 One night this week, my husband and I were about to forcibly remove the cat from Travis’s crate to tuck the dog in for the night when—to our surprise—Travis brazenly entered the crate on his own. With the cat.

We held our collective breath (I like to think the other dogs were watching, too), waiting for the fur to fly … and Ninja slowly left the crate, looking like he’d just suffered a catastrophic disappointment. Let’s just hope the cat suffers more of them. Some of us have work to do.