Dad, I used your joke.

That dedication to my late father starts the third Sydney Brennan PI Mystery, The Perils of Panacea.

It’s a hard one to live up to. Not because of any emotional baggage or anything like that on my part. Some might suggest it’s because our digital reading tech (e-readers and reading apps) is so close to where it needs to be, but not quite there…

I write fiction, so I prefer to think someone somewhere is an evil math joke hater.

“The area of a circle and pastries. I know. Geometry was the last math I really understood. Cute. So, this adventure?” I asked.

—Sydney Brennan and Mike Montgomery, The Perils of Panacea

While writing TPOP, it struck me that on his day off Mike, an investigator with an aptitude for computing, would wear a T-shirt with my Dad’s favorite math joke.

Unfortunately, the joke is much easier to render graphically on a T-shirt than typographically in a digital book.

Here’s a quick peek behind the indie author curtain: I format my books in an awesome program called Vellum, then upload them to retailers and distributors, who do their own mojo before the books show up in their store and your browser. Sometimes their mojo totally messes up the formatting, with me none the wiser. 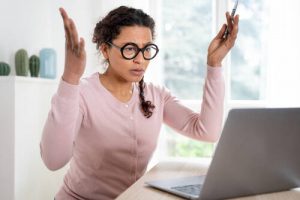 I usually buy copies of my own books from The Big Players, just to make sure that hasn’t happened. But my books also appear on subscription services, foreign stores, and little guys I’ve never heard of and might sell a book upon once in a blue moon. Since I don’t have unlimited time and money, those travel completely under my radar.

Which brings us to extra-special books like The Perils of Panacea.

Its math joke has caused me headaches since the moment I uploaded the book and a Kindle reader got far enough into the story to stumble across the glitching type (thanks, Lissa!). I get the formatting to settle down and play nice for a while, and then unbeknownst to me another platform update glitches it again.

Usually the special character (pi) appears as a box, like an unrecognized emoji. But sometimes, really bad things happen.

I recently got an email from a confused reader on a mobile-based reading app asking about a strangely abrupt ending to the chapter that contains the joke. After emailing back and forth, we determined her copy of the book was MISSING ALMOST 2000 WORDS—the bulk of the chapter!

But at least nothing important happened in the missing section, like say, dead bodies being discovered or anything.

Reader, that was sarcasm: dead bodies were discovered. 😱

So yeah, “fixing” that yet again is on my To Do list. As much as I hate to, this time I will probably resign myself to typing out Pi rather than using the Greek symbol. Of course, that still leaves the wily strike-through… But that’s a brain-teaser for another day.

I’m giving away a T-shirt that is my best rendition of the one Mike Montgomery wears in the book, or a coffee mug if you prefer. The mug also includes the above quote from the book, but the T-shirt is just the graphic.

This Giveaway is open to ANYONE SOCIETY6 WILL SHIP TO (i.e., pretty much anyone who is not residing on the International Space Station).