It’s time for another installment in my recurring series of Magpie Moments. These are bits I snatched from real life and incorporated, magpie-like, into my fiction. Literary Easter eggs, if you will.

How many of us—show of hands—have never ignored a car dashboard warning light?

Uh-huh. That’s what I thought. A lot of sitting on hands. 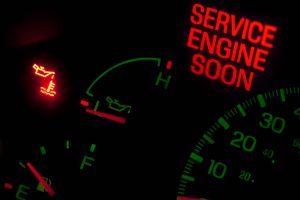 There is admittedly a hierarchy among the insistent little buggers.

I have a TPMS light that’s been glaring at me for about a year now. I refuse to pay that much money to replace a sensor whose sole purpose is to tell me, you know, maybe you should check the air in your tires.

Other warnings, one ignores at your peril.

Our old beater Volvo had a perpetual check engine light that we were tempted to cover with electrical tape. (I think we got the idea from an episode of Car Talk.) After all, it was such a tank that even if something catastrophic happened, we were bound to survive.

It did once strand us at a coffee shop, but if you have to get stranded…

Which brings us to my PI Sydney Brennan and her car.

Except in this particular instance, she’s not a PI yet. And the car is decidedly not her trustworthy Cabrio named Cecil.

I’d driven thirteen hundred miles from Boston, through one night and into the next, until my Check Engine light came on fifteen miles north of Tallahassee.

I flipped the bird at the orangey-red Check Engine light glaring at me from my ancient Tercel’s console (my new ritual) before cutting the engine.

End of the Road, a Sydney Brennan short story

My first car was a Ford Maverick about as old as I was. A single owner car, it still had relatively low mileage and the body was in good shape with one minor exception. The single owner must have been very large because the driver’s seat was shot. It was such a saggy crater, I had to sit on a pillow to drive. 😂

That was one of my objections to driving the beast, the other being its metallic, shit-brown color (as noted in Alchemical Abode).

My father liked the car except for its engine; he thought it had too much power for his teenaged daughter.

Pssst… Reader, he was right.

The Maverick gave up the ghost the summer before my senior year of college, and I was so excited to upgrade to a seven-year-old Toyota Tercel hatchback. I loved that it was just a “regular-looking” car and not shit-brown but an inoffensive light blue/gray.

Dad appreciated that it was unlikely to go over 100 mph on a straight stretch. And both parents appreciated that Tercels had a reputation for reliability, as I’d be driving it forty-five minutes each way to work.

Yeah, about that last part…

We joked that I got the only lemon Toyota made that model year. 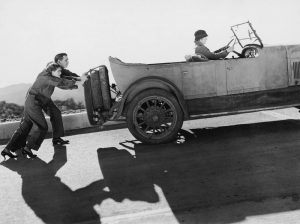 I’ve blocked out most of the drama and repairs, but I do remember the car dying for no apparent reason on the interstate—multiple times—with me drifting slowly toward the median and praying a tractor trailer wouldn’t crush me before I could get there.

It also gave us fits on the way to college my senior year.

Dad drove alongside me the five hundred miles to Massachusetts, as sort of my flag/escort car.

We miraculously made it as far as campus before my Tercel cut out completely. Some friendly, athletic-looking dudes helped push it the rest of the way to my house parking lot, where it sat under a snow bank until I graduated in the spring!

It seemed appropriate to pass this vehicle on to Sydney as she embarked on the next phase of her life in the prequel short story, End of the Road.

The story takes place approximately a decade before the first book in the Sydney Brennan PI Mysteries, Back to Lazarus, and shows the first step in Syd becoming an investigator.

Haven’t read Syd’s origin story yet? Just sign up for my newsletter and you’ll get it for free… 😉