I’m thrilled to share that Founder, Book Two of the Appalachian Dead Hollow Trilogy is alive—mwah-ha-hah!

It is a crime thriller with a touch of the supernatural, so I figured mwah-ha-hah! fits.

You can read a Preview and find purchase links here.

Remember, this is a true trilogy, not just a series, so do not read Book Two without first reading Book One, Prodigal. Which seems like a perfect segue…

I haven’t done any Magpie Moments posts in a while (bits about real-life moments I snatched up and tucked into my fiction), and I thought this might be a good time for a light and fluffy one.

Adam disentangled his arm from the blankets and reached for JJ’s hand. “What’s your daughter’s favorite ice cream?”

“You mean, Charlie Brown?” Adam asked. That’s what the flavor had been called at the local High’s convenience store when they were kids, and it had been Adam’s favorite. “Smart kid.” 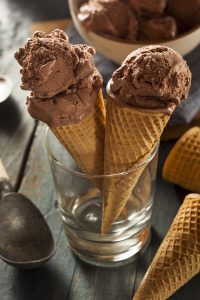 Long-time readers know that my Magpie Moments are often food-related and won’t be surprised to learn I gave the main character in Dead Hollow, Adam Rutledge, as well as JJ’s daughter, my own childhood favorite ice cream flavor.

For the record, my current favorite is probably Ben & Jerry’s Chubby Hubby, which is really just a fancier version of Charlie Brown for adults. However, it’s hard to find here, so I had to settle for Peanut Butter World last night to celebrate Founder’s release. 😉

Not only was the ice cream flavor actually called Charlie Brown, but—as one of you noted in a review of Prodigal—High’s was also the actual name of the ice cream store.

It didn’t happen every week, but way back in elementary school on very special Fridays, I’d find myself staring through that shielded case with its little signs identifying the heavenly tubs contained therein. We wandered from end to end—usually my cousin was with me, but occasionally a school friend—agonizing over our choices (maybe rainbow sherbet this time?) while my mother waited.

Fairly patiently, too, considering I always got Charlie Brown. I think my cousin did, too. 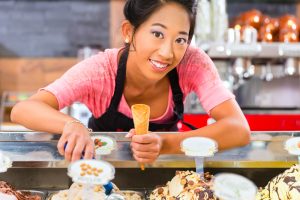 Over the years, in our small town we saw High’s transition from being an ice cream store to a convenience store that still had some ice cream, until it was finally bought out completely.

For anyone else feeling nostalgic, especially those who grew up in the Mid-Atlantic States, I stumbled across this article about David Norton, the High’s Ice Cream Tastemaster for thirty-seven years. No wonder it tasted so good—they used local milk from around Harrisonburg, Virginia, about sixty miles from where I grew up. And apparently I wasn’t alone in my peanut butter proclivity. Among his many popular flavors, the first one the article mentions is “Charlie Brown, a chocolate ice cream with veins of peanut butter.”

Mmm… have I gotten you in the mood to start your weekend right? Or you could just celebrate my book release with me. 😜