So, now that I’ve sent a draft of the latest Sydney Brennan novel, Braving the Boneyard, off to my editor, what have I been up to over the past week? All Mai Tais and pool boys? Not exactly. (Although I did track down the Mad TV Pool Boy Dance for your viewing pleasure.)

I mentioned in the last post (Resolve to be Resolute, Not to Aspire) that I’m working on my writing space, and I have to say: chair mats are beyond me. The sizing seems completely arbitrary. And how does having chunks cut of the corners mean a chair mat has a lip? (No, honey, I didn’t start on the German chocolate cake without you—it came that way; it has a lip.) But I did finally get a mat so I can sit guilt-free in my good old yoga ball chair again, and boy, do my neck and back (and head) feel the difference! The mat is on the smallish side, but I move so little in the yoga ball chair (more movement = greater likelihood of a dire gravity event) that I only occasionally bump off the edge to the floor. And as my husband pointed out, it’s not like I can do more damage than the dogs. Fred, the largest of the three, already spins in place so often I expect him to say, “Meep, meep!” (Especially since he never barks, except when he’s dreaming; apparently, it’s a Rhodesian Ridgeback thing.)

The rest of my time has been spent catching up on at least some of the things I’ve neglected lately: updating affiliate programs, cleaning up links and other website issues, working on a (gurgle, gurgle) promotion schedule… (The thought of marketing always makes it hard for me to breathe.) If you’re not a religious blog follower, I’ve added a Pinterest board with links to a good chunk of my blog posts. That way, you can scroll through and see what strikes your fancy when you’ve got a few minutes to kill before the boss/spouse/five-year old makes his or her rounds. Today, I even started the exciting task of looking through stock photos for the Boneyard cover. (I send my cover designer some ideas, but then she waves her magic search engine wand and always finds something I missed that’s totally perfect.)

Meanwhile, I’ve been contemplating ideas for my next book. As I mentioned before, I’ll be running a survey this month for you, loyal readers, to help me pick the next Sydney Brennan (short) story. But I’m also toying with some non-Sydney projects that could be a good creative outlet and help me come back—refreshed—for the next full-length Sydney novel. I love Sydney, and I don’t want to burn out before I’ve told all of the stories about her that are rolling around in my head. 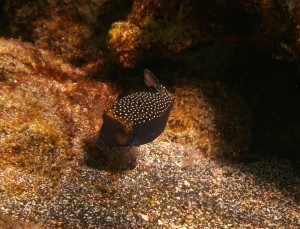 To that end (of not burning out), I started today, not with blog post writing, but with a quick snorkel. Except I couldn’t let go of the blog post thing, so I thought, I know! I’ll take some pictures, and I can post those on the blog and give those poor souls stuck in January winter a little hope that life will continue. (Or make them hate me, but I was hoping for the former.) Yeah, few flaws in that plan. First, I had to track down my underwater camera, and its charging cord (since I hadn’t used it in… mumble, mumble… a very long time). I couldn’t find any desiccant tubes, so I stuck the one that was still in the housing in our oven while I got ready. (Our propane-powered oven is also the home for our most treasured spices, and the occasional gecko.) I finished topping up the camera’s charge on the half hour or so drive to the ocean, where I encountered another flaw. My default snorkel spot (Richardson Beach Park) is a lousy place for taking pictures. There’s too much freshwater for photographic-quality visibility. And it was low tide with a little bit of leftover swell slop, which kept me out of my favorite decent visibility spot.

I took my camera in the water anyway, only to discover holy crap, am I out of shape! There was a gorgeous little male boxfish just begging me to take his picture, but between the shallow, surging sloppiness and my wimpy lungs, I’m afraid I could not do him justice. I am including a surreal view of Mauna Kea from the water. Yes, everything looks rosier when you’re in the ocean. Actually, I just couldn’t see my camera screen well enough to switch shooting modes to air-breather. The second photo is what it looked like from land (via my phone). Of course, I’m sure to many of you temperate folks, that still looks pretty darn rosy. 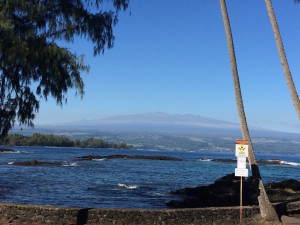 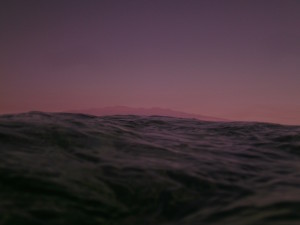