If you’re reading this as it comes out, you may have noticed that today is Monday, not Friday. Or you may still be hungover from New Year’s and not even know it’s 2016. Let me type that again to help me remember—it’s 2016. In other words, shh, don’t tell anybody… the blog is late. (Poor modifier—is there any context in which being late is a good thing?) 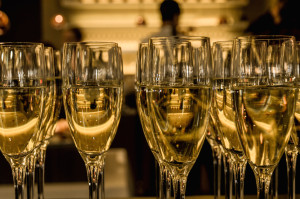 That’s okay—you’re my peeps. I know you’ll forgive me. Especially if you just woke up and think it’s still 2015. And especially because it means I got the fifth Sydney Brennan mystery to my developmental editor on deadline. Woo hoo! Yes, I’m the kind of dork that was working on my manuscript on New Year’s Eve. The working title is Braving the Boneyard. More details in upcoming posts, including the cover reveal in early February. (Unless you’ve subscribed to my Newsletter; then you’ll see it at the end of this month. So there.)

Among our holiday email chatter, my editor asked me if I’m a resolutions person. I had to think about it. This cartoon captures my attitude toward New Year’s resolutions pretty well. I appreciate the idea of having a time for reflection and evaluation (which is different from self-obsession), but I feel like the idea of having a resolution becomes more important than the substance of the resolution, which doesn’t bode well for accomplishing it. And really, if we’re not healthy, should we need the impetus of the New Year to nudge us toward failing to lose weight? (If you’ve never read it, you should check out Anne Lamott’s Facebook Post on Not Dieting. Of course, I could read the woman’s grocery list and be happy. Not that I’ve ever gone dumpster diving to do that.)

I may not be a New Year’s resolution person, but I do make resolutions all the time, usually after finishing a project, and usually about achieving more balance in my life. (Yep, the same ones over and over, so obviously I’m not very successful at them either.) My little Scrivener dictionary (not to be confused with my eight-pound hardcover American Heritage I’m too lazy to lift at the moment) defines a resolution as “a firm decision to do or not to do something.” It’s also “the action of solving a problem, dispute, or contentious matter,” as well as in “chiefly Chemistry the process of reducing or separating something into its components,” and “the smallest interval measurable by a scientific (especially optical) instrument; the resolving power.” I like to combine all of these ideas and think of a Resolution as a the culmination of a process. Take a problem, examine it closely, come up with a solution and put it into practice.

That’s a lot going on for one word, and it explains why resolutions are so hard to keep. It’s not just accomplishing one thing; it’s succeeding at all four steps. For example, can’t keep up with piles of paperwork? Maybe we fail not because (in Puritan-speak) we lack the moral fortitude to follow through, but because we’re misidentifying the problem. We don’t need a better filing system; we need to learn to let things go, to stop holding on to the daily accumulation of papers (and everything else) that clutter our lives but somehow give us a momentary illusion of security. Or maybe there’s no inner turmoil at all, and we just need to put the filing cabinet in a spot that doesn’t require doing a high level yoga pose to put our folders away. I suspect that for each of us, certain steps are naturally strengths or weaknesses, but if we don’t address every one, a Resolution becomes nothing but more than an Aspiration, “a hope or ambition of achieving something.”

Toward that end, my husband and I spent the weekend wrapping up some house projects and moving furniture, trying to improve our overall living space. Having just finished a rough draft, I am resolved not to let writing transform me into a hunched, twisted (and ultimately less productive) Tolkien character. (Unfortunately, my bad desk and chair have never made me into one of the snotty but beautiful elves.) We changed out my desk, and for the first time my writing books are within reach. Later today, I’m off to our resident office supply superstore (even though Office Santa already brought my favorite writing tools—Post-its and flags) to support the economy and declutter my writing table. This I can do. A 2016 production schedule, meh, that’s probably more of an Aspiration than a Resolution, even with my handy dandy planner. 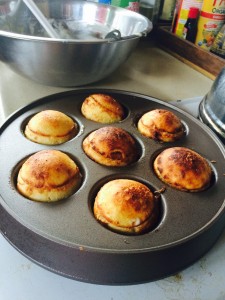 By the way, another of our household Resolutions: make more ebelskivers. To that end, here’s the first batch of the year, filled with apple butter and fig jam. Yum! But with four eggs, two cups of milk, and a crap-ton of butter (for 40+ pastries), the Danish pancakes are definitely not on the menu for Vegan Day.