If you subscribe to my newsletter, you’ll know I’m very excited about our late Valentine’s outing this week. First of all, outing! That doesn’t happen much here on the east side of the Big Island, unless you want to sneak out for an illegal lava viewing. (Yes, there is such a thing.) Second, we’re seeing David Sedaris. Happy dance! (I’m still thinking someone is diverting his plane without his knowledge, and he’ll be halfway through the show before he realizes he’s not in Honolulu or Tokyo.) If you’re not familiar with David Sedaris, why aren’t you? I mean, let me give you an introduction. 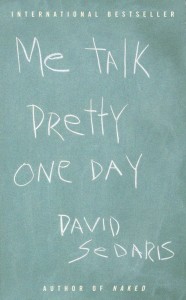 David Sedaris writes humorous essays. The first book I read of his was Me Talk Pretty One Day (a good chunk is devoted to learning to speak French in Paris) but I initially heard his work on NPR, where they play a clip from his Santaland Diaries every year at Christmas. (Listen to it, and you’ll never look at mall elves the same way again.) The strength of Sedaris’s work is that it has the depth of real life, not just the single note of a simple joke. For example, in “Repeat After Me,” (on his Carnegie Hall album and in Dress Your Family in Denim and Corduroy), the same story that makes you laugh out loud also makes you uncomfortable when you recognize some of Sedaris’s lesser character qualities in yourself, then feel moved as you hear him ask someone for forgiveness in a way that is uniquely meaningful. 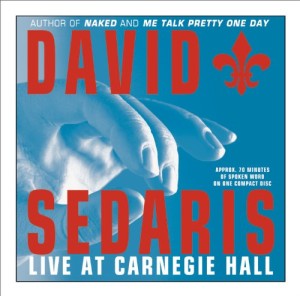 Of course, not everyone finds the same things funny, and it’s not really the kind of thing you can predict until you know someone well. Ever have that moment when you realize, not only does your companion not share your sense of humor, but he or she may never look at you quite the same way again because of it? Once back in the mists of time when I was still a lawyer type, I played driver and general right-hand woman for a veteran investigator on a two-week investigative trip. We were powering through the end of the twelve-hour drive back home to Tallahassee from Norfolk, Virginia. It was dark, and we were exhausted. I remembered I’d brought Sedaris’s Live at Carnegie Hall CD with me and popped it in. (Told you it was the mists of time; at least it wasn’t a cassette.)

The investigator and I were just finishing an intense couple of weeks together, and our personalities had meshed well, but we’d barely met prior to that trip. As the track “Six to Eight Black Men” approached, it occurred to me that I may have made a humor miscalculation. In that stellar story of cultural relativism, Sedaris relates that, when traveling internationally, one of the things he asks cab drivers about is the country’s Christmas traditions. (Others include their gun laws, and what their roosters say.) In Holland, he was told that Saint Nicholas is accompanied six to eight black men that act as helpers.

The six to eight black men were characterized as personal slaves until the mid-fifties, when the political climate changed and it was decided that instead of being slaves they were just good friends. I think history has proven that something usually comes between slavery and friendship, a period of time marked not by cookies and quiet times beside the fire but by bloodshed and mutual hostility.

Sedaris marvels that, over hundreds of years, nobody has managed to get an accurate head count, and wonders what would happen in the US if we were told to expect 6-8 unidentified black men sneaking into our house at night (albeit Christmas Eve). I watched the interstate exit signs and waited anxiously for that indescribably awkward feeling that the man sitting next to me—who was black—did not find the story as funny as I did.

It never came. Together we laughed to the point of exhausted tears (which, incidentally, I don’t recommend while driving). When we reached his driveway, he sat in the car with me until the CD finished. Did I mention we’d been on the road forever? I kept expecting his wife to come out and check on him. Now that, ladies and gentlemen, is the power of story.