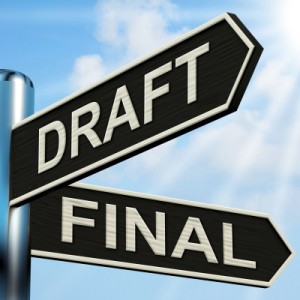 I’ve been getting The Perils of Panacea back from my copy editor in chunks this week, so that’s exciting. My husband asked, “Does she find a lot of stuff?” She’s reviewing a post-beta read final draft, which I’d like to think is reasonably clean. The answer is still, “Yes, she finds a crap-ton of stuff.” Okay, that might be exaggerating a little, but it’s amazing how many things slipped past me over the course of 100K+ words. Some were typos or awkward phrasing that I’d read too many times to notice. I’d introduced mistakes making changes after the beta reads. And I’d done things consistently wrong. I now have a sticky note (possibly a Post-It) to remind me of the proper formatting for an ellipsis, and another to generally spell out numbers less than 101. I also have a fondness for rendering sounds phonetically (be forewarned, should we ever meet, that I occasionally do the speaking version of this, too—a little like a Batman episode). Those need to be italicized (for example, the chuk that one’s throat makes trying not to breath underwater).

I thought I’d share a few of the other random things I’ve learned from my copy editor this week, specifically in the realm of spelling. I’m a pretty decent speller, but I was thwarted by several compound words and whether they are hyphenated, separated, or just stuck together. I love the wily hyphen example Strunk & White give of the merger of two Chattanooga newspapers—the News and the Free Press. The unfortunate result was the Chattanooga News-Free Press. (I don’t think that newspaper is exclusive to Chattanooga anymore.) None of mine are that delicious, but here are a few of my own words gone astray:

[“Draft Final Signpost Means Writing Rewriting And Editing” by Stuart Miles and “Bread In Basket” by Witthaya Phonsawat from freedigitalphotos.net]