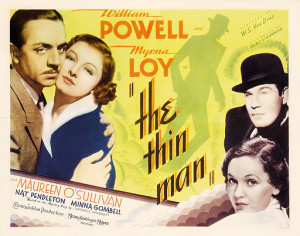 I’m constantly realizing things about my viewing and reading habits while writing this series. This week’s revelation: the Stories I Love are all about character. That makes sense. You can definitely enjoy a story that’s plot-driven, and there are some plot-driven stories I’d like to watch or read again, just to see how they made it work, sort of like a mechanic looking under the hood of a fast car. But how many of those stories do you return to time after time after time? The Thin Man movies stay near the top of our DVD rotation not because of the plot (which is thin at best) but because of the characters—I just love spending time with Nick and Nora Charles.

Retired private investigator Nick Charles has returned to New York City after a several-year-absence with his west coast wife Nora. When eccentric inventor (and former client) Clyde Wynant disappears and is suspected of murder, it seems the perfect case for Nick. He tells Nora he’s not interested, that “I’m too busy trying to see that you don’t lose any of that money I married you for.” But no one—from law enforcement, to criminals he’d previously apprehended but now pals around with, to criminals involved in the caper— is willing to believe that Nick has given up detecting for good. Of course, if he had, that would make for a boring story (and no sequels). A gunmen showing up in the Charles’ bedroom in the middle of the night finally convinces Nick that he’s involved in the case, whether he likes it or not.

The Thin Man is technically a murder mystery, but the murder investigation is really secondary, an excuse for William Powell and Myrna Loy to deliver witty dialogue while in various states of inebriation. Here’s an example, from the day after the above gunman scene:

Nick: I’m a hero. I was shot twice in the Tribune.

Nora: I read where you were shot five times in the tabloids.

Nick: It’s not true. He didn’t come anywhere near my tabloids.

Powell and Loy also have amazing physical comedic presence, weaving and slurring, flicking each other and making faces, and even indulging in a pratfall or two. With their chemistry, an all-star cast, and one of the most charismatic dogs to grace the screen (our dear-departed but slightly psycho Jack Russell terrier mix was named after Asta), it’s easy to see why Roger Ebert included The Thin Man in his list of the Best Movies of All Time (read his review here). 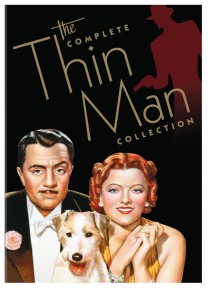 The Thin Man movies (ultimately there were six, and yes, we own the complete collection–you wanna make something of it?) were inspired by Dashiell Hammett’s novel, The Thin Man, published in 1934. The movie was shot in two weeks’ time and came out the same year. I’m embarrassed to admit I’d never read the novel until recently. A prologue was added for the movie, and the book has a slightly more complicated plot, but the dialogue has a similar feel in both versions. Some lines in the movie were taken directly from Hammett’s novel. (Of course, having practically memorized the movie, I heard Powell and Loy’s voices while reading the novel.)

Nick: Only you, darling, lanky brunettes with wicked jaws.

This is true for the supporting characters as well. Marion’s complaint to Nunheim as she’s leaving his apartment is verbatim from the book:

Hammett’s novel is much darker than the movie it inspired. Dorothy Wynant, daughter of the absent inventor, is engaged to a very normal, straight-laced young man in the movie. In the novel, she has an affair with a married man and spends many drunken nights at the Charles’ apartment. Her mother Mimi (a character none too stable in either version) slaps Dorothy in the movie, but beats her daughter viciously in the novel, leaving visible bruises and welts. The dialogue and some of the characters’ actions that seem histrionic in the movie make more sense in the darker context of the novel. For example, much of the gunman Morelli’s dialogue in the Charles’ bedroom makes it to the movie intact, as does his itchy trigger finger. These things, and his profuse sweating, seem almost cheesy onscreen, but inevitable when you learn in the book that he’s a drug addict. Almost everyone in the movie is an alcoholic, swilling booze like most people breathe air, but I don’t recall any references to other drug use. Similarly, the movie characters talk about being “crazy,” but you rarely see any behavior that goes beyond what the British might call eccentric. The entire Wynant family is seriously mentally disturbed in Hammett’s novel.

It’s not surprising that the movie would have a lighter touch with Hammett’s material. In addition to dodging the censors, the studio would have been targeting an audience in need of comedy, of a story where the protagonist may dodge a bullet or two but neither he nor his martini supply is ever in any real danger. As Roger Ebert says in his review:

For audiences in the middle of the Depression, “The Thin Man,” like the Astaire and Rogers musicals it visually resembles, was pure escapism: Beautiful people in expensive surroundings make small talk all the day long, without a care in the world, and even murder is only an amusing diversion.

Over eighty years later, the movie still entertains, so if you’re in the mood for a little escapism, you could do worse than Nick and Nora.