Good news—Braving the Boneyard is available for preorder at Kobo! The ebook will be popping up everywhere else (Amazon, iBooks, Nook, etc.) on release day: May 19, 2016. Kobo’s process was so easy, and much more flexible about how far out you could post, so I figured… why not? Next book, I’ll try to hit them all.

The paperback, on the other hand, has been my cross. My albatross (except I really like seabirds).

Last week, I thought I’d finished the template for my cover designer, but there were some pdf issues, and I had to start over.

Then there were even more issues, including a moment out of a Stephen King novel. (Not one of the recent ones with a touch of the supernatural; one of the older, really crazy ones.)

My file looked possessed; all of the headers and footers were inverted. Yes, upside down devil headers. Here’s a shot of what I dubbed Bizarro Boneyard. 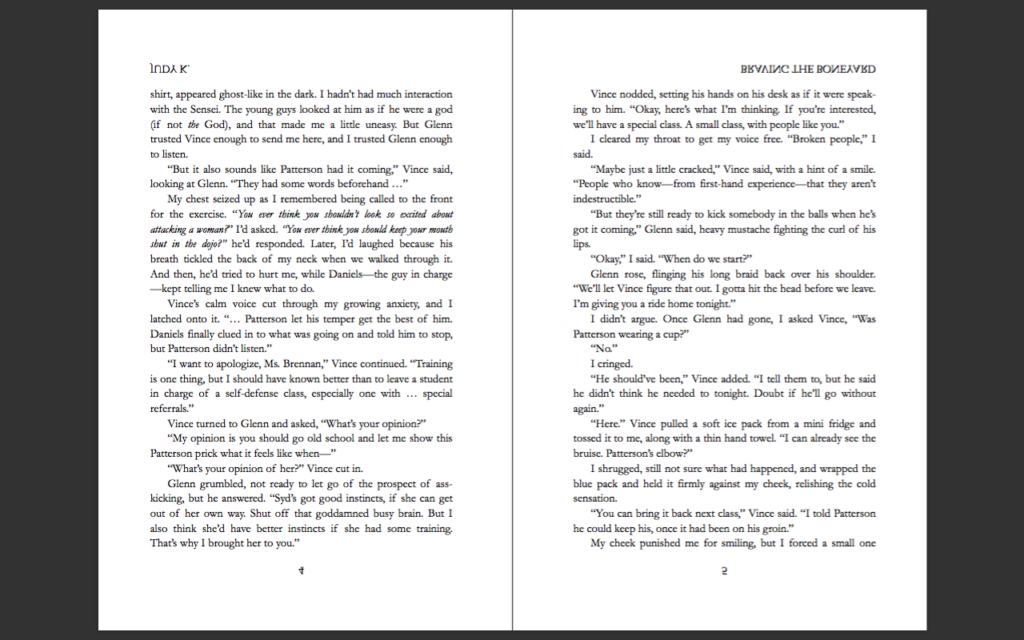 (I recently posted the first two chapters of Boneyard—including these pages—as a preview, so don’t hurt your eyes trying to read them!)

After some digging on The Internets, it appeared to be an El Capitan problem (I guess not enough oxygen gets to the sensors at that elevation). And the fix required downloading a Scrivener update. I did some quick calculations about the possible size of the update, the amount of internet I’d used so far this month, the meager week-and-a-half that had elapsed in the internet billing cycle … and that’s when I walked away from the computer and made Two-Layer Brownies. 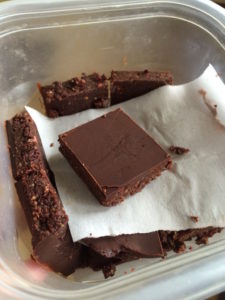 Mmm, brownies … Okay, I just wanted to make sure you were with me before mentioning they’re raw brownies. (Except mine may not technically be raw because I cheat and melt chocolate chips with coconut oil for the topping.)

Like the Blueberry Buzz smoothie, trust me on this. (Or rather, trust Angela Liddon at the fantastic site Oh She Glows; I always do.) They live in the freezer when you’re done (if you’re wise, you’ll hide them behind the peas), and they taste best when they’ve had a night or two to harden. Which means right now, they’re perfect. And about fifteen feet away.

The next day, still riding my chocolate high (but not for long), it was back to troubleshooting, an endeavor not helped by the total wingnut sitting across from me at Starbucks while I used their wifi. He was talking to himself, laughing like a maniac from—you guessed it, an old Stephen King novel—and generally sweating and scratching while he tweaked.

It’s funny how hard it was to control my Sydney impulses to open my mouth while working on her book. But I kept telling myself: it’s a lot easier to write your character out of trouble than it is to extricate yourself from your own smarty-pants karma. (And also, if the dude got really crazy, to make sure I saved my laptop first.)

But thankfully the paperback is now on to the next phase (cover designer) and inching toward the home stretch.

As I compiled and uploaded and glazed my eyes with various files this week, a snippet of Secrets in Stockbridge caught my eye, a mini-Magpie Moment if you will, that seemed apropos enough to share today.

I may have sought chocolate solace, but nothing was so bad as to require Roger’s Macallan, or Sydney’s truly extreme measures…

“Of all this, I might have been mistress,” Bran said. I couldn’t help a smile. It was a Pride and Prejudice reference.

“You remembered,” I said.

“How could I forget? You watched it all the time.”

It’s true that I had worn out a VHS copy of the Colin Firth-Jennifer Ehle version before getting it on DVD. “I only watched it when I was having a shitty day.”

He walked over and held my face in his hands. “I’m sorry you had so many shitty days with me.”

Yes, my husband can attest that I wore out a VHS copy of the Colin Firth-Jennifer Ehle version before switching to DVD. (For the record, the quality seemed weirdly better on VHS.) I like Keira Knightly well enough, but Jennifer Ehle will forever be Elizabeth Bennet to me. And don’t even get me started on Colin Firth’s Darcy.

Unlike Sydney, I find that the adaptation resonates on both sides of the emotional spectrum—truly lousy days, and the ones where you’re treating yourself to a guilty pleasure.

Hmm … perhaps a post-launch indulgence? If, that is, I’ve managed to eat all the brownies.