A few nights ago, we were heading to bed when my husband said, “I like your laptop.” Yeah, seemed like a non sequitur to me, too. Then he added, “It’s like you smashed something in there, and all the ideas are squishing out.” Ahh… Not a total non sequitur after all. He’d just evicted the cat from our dog Fritz’s crate (Ninja loves Fritz’s new bed, and the pit bull is too much of a wuss to kick him out), and the crate is directly behind my desk where rests my frilly laptop. 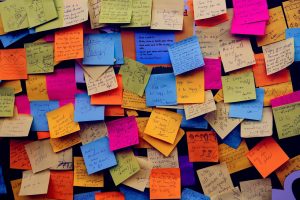 I’ve previously confessed my love of/unhealthy addiction to the Post-Its that ring my laptop and cover my desk and a good portion of my bulletin board (Peeking at Process). I try to purge them when I’ve wrapped up a book, but apparently I didn’t do a very good job after publishing Founder. Part of the difficulty is that it was the second book in the trilogy, so some Post-Its are reminders about the next book. Others are—well, they’re all over the place. Here are some I decided I could share without spoilers and without prompting you to google “how to commit someone in the state of Hawaii.”

This is but a small selection of my laptop’s bulging brains. I removed a few while writing this post, but there are still nineteen Post-Its on my laptop (and maybe twice that on the surface of my desk). If you think that’s bad, maybe someday I’ll share a screenshot of the bloody red comments/notes sidebar in one of my manuscripts. 😉