Hoo, boy. This post is one that’s been a long time coming, and almost didn’t happen this week, either.

But when my husband shared that a friend is currently watching this Story I Love as comfort viewing, I knew I had to suck it up. Who knows? If you’re a stranger to Harlan County, this may be the comfort you need to get you through until your next delivery of ice cream and/or alcohol.

(Future blog readers, assuming there are any: we’re currently seven months or so into the Covid Times.)

Harlan County, Kentucky, is the setting for the crime drama Justified, with six glorious seasons of Stories I Love.

Fine, they’re not all universally glorious, but even the oft-maligned Season 5 has its moments.

Global climate change must be hitting Harlan County hard because it never snows there, and the Appalachian hills tend toward brown rather than bluegrass.

Yes, I am being a smart-ass. 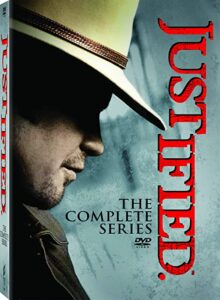 Although set in Kentucky, Justified is filmed almost entirely in California, which drove this West Virginia girl just a little bit crazy. As did the fact that characters drive between Lexington and Harlan as if the latter is a suburb of the capital. In reality, it’s more like three hours each way, but that’s the kind of thing that always get lost in Hollywood portrayals of rural life. Along with subtleties of southern and Appalachian accents. Ouch!

And yet, the show’s creators still managed to capture something that feels both real and magical.

Justified revolves around Deputy U.S. Marshall Raylan Givens, a role Timothy Olyphant seems to have been born to play. Olyphant nails Stetson-wearing Raylan Givens from the very first scene, which happens to be the very first (but not nearly the last) quick draw. This Miami rooftop encounter results in Raylan being transferred from Florida back to his old Kentucky stomping grounds, the last place on Earth he wants to be.

The showdown also gives the show its name and embodies its raison d’être: was the shooting “justified”? And are all of the subsequent shootings and acts of violence and betrayal by Raylan and the rest of the Harlan County clan justified?

In case the quick draw wasn’t a tip-off, Justified has a sensibility that falls somewhere between modern western and film noir, leavened with wry humor (and rye whiskey, though more often it’s bourbon). It’s grounded by the occasional authentic Appalachian detail that makes me seize the remote and babble at my husband, That! That was exactly right! Remember how my cousin… And discussions of regional dialect and/or or ill-advised mountain mayhem ensue. 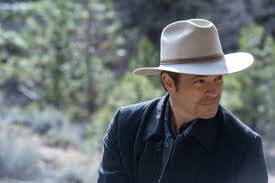 Leonard was closely involved with the show, and its creator and writers regularly wore WWED wristband reminders: What Would Elmore Do? With that guiding principle, of course the show has style. Raylan is beyond cool, in every sense of the word. (Which isn’t to say he can’t also be an ass—isn’t that a requirement of cool?)

Marshall Givens has such complete confidence in his ability to out-draw anyone and everyone, he doesn’t need to prove himself. But, in true Western fashion, others want to prove themselves against him. Some of the show’s most memorable scenes walk a razor’s edge of dark humor and fierce tension as Raylan calmly convinces men that drawing on him is not in their best interests.

Check out the Season 1 episode, The Fixer, for a classic example where Raylan avoids a draw with a man antsy to have one by casually explaining—and demonstrating—that a lot can go wrong in such a stand-off.

Justified’s dialogue is consistently delicious in an understated, Elmore Leonard kind of way. Some of it came directly from Leonard (he enjoyed the show so much, he wrote an additional Raylan Givens book and gave them free rein to mine it for screen gems). What didn’t is the product of writers doing their best to channel Leonard’s voice. Or some meta-hybrid of the two, like this exchange:

Raylan: Wonderful things can happen when you sow seeds of distrust in a garden of assholes.

Marshall Tim Gutterson: You just come up with that?

Raylan: I read it somewhere.

Marshall Tim Gutterson: Well, do me a favor and say it again slow so I can write it down.

Raylan could have read it somewhere, and so can you. In Elmore Leonard’s 1985 book, Glitz.

But the show’s Leonard-emulating style is more than just lipstick on a pig, as a Harlan resident might say. It’s a reflection of a finely drawn, gritty, gray world where words are nothing without the actions to back them up, and those actions have consequences. 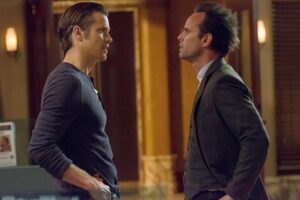 It’s hard to imagine Justified without Boyd Crowder, the outlaw who shares a history with Raylan—they dug coal together—and acts almost as Raylan’s mirror image. (Sometimes it’s difficult to tell which is the light side and which is the dark). In fact, Boyd Crowder was supposed to die in the pilot episode, but Walton Goggins portrayed the character so masterfully he was resurrected.

Subsequently Raylan’s and Boyd’s adversaries-or-reluctant-allies dance became the backbone of the show. Remember that magic I mentioned? A large part of it is the chemistry between Olyphant and Goggins. A simple conversation between plain-spoken Raylan and eloquent Boyd, who—as one baddie notes—uses forty words when four will do, can be mesmerizing.

Ava Crowder (married to Boyd’s brother until she… wasn’t anymore) is another pillar of the show, from the pilot until the series finale. I feel like the writers fumbled a little figuring out Ava in the first season, but she ultimately has the greatest character arc in the series, and actress Joelle Carter makes every bit of it believable.

A few members of the supporting cast feel consistently underwritten (solid performances, but not enough screen time), but there are some unforgettable guest stars and recurring characters. Among them, the fantastic Margo Martindale (I do love me some Sneaky Pete) won an Emmy for her Season 2 portrayal of Mags, marijuana matriarch of the Bennett crime family.

Then there are characters like can’t-win-for-losing Dewey Crowe; the ultimate survivor (with the most mesmerizing eyebrows) Wynn Duffy; Raylan’s take no guff, shotgun-toting Aunt Helen; and on and on. Patton Oswalt, as AMC Gremlin-driving Constable Bob Sweeney, might be my favorite. As Raylan says, “People underestimate Bob at their own peril.”

Justified rotates in and out streaming services, or if you have an awesome library system like we do in the middle of the Pacific, you can check it out there and find your own favorite character. Someone you wish you knew or are thankful you don’t, or maybe someone who resonates with your own memories.

Even if you weren’t, like Raylan and me, born and raised in the hills and hollers.

For the record, my own character Harlan Miller is not a nod to the show, having been written before I’d seen it, but it is a nice serendipity. If you like your Appalachian crime with a dash of the supernatural, check out Harlan in my Dead Hollow trilogy.