If you follow my shenanigans on Facebook [2022 UPDATE: I am no longer on FB!], you’ll know that I’ve discovered the joys of Amazon Prime TV, specifically their addictive adaptation of the Michael Connelly series, Bosch, featuring Titus Welliver. That is some good entertainment! But Season Three of Bosch doesn’t come out until April 21, 2017 (now not so far off), so what’s a binge-watching orphan to do?

This one got lucky and found a new favorite show: Sneaky Pete.

The show opens in prison with conman Marius (Giovanni Ribisi; yes, Phoebe’s brother) looking forward to his imminent release and getting away from his long-winded cellmate Pete. Marius is waxing euphoric about NY cheeseburgers in a last-minute phone call when his brother tells him, you can’t come back; it’s not safe.

Things have gotten complicated during the three years Marius was incarcerated, and they’re only going to get more so. With nowhere to go, Marius decides to take over his cellmate Pete’s identity, to show up on his grandparents’ doorstep and pretend to be their grandson. They haven’t seen Pete for twenty years, so how hard can it be?

As you can imagine, maintaining that deception alone is storytelling gold.

The first family dinner with all of the cousins is awkward, but realistically so. It struck me, watching the pilot again, that Marius gets by doing something counterintuitive. My inclination would be to pull back, to speak as little as possible, basically lying low to avoid screwing up. Instead Marius engages with the people around him, drawing them out to get the information he needs.

If he’s put on the spot—say when his immature cousin begs a performance of their favorite childhood putdown—he relies on his remarkable ability to read people, his understanding of human psychology. But even these skills can’t help Marius find out what unforgivable sin Pete’s mom committed when she took Pete away from the family twenty years ago, and you can’t help but think that’s going to come back and bite him in the okole. (That’s your Hawaiian pidgin’ word for the week.) 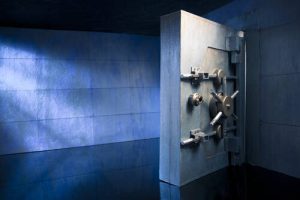 So conman Marius-turned-Pete has found a sweet deal, right, hanging with the grandparents and cousins in the ‘burbs? Well, not so much, because that would make a boring show.

Without giving too much away (the show certainly doesn’t), you quickly figure out that Marius has something up his sleeve in New York City (enter The Heist), which he has to orchestrate while being a credible Pete in Trumbull, Connecticut. Marius/Pete living two lives translates to twice the complications, not to mention the ever-present possibility of a catastrophic collision between the Marius and Pete worlds.

Pete’s family is supposed to be a means to an end, both helping Marius stay off the map and funding The Heist. Except it turns out Pete’s grandparents run a bail bonds business, not a stocks and bonds business as he’d thought. Plus, they’ve got their own onions-worth of layers of deception, albeit ones born from love rather than greed. And of course, in true heist fashion, when Marius ventures into New York to further his plans, who can tell which of his old colleagues can be trusted? Hopefully Marius.

I saw an early review that called the show “lighthearted” based on the first four episodes of a ten-episode season. There are definitely some funny moments in Sneaky Pete (guest star Debra Monk has a bit that gave me a flashback to her Nero Wolfe days), but personally I wouldn’t call it lighthearted or comedic. In fact, I’d say it gets more serious as the season progresses and the stakes get higher in both worlds. And unlike most heist movies, you don’t maintain the conviction in the back of your mind that it’ll all come out right in the end. This is a world with real consequences, where simply having George Clooney’s charming smile isn’t enough to get a character out of a tough spot.

The arc of Season One reflects one of Marius’s life lessons: When a liar gets caught in a lie, they don’t come clean. They build a bigger lie.

Everyone in this show is lying, either directly or by omission. (Shows that withhold too much information, trying for too much mystery—à la Lost—can be frustrating, but here the secrets feel true-to-life rather than contrived for the sake of plot.) As the lies get bigger, everyone’s available options get narrower.

I was thrilled to learn that I’m apparently not alone in my love of the show—Amazon green-lit Season Two of Sneaky Pete a mere week after releasing the full Season One.

How do you do Season Two of a heist TV show?

I’ll just note that they have such depth and are so varied and there are so damn many. Don’t panic; just let them wash over you (I gave up on names and stuck with faces) and I promise you won’t miss anything. Fine; you liked the characters. But I came here for the heist, you say, and the writers drag it out for a second season?! No, they don’t. Let me reassure you that the plots of Season One have a full, satisfying resolution. Right before the writers knock you between the eyes with a twist at the end worthy of the show’s name.

But now what am I supposed to watch until Season Two airs in 2018?