Everyone is familiar with the magic of comfort food. Over the weekend, my husband and I felt the need for comfort entertainment, which of course made me think of another installment of Stories I Love. This time, the Nero Wolfe edition. 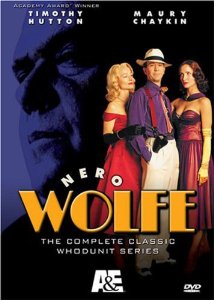 If you read my blog regularly, you’re probably not surprised by the choice. A while back I wrote a post about Book Chi, the idea that years of reader experiences can attach to the physical books you find in libraries and used book stores. The book that prompted this was a library copy of Rex Stout’s, Please Pass the Guilt.

If you’re a fan of mystery or detective fiction and you’ve never read Rex Stout’s Nero Wolfe novels, what are you waiting for? Go get one! They’re a quick read, and it’s like tapping into the the detective ur-mind, the place we all came from.

Rex Stout had a prolific career, and nearly 50 of his books featured the inimitable genius private detective Nero Wolfe and his right-hand man Archie Goodwin. (Not that Nero would describe Archie that way; a simple “satisfactory” is high praise coming from the brilliant behemoth.)

Nero Wolfe is a large, impeccably dressed eccentric who spends a good portion of every day in the plant rooms with his prized orchids, only to be disturbed in the most dire of emergencies. Lest he seem too much of a caricature, we are occasionally reminded that Nero is an immigrant with an intriguing past, someone whose devotion to literature and art and fine cuisine can perhaps be traced to the deprivations of his revolutionary youth.

Archie Goodwin is Nero’s man on the ground, responsible for gathering all of the facts (or all of the suspects) so the fat man can deduce a solution. Archie (as sociable as Nero is reclusive) enjoys having a good time, whether it’s playing poker with the guys or dancing with the ladies. In fact, Nero sometimes asks Archie to explain women and their motivations, as they remain a mystery even to his vast intellect. 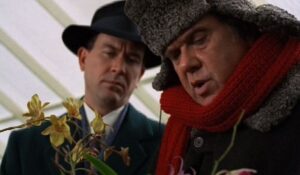 My first exposure to Nero Wolfe was through reading the books, but I also love the A & E adaptation. It stars Maury Chaykin as Wolfe and Timothy Hutton as Goodwin, and they’re so good at inhabiting the roles that I hear their voices when I read the novels.

Aside from the regulars (Nero’s employees and a few LEOs), the rest of the roles are filled by a stellar ensemble cast. That seems to help the series maintain a sense of energy more like theatre than television over the course of 20 episodes. I’d recommend sampling both the series and the novels. (Be forewarned though—on that long river retailer, it’s showing a collector’s price now. )

The Nero Wolfe novels are written in first person—Archie’s voice. I love the conversational style, and his voice is so distinctive that I know I’m in a time and place that doesn’t exist anymore. But approximately 40-80 years later (depending on the work), the stories are now period pieces. No matter how well Rex Stout describes everything, I just don’t have the cultural context for a type of hat or model of car. With a well-done adaptation, I don’t have to—they fill in the blanks for me.

The episodes probably cover a couple of decades, but the costumes always look authentic (at least to someone like me who doesn’t know any better). I can almost hear the swish and crackle of the women’s gowns. The sets are amazing as well, combining vivid colors with relatively dim lighting to great effect. The episode we watched recently had an opulent penthouse love nest, complete with pin-ups and lotions and liqueurs and golden tasseled ropes strategically hung around the huge bed, that must have been a blast (or maybe a just a rewarding pain in the butt) to furnish. 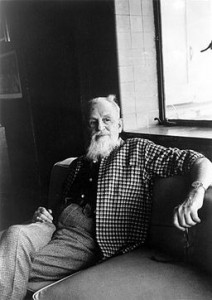 Rex Stout does a masterful job of establishing these characters and maintaining consistency over a long span of stories. Not only does this give you the warm and fuzzy (baked mac and cheese) feeling of familiarity with them, it also means that when there’s a deviation, you understand as a reader or viewer that IT’S A BIG DEAL. When Nero Wolfe misses a meal, or when he leaves his brownstone, suddenly anything could happen.

Our favorite episode has a hilarious scene with Nero stumbling through snowy woods while Archie and Saul Panzer try not to laugh. Every time we watch it, I wonder if Maury Chaykin improvised some of that; Hutton and Conrad Dunn seem to be genuinely losing it.

As much as I like the series, they did only film 20 episodes. That alone is reason enough to read the books as well—dozens more opportunities to spend time with Nero and Archie. Wikipedia features a great quote from PG Wodehouse about Rex Stout that pretty much says it all:

His narrative and dialogue could not be improved, and he passes the supreme test of being rereadable. I don’t know how many times I have reread the Nero Wolfe stories, but plenty. I know exactly what is coming and how it is all going to end, but it doesn’t matter. That’s writing. —P.G. Wodehouse