Much writing advice can be boiled down to, “Write every day.”

There may or may not be word counts attached, but in essence it’s that simple. Create a little something every day, and you’ll see multiple benefits. Keep at it, and with a page a day you’ve got the rough draft of a novel in a year.

You also make changes in your mind, training yourself to produce words by habit the way you would learn a fancy toss-the-ball-in-the-air tennis serve day by day. (If the preponderance of hyphens make you think said tossed ball would likely land back on my forehead, you’re right.)

You get better at writing with repetition, and maybe it even gets a little easier. You convince yourself that writing isn’t just a hobby. You’re not just crocheting pot trivets for relatives, you’re making afghans that get exhibited in folk art exhibitions and go for ridiculous amounts of money at auction.

I agree with this school of thought, and I see the difference in my writing and in my life when I adhere to that simple principle, write every day. Until I don’t. That’s when I run into problems. 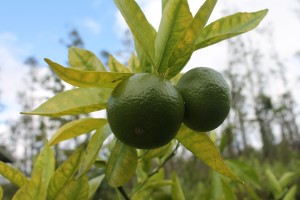 There are days when, for whatever reasons—physical, emotional, internal, external—writing is like getting fresh-squeezed juice from the tangerine tree in your yard.

If you’re lucky, the tree you planted hangs on long enough to produce some kind of scrawny fruit, despite your lack of soil and nutrients and make-things-grow magic.

You wait for the itty bitty tangerine nugget to get bigger and bigger and turn some color that approximates what you see in the supermarket. Then you pick the tangerine, take it in the kitchen and get a little bowl—no, a bigger bowl than that! This is a whole tangerine.

But you slice the fruit in half on the cutting board, and nothing oozes out. That’s ok, you’ve got one of those ridge things, so you squish your half a tangerine around and around until you get carpal tunnel twinges. Hmm, maybe all the juice is in the other half. [Repeat process.]

And eventually there’s a tablespoon and a half of slightly colored liquid in your vast bowl, along with a couple of seeds.

Sometimes that little bit of juice that took so much effort tastes just like the juice from the supermarket, and sometimes there’s a hint of—um, is that sulfur? But hey, juice. Words. Paragraphs.

There are also days, or in this case, multiples of days, when nothing new is written. Oh sure, you proofed and edited, you formatted files, but you didn’t write.

And what happens when you only have one thing you have to do, and you don’t make it happen?

If you’re anything like me, and I doubt I’m alone in this, the floggings begin.

The storytelling that brings so much joy, or at least compulsion, becomes a Bizarro version of itself. We weave elaborate tales of our shortcomings, get wrapped up in cycles of justification and punishment. But I think every time we do this, a children’s book dies. One about puppies that cure cancer by farting rainbows. (Which just causes another guilt cycle, and the loss of what could have been the next Harry Potter.)

And all this—the guilting, the book-killing—it’s just not worth it. To paraphrase/plagiarize the Buddha (and prove that I’m not totally zoning out when my Buddhist husband talks to me), I’m trying to stop being attached to my failures and shortcomings. It doesn’t accomplish anything positive and, really, I’m not that important.

This may just be the after-effects of Hurricane Iselle, of seeing the silhouettes of ohia trees bending to the ground as a freight train of wind pulled on the metal roof, then trying to reconcile the gaps in our skyline afterwards with the silhouettes from the night before.

Or the appreciation for being one of the only people in the neighborhood (thanks to being off the grid) that doesn’t have a fridge full of spoiling food and can plug in my computer and turn on the internet (after the able-bodied husband reattached the satellite dish).

Want to hear something crazy? We lost several trees on our property, and there were at least half a dozen lying across the road just on our block (thank you, neighbors with chainsaws). But our first lilikoi fruits—that is, from the first lilikoi vine we intentionally planted here, sprouted from fruit someone gave us—literally hung in there and are still ripening on the vine.

So I hope this is a feeling I’ll remember from time to time. 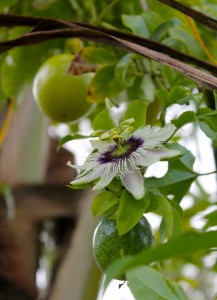 Okay then, if you’re still reading, this is just me talking to me. Unless that makes you want to Baker Act me. (That’s the law in Florida that enables someone to have someone else committed involuntarily. But I’m in Hawaii, so I should be safe.)

And unless what I’m saying to myself resonates for you, too…

So you didn’t write yesterday. Or last week. Or last year. Whatever. So what? Get over yourself.