I’m just starting to feel my way around Goodreads Author Land. They have an “Ask the Author” section where readers can submit specific questions to authors, but there’s also a rotation of commonly asked questions. One of these caught  my eye and my imagination more than I would have expected, so I thought I would share it here as well…

Where did you get the idea for your most recent book?

The seeds of Back to Lazarus were planted so long ago that I’d forgotten them, until I read this question and started digging in my brain and my notebooks. (My first hand-written note about Isaac and Vanda and Noel was from October 4, 2003.)

The story didn’t actually begin with my private investigator protagonist at all, but with the decades-old murder she’s hired to investigate. It began with a case I was working on as an attorney at the time, and with the idea of Isaac Thomas.

**SPOILER ALERT** Back when I was still working on death penalty appeals, there were a few cases that confused me, but one in particular really stuck. For most cases, I had a story in my mind of what had happened, but I couldn’t get this one to make sense. It just didn’t feel right, like I was missing some pieces of the puzzle.

The client had confessed at the time of the murder, but I don’t think he really knew what happened either. That’s where the jump-off to fiction happened. I wondered, why would someone lie about killing someone else?

And Isaac Thomas was born. 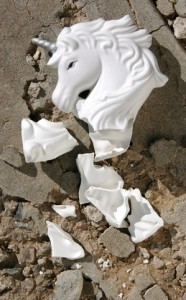 I started with an image of the crime scene, and the first thing I wrote was Isaac finding his wife’s body. This was written as a prologue early on, one where it isn’t entirely clear whether Isaac killed his wife or not.

Eventually Sydney was born, too, and the prologue didn’t make sense within the structure of a first person private investigator novel. It took me a long time to let go of Isaac, though, and let the novel belong to Sydney.

Isaac was the heart of the story, the character I cared most about, and it felt a little bit like a betrayal to not include any of the scenes I’d written about him. (I’d also written a section that covers the night he struck Vanda, from the time he arrives home to find Noel alone to the time things get ugly at Jimmy’s.)

In the end, I had to have at least a nod to what I knew had happened, even if I was the only one who understood it. There is a moment in Back to Lazarus where Sydney wakes up from a dream with the image of a broken unicorn, an image she had seen in the crime scene photos.

You can read Isaac’s prologue (unedited and never used) in the Extras Section of Books.