Okay, so I’m deviating a little bit from my formula here.

I wrote about Broadchurch as a Story I Love a while back. The Fall is another amazing British police procedural I heard about around the same time. I highly recommend it, but I can’t quite say it’s a Story I Love. More on why that is in a bit. 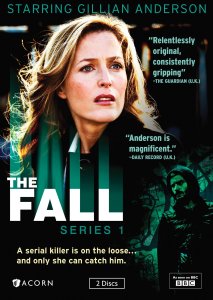 Jamie Dornan (Sheriff Humbert in Once Upon a Time) plays Paul Spector, devoted father and bereavement counselor by day, serial killer by night. Gillian Anderson plays Stella Gibson, a Detective Superintendent brought in from outside to essentially audit the stalled investigation into the Belfast serial killer.

There are references to (and even demonstrations of) the political and religious tensions in modern northern Ireland, but they’re treated matter-of-fact, as a part of everyday life. Viewers are also dropped into the midst of police corruption, of tangled personal and political story lines that may or may not come together in an understandable way.

After my thumbnail sketch, you probably won’t be shocked to hear this a pretty dark show. Some viewers have also felt it to be slow, but I didn’t find that at all. It’s sort of like the difference between watching paint dry and watching a masterpiece emerge as the artist applies layer after of color. There is so much depth, in both the setting and the characters.

I suspect there’s also some resistance to the portrayal of Stella Gibson’s sexuality. For example, I’ve seen some viewers refer to a particular scene as graphic, despite the fact she never even removed her skirt. And, as Stella Gibson points out to a superior officer, that’s the crux of the matter—many people find a woman treating a man as a sexual object to be deviant. Of course, she says it in much more explicit language, which Gillian Anderson delivers masterfully. 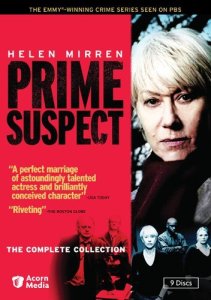 The straightforward way the The Fall presents the differences between the expectations for men and woman in the job reminds me a bit of Prime Suspect. (Who can forget Helen Mirren as DCI Jane Tennison: “Don’t call me ma’am. I’m not the bloody queen.”)

Stella Gibson is even more unsentimental than Jane Tennison. She seems to earn the respect of many of her colleagues, despite that fact that she is a complete outsider, living out of a hotel room. But she maintains so much distance that she is distant from the viewer as well.

When Gibson drops the occasional bombshell in conversation with a superior, we are completely surprised. As the series progresses, we do see a flash of dry humor here and there, and maybe even a hint of grief. But only a hint.

This is one of the two things that keep me from being head-over-heels in love with The Fall. In order to love a story, I don’t need to love the characters, but I do need to feel a strong connection with someone. As I said, I felt we were sneaking closer to Gibson as the season progressed, so much so that I probably would have tipped over into love, if it weren’t for the second thing: the conclusion of the season.

I started the fifth episode (only five?!!) wondering how the writers were going to bring everything together in an hour, only to find out that they weren’t. ARGH!!

I won’t give any spoilers, but let’s just say that there is no conclusive resolution to the serial killer pursuit, and many subplot strands are still left unconnected. It felt more like hitting the pause button, or the end of an episode rather than a season. I may have been less frustrated by this if I’d known to expect it (or had Season 2’s DVDs standing by) so hopefully—being forewarned—you’ll have a better viewing experience.

It really is an amazing show, and Gillian Anderson’s performance alone is enough to recommend watching it.