Raise your hand if you remember the 1990s. (Unless you’re wearing a T-shirt you bought at a Nirvana concert; then you can keep it down.)

Bill Pullman is one of those actors that I don’t initially remember being in things (my sleeping brain thanks me for blocking out The Serpent and the Rainbow, and all other Wes Craven movies), but he was in a lot of movies in the 1990s. They ranged across multiple genres, from the romantic comedy While You Were Sleeping to David Lynch’s Lost Highway (yes, I consider Lynch to be his own genre) to the blockbuster Independence Day. And then in 1998, there was a little film called Zero Effect. 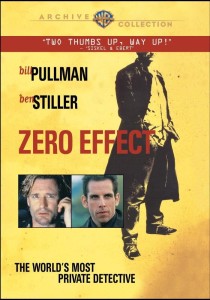 In it, a blonde Pullman plays Daryl Zero, according to the movie’s tagline, “the world’s most private detective” and self-described as “the greatest observer the world has ever known.” A recluse, he prefers to solve cases from his apartment lair (complete with Bond villain-like security and a lifetime supply of Tab), passing his down time by singing his own poorly written songs with even worse guitar accompaniment. Zero shares a number of characteristics with a certain other famous detective, including a fondness for providing the brain with dangerous levels of chemical stimulation, a penchant for disguise, an ability to make incredibly detailed characterizations of individuals based solely on observation and deduction, and a life philosophy with objectivity as its cornerstone (objectivity and observation are “the two obs”), a life philosophy that shall be challenged (again, Holmes-style) by The Woman (beautifully played by Kim Dickens).

But Zero isn’t just a Holmesian knock-off. Although arrogant about his own brilliance, he lacks the confidence to interact with people when he’s not playing a role. Even his explanations of his investigative technique (which you can watch him type on chunky desktops that seem dated even for 1998) are often hesitant communications. Here is one of my favorites:

Words to live by.

The parallels to a famous detective continue with remarkably not-annoying Ben Stiller as Steve Arlo, Zero’s representative, his emissary to the outside world, his recovering lawyer (not doctor) Watson. Together, Zero and Arlo become involved in a case that … well, the case doesn’t really matter, except to say that it involves corruption and deception and decades-old secrets and The Woman. Like all of my favorite stories, it’s not about the plot—it’s about the characters. And that’s where Zero Effect succeeds. Mostly. (Which is why this is a Story I Thoroughly Enjoy, not a Story I Love.)

The movie is a little inconsistent, losing its way just a tiny bit (which is the most important relationship? is it detective story spoof, homage, or innovation?) so that the pieces don’t always feel like they form a cohesive whole. But, the pieces! Oh my, the pieces! The pieces are pure gold (Zero and Arlo talking on payphones in an airport, for example), and throughout it all, the director’s love for the genre and for the characters are unmistakeable. And really, at the end of a long day with popcorn in hand, what more can you ask for?