I had a video call with someone this week who, wearing a cozy sweater, told me she’d gotten out her desk foot warmer (a gift created by her engineer husband to warm her feet, not the desk’s.)

I think the shirt I was wearing had sleeves.

Thanks to climate change, seasonal transitions are getting to be slippery buggers, with seasons slowly creeping into USSC Justice Potter Stewart’s hard-core pornography territory: “I know it when I see it.” (Jacobellis vs. Ohio)

But seasons have always been tricky here in East Hawaii, at least for someone used to a temperate climate framework.

So, how do you recognize changing seasons in East Hawaii?

Having grown up in the Appalachians, I do miss the leaves turning colors in the fall. That definitely does not happen here, at least not on any kind of scale. Some trees drop their leaves periodically. The invasive trumpet trees keep flinging their noisy, multi-fingered leaves outside my window. 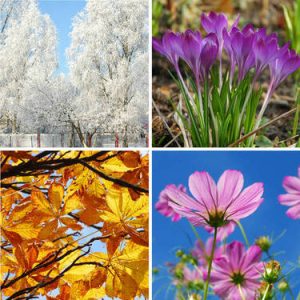 Our tropical climate also means there’s no final harvest to mark time, but you will notice a shift in what’s available in your local produce section.

Fruits are the most obvious (lychee is my favorite season), but vegetables cycle as well. For example, there seem to be fewer fresh greens available now. Then again, that availability doesn’t exactly align with Gregorian calendar seasons, and you can almost always count on bok choy. 😋

What about snow flurries?! I hear someone yell in the back. I know that’s meant as a joke, but here on Hawaii Island, Mauna Kea and Mauna Loa can get snow at altitude any time of year.

Of course, the only way any of it will make it down to our neighborhood is in the back of a pickup.

Then it must be the rain, right? I mean, the tropics often have wet and dry seasons, and you hear about Hawaii’s winter being the rainy season all the time. Yeah, about that…

At our house in East Hawaii, we just had our second wettest summer in the five years we’ve been tracking it, and we may have underestimated thanks to those damn trumpet trees shooting up near our rain gauge. (Our wettest summer was 2018, with over 55 inches of rain in August alone, thanks to Hurricane Lane.)

That’s why for me, the seasons changed this week when one very simple, easily identifiable thing happened: I took my first indoor shower.

Quick reminder—we live completely off the electrical grid with solar power and on-demand propane to heat our catchment water. Our little cabin tends to be about the same temperature as outside, maybe a degree or two warmer, both when it’s chilly and when it’s hot outside.

Our indoor shower is one of those tiny, molded acrylic boxes to start with, and I’m pretty sure they installed the plumbing wrong. Wait, wrong sounds so judgy. It was installed in a non-conformist way.

The box isn’t quite square, and instead of pointing the shower head the longer direction, it’s pointed the short direction. You don’t have to worry about bumping your elbows on the walls, but your face is so close to the shower curtain you feel certain there must be a serial killer on the other side waiting to smother you with it.

Welcome to a mystery writer’s mind.

And did I mention we put Ninja Kitty’s litter box in there?

This means the outdoor shower is our hygiene station of choice year-round, rain or shine… until the “cold” hits.

I’m usually the first to shower, and Paul follows my lead. My rule of thumb: the temperature has to be below 60°F for me to even consider showering inside.

When we got up yesterday morning, the temperature in our house was 59°F.

The temperature outside was 57 °F.

I was still game to venture into the wilds, mostly because I didn’t want to deal with the litter box. However, the wonderful Hubs did a quick sweep of the shower stall, and the wonderful dog Fred sniffed the litter box in the middle of the house but did not partake of any Scooby snacks.

[Full disclosure: there were no Scooby snacks or deposits of any kind. But if poor old Travis the Dingbat Dog was still around, he would devoured that stuff like a stoner with a bag of Cheetos.]

So I showered inside, and if it smelled like a cat pee sauna (it did), liberal application of tea tree body wash mostly overcame the odor. Once I could dislodge the thick gel from the bottle it had settled in.

This morning, it was 59°F. I returned to showering outside, and by midday it was 84°F in our house.

Until half an hour ago, when it suddenly went dark and started raining again.

So much for knowing the seasons when I see them. 😂