Hey, um… is it Friday again? [scrambles to blog]

I’m in the midst of some good stuff here, including trying to wrap up the rough draft of Sydney Brennan Adventure #8—has anyone seen a title lying around?—so I’ll keep this brief-ish, but I did want to share a little something cool that might make you smile.

Here in the tropics, you probably think we’re wading through fields of… well, just fill your favorite fruit or vegetable that comes in fields. But, as I noted last blog post (Changing Seasons, Hawaii Style) common expectations and on-the-ground reality don’t always align in the Aloha State.

My husband is nothing if not persistent when it comes to gardening. However, thanks to nonexistent soil and ubiquitous feral pigs, we haven’t successfully grown much in our little corner of East Hawaii. Most of what survives now does so in pots in the small, fenced portion of our yard. Outside of that fence is a no-man’s zone (no-plant’s zone?).

Feral pigs don’t seem interested in our herbs (though they’re vulnerable to a host of pests and the soup that is our humid air). Southerners will be either appalled or relieved to hear pigs also do not like collard greens.

But even plants that aren’t targeted as food fall become collateral damage when the porcine monsters root in the yard, peeling away the skin of grass and soil like a ripe citrus fruit.

That makes this all the more special. 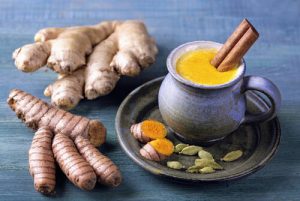 A while back (no idea when—time has lost all meaning since the Panda Bear Times), a friend gave us some fresh turmeric.

The tubers sat in a bowl on our counter forever, while we smiled at them and said cool, but had absolutely no idea what to do with them.

It’s fresh, so it’s gotta be something special, right? You can’t just grate some in a curry. (Assuming we made a curry, because I’m sorry, but I cannot do curry in our hot house in summer!)

And it might have—gasp!—rotted, unused in the bowl. (We don’t grow well, but our high heat and the aforementioned humidity make us excellent rotters.) Until…

If you haven’t had the pleasure, it’s a traditional Indian drink that is supposed to be anti-inflammatory and have all kinds of health benefits, thanks to the bright turmeric and other spices. And it’s just plain yummy. But it’s usually made as a hot beverage, and like curries, I don’t do a lot of hot beverages in our no A/C house in summer.

Ah, but thanks to Google, a pile of Golden Milk smoothies and frappes almost instantly appeared in my Downloads. 😋 (My current easy go-to is this Iced Golden Milk from 40 Aprons.)

I mean, it tastes fine I guess, but fresh turmeric… that’ll give you some zing!

Fortunately we set aside some nubbins to plant and hope for the best. Guess what?

For once, we got The Best.

Yes, this is a literal handful of fresh turmeric my husband pulled from the ground last weekend. And that was just one plant! Apparently pigs don’t like turmeric, either.

I’m sure you can guess what I’m drinking this weekend. Don’t worry, there are more guys on deck—the cutest little baby turmeric plants ever— to feed my impending habit. 😜