Here’s the second installment in a series I started a while back and forgot about—I mean, hadn’t yet returned to: The Writer’s Environs. The idea is to reflect on the places we live, both the commonalities and the things that make each piece of the world unique. In the first installment, I asked, What crosses the road? (Yes, pigs are still crossing our road; it’s been a very heavy pig season.) The question this week: Which plants are most likely to take over the world? 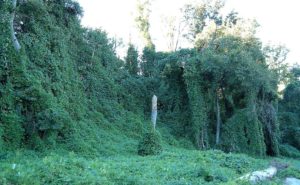 Anyone who’s lived or spent any time in the South is familiar with the apocryphal kudzu, the introduced vine that could engulf anyone with the poor judgment to nap next to a railway. The environmental impacts of kudzu may have been exaggerated (Smithsonian Magazine did an interesting story last year titled: The True Story of Kudzu, the Vine That Never Truly Ate the South), but it certainly does make a powerful visual.

We don’t have kudzu, but Hawaii’s tropical islands have a long list of plants that seem as if they’re just waiting for you to turn your back so they can eat you, or at the very least eat your carport. Even pothos, the vining plant found in every American office building, can be seen roaming wild in the forests and gulches, with feral leaves as big as your head. My favorite potential wild child is lilikoi. Lilikoi is the Hawaiian word for passionfruit (or granadilla in South Africa), a vining plant native to South America and introduced to Hawaii in the late 19th century. I’d heard that 15th and 16th century Spanish missionaries claimed the passion flower illustrated the crucifixion of Christ, but I didn’t realize how detailed their metaphor was. According to that arbiter of all things, Wikipedia: 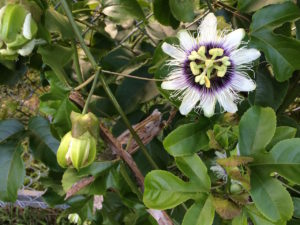 The pointed tips of the leaves were taken to represent the Holy Lance.

The tendrils represent the whips used in the flagellation of Christ.

The ten petals and sepals represent the ten faithful apostles (excluding St. Peter the denier and Judas Iscariot the betrayer).

The flower’s radial filaments, which can number more than a hundred and vary from flower to flower, represent the crown of thorns.

The 3 stigmas represent the 3 nails and the 5 anthers below them the 5 wounds (four by the nails and one by the lance).

The blue and white colors of many species’ flowers represent Heaven and Purity. 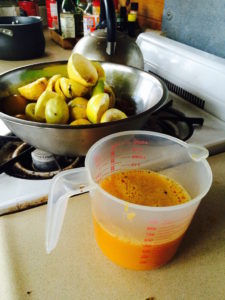 Whatever your theology, the flower is certainly gorgeous, and I daresay the fruit is divine. (Sorry—couldn’t resist, and if you’re offended it’s only because you’ve never tasted lilikoi cream cheese.) Lilikoi is incorporated into all kinds of desserts and pastries here, and it can take the place of lemon and many other kinds of citrus in just about anything. Lilikoi margarita, anyone? Our previous harvest became several jars of lilikoi jelly (intensely flavored, a little goes a long way), and the one before that was transformed into decadent lilikoi butter. (Mmm… butter.) This time around, we’re a little scared because we’re going to have so much. In addition to the vines on the carport (I keep waiting to hear the supports creak), the vine that was restricted to a palm tree in our front yard now spans two sides of our new chainlink fence and has turned the corner toward our dwelling on the third side. (I fear Google Earth images of our house will look like the intro from M*A*S*H within eighteen months.) And all of the vines are heavy with fruit. The juice freezes well, but our freezer just isn’t that big. If only the Sydney Brennan books were set in Hawaii. We all know the stereotype of the hard-drinking private investigator… perhaps a PI-themed wine? 😉 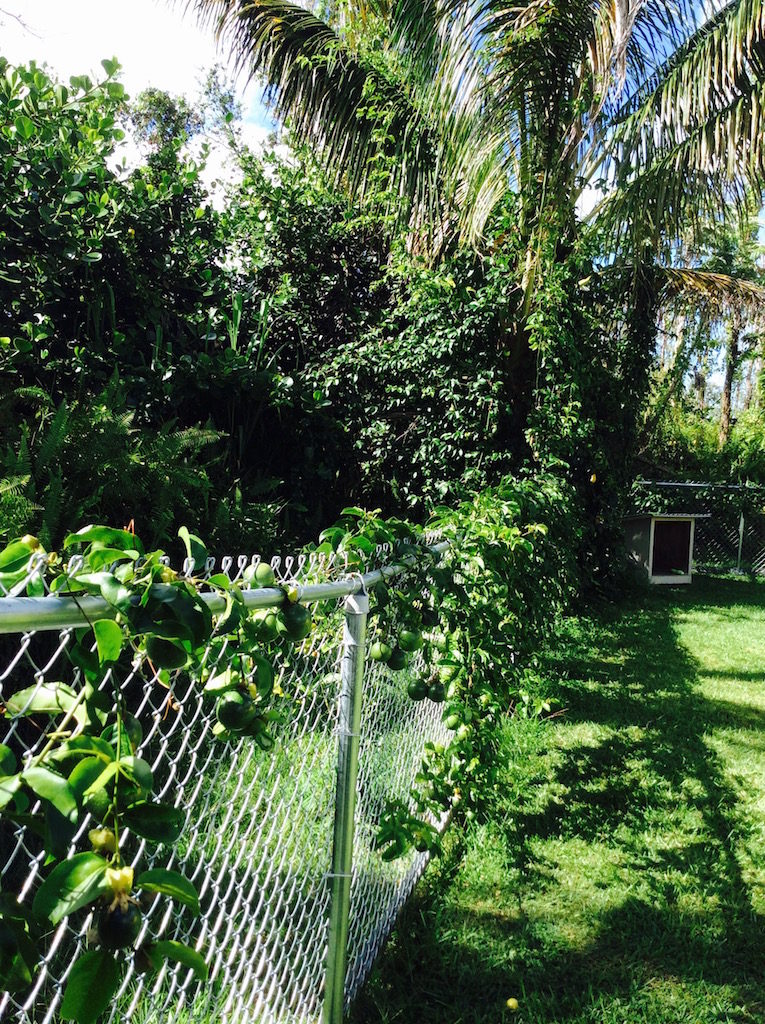 The lilikoi vine traversing the longest span of our fence 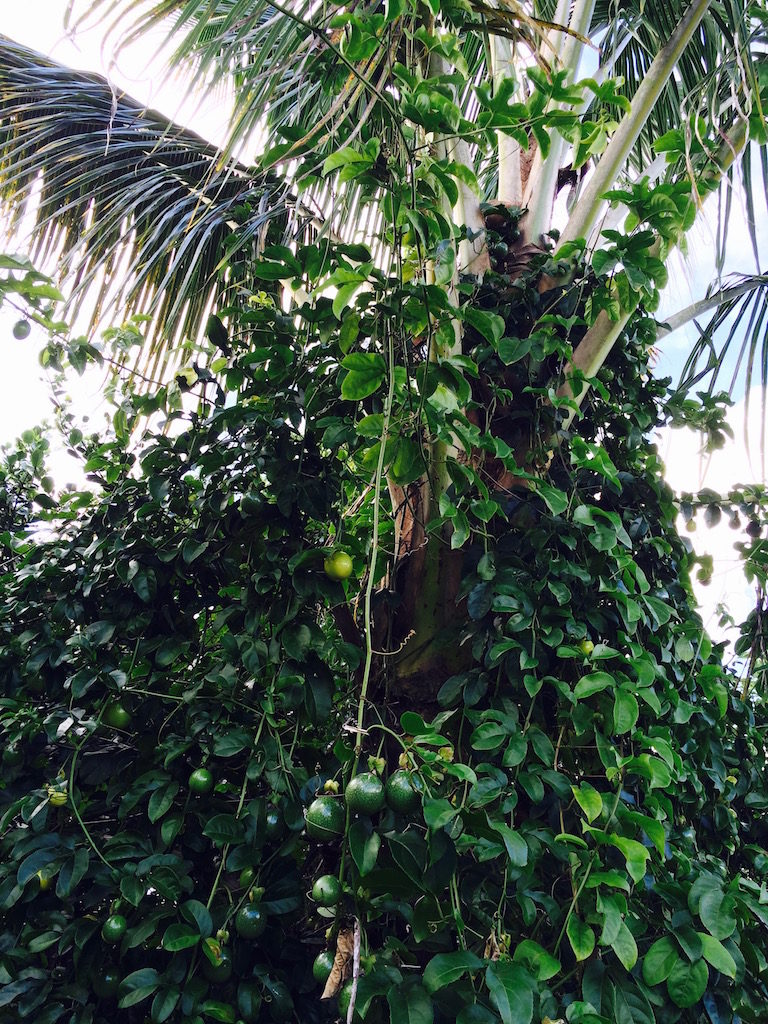 Hard to make out the green against the other green, but there used to be a palm under there. 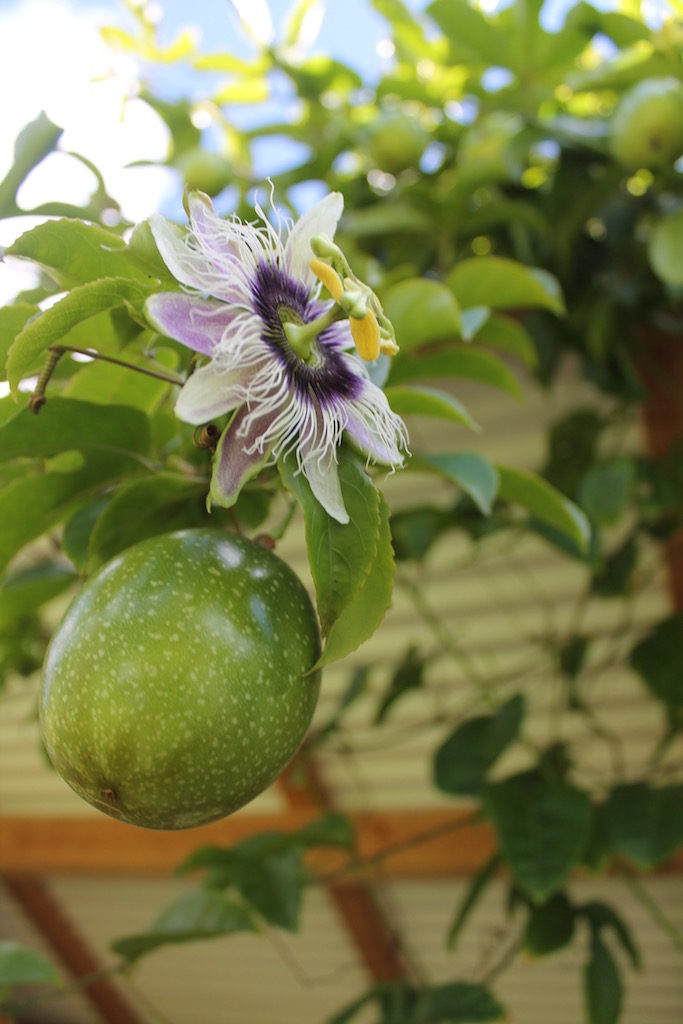 Doesn’t do much for our carport’s structural integrity, but it does improve the aesthetic 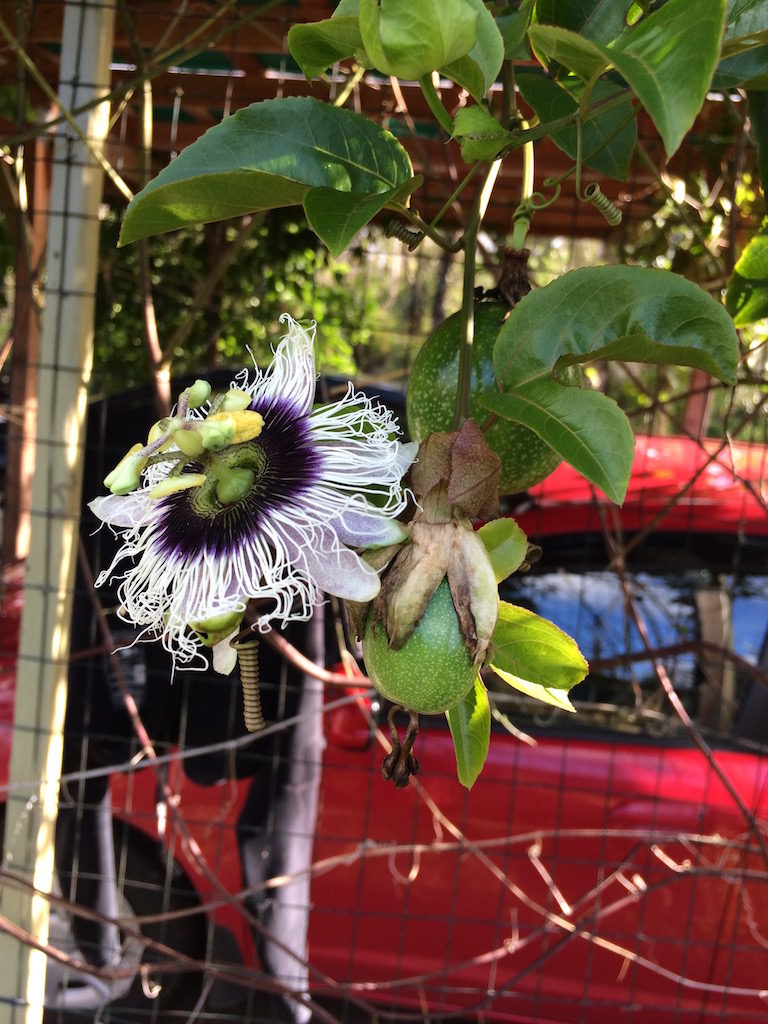 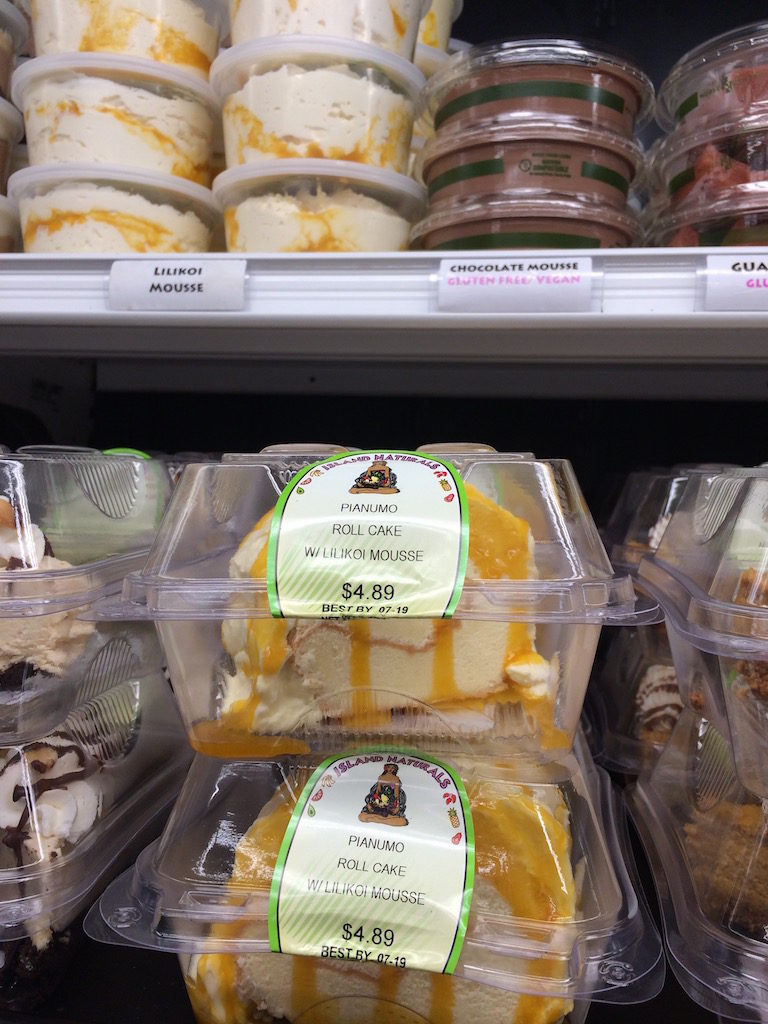 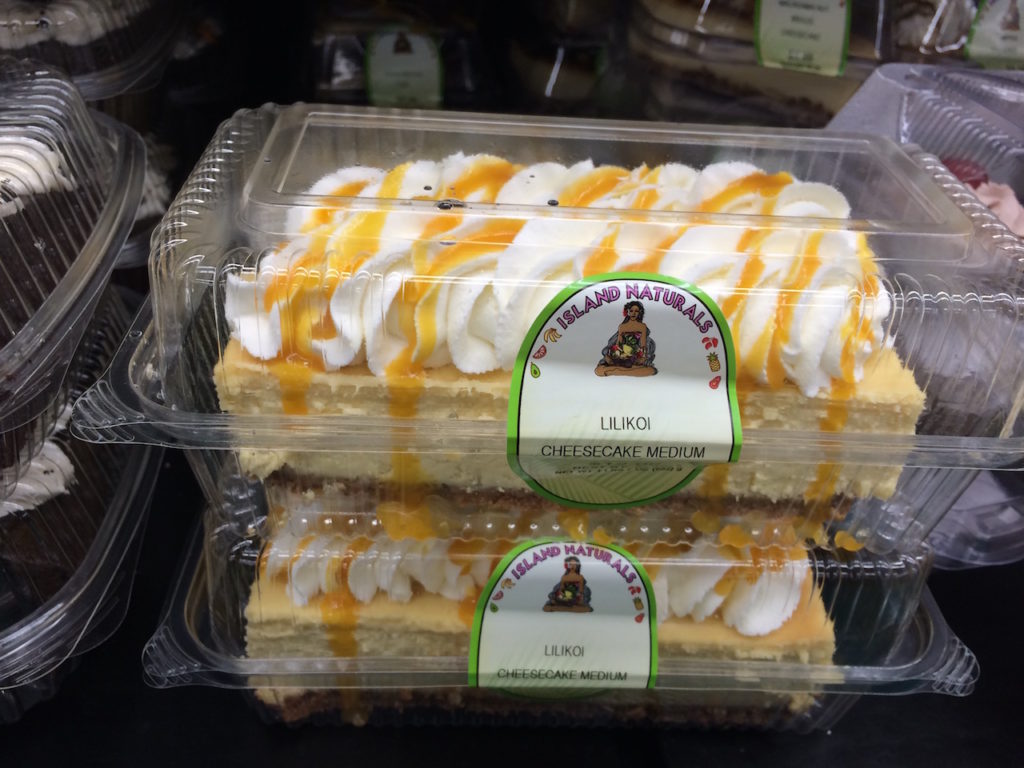 If I hadn’t been running errands on a hot day, this cheesecake would have gone home with me 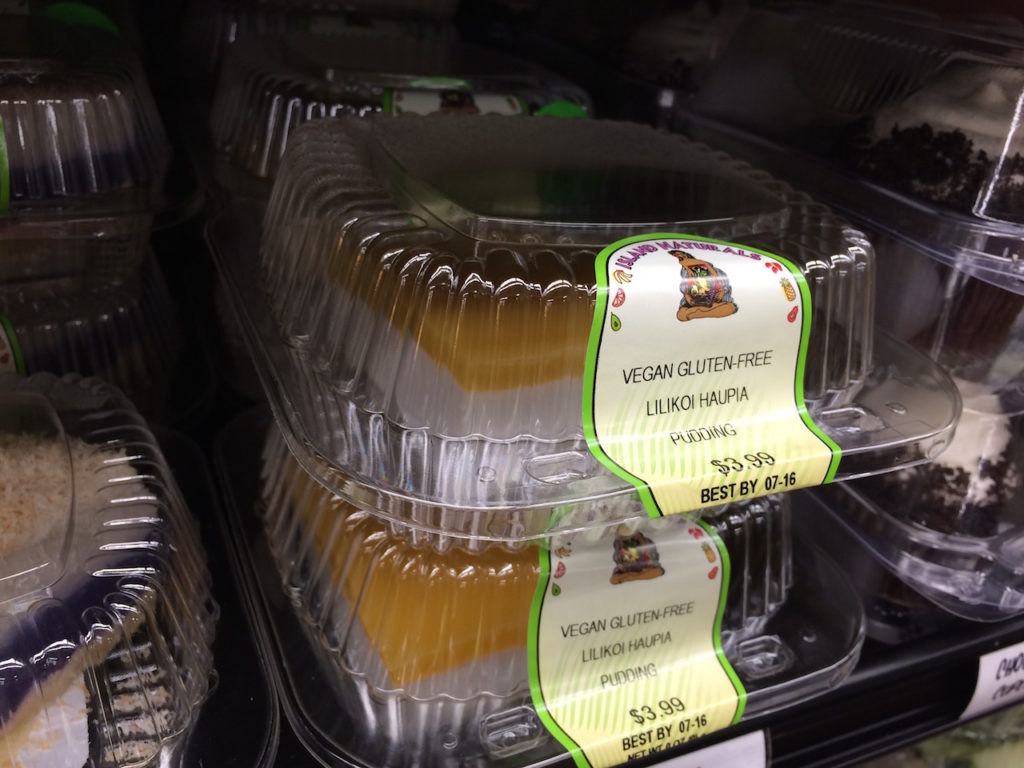 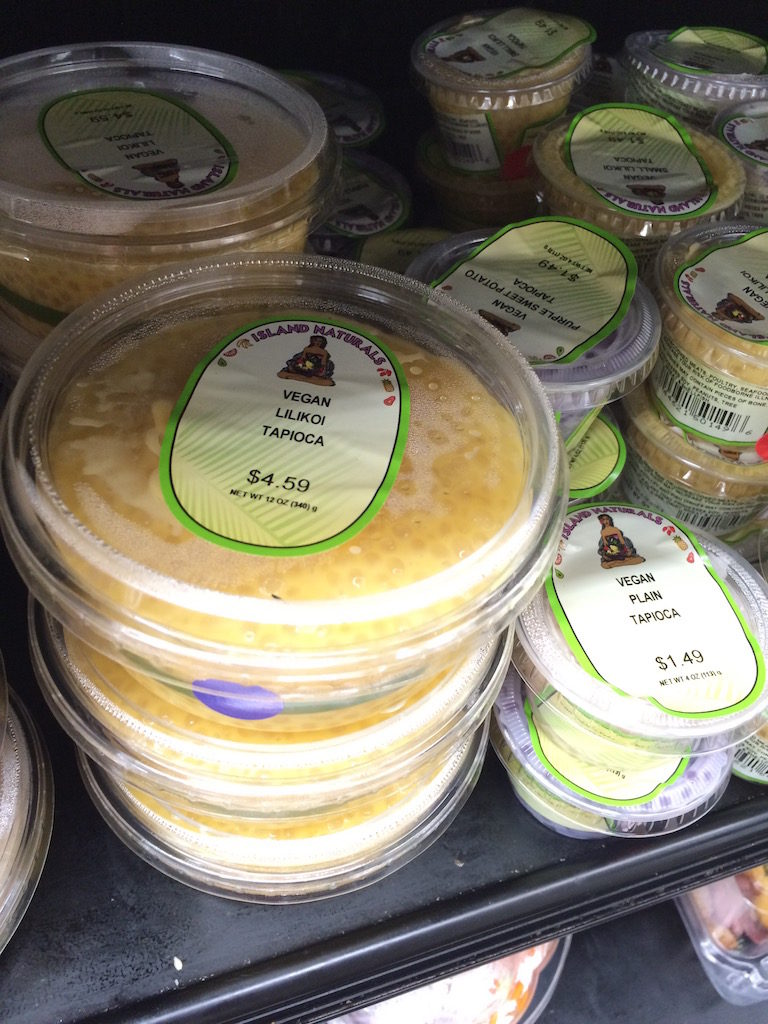 [Kudzu on trees in Georgia by Scott Ehardt (Own work) [Public domain], via Wikimedia Commons; all lilikoi pictures by Judy K. Walker]