Did you know that this Sunday (July 24th) is International Private Investigator Day? I’ve got something special in mind for next Friday (fingers crossed) for a belated celebration. In the meantime, I thought I’d share what passes for excitement in my writer’s world: new office supplies!

I’ve previously confessed my love for Post-its (Peeking at Process; Resolve to be Resolute). Well, my infatuation with office supplies doesn’t stop there. Last week, I was chatting online with a group of writers about tools and strategies for longevity. We’re all trying to figure out how we can make it to next month—much less ten years from now—without looking like bent crones and… what’s the man version of a crone? 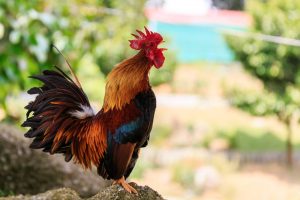 Anyway, it also happened to be Prime Day (a day of Amazon aggressively selling stuff, not celebrating singularly cool numbers), so dictation software was one of the hottest items going. I resisted for now, mostly because the Mac version wasn’t that compelling), but I did succumb to… the Roost!

No, I have not decided (as many of my neighbors have) to raise chickens. Instead, I purchased a perch for my laptop. I suppose I could have purchased a rack instead, something to straighten my back and limbs after I bend over my laptop for an insane number of hours every week. But if I’d gotten one of those, the only place we have room for it is under our carport, where it’s likely I’d accidentally hang myself from a lilikoi vine. Not to mention, it might make the neighbors talk (and that takes a lot in the Puna wilds). 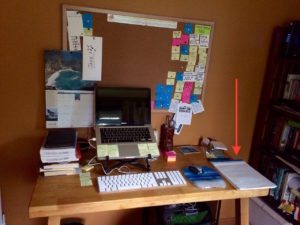 Behold my laptop sitting atop its Roost, with a keyboard nestled beneath.

I’m still trying to work out the ergonomics—my wrist rest is too big—and to be honest typing on a real keyboard is driving me a little insane. They look exactly the same in size, but I’m constantly hitting eject instead of delete and caps lock instead of I don’t know what. So far, I can barely type without looking at the keyboard, which sort of defeats the purpose of the raised laptop screen. But I’m sure I’ll get the hang of it in a few days.

You may also notice a new notebook to the right of the mouse pad.

Wait—that’s not a new notebook… it’s a poor transition to a mini-Magpie Moment.

The officers in the control center ignored us. The inmates in the nearby detention area were quieter than usual, probably assuming anyone coming in on a Sunday was a LEO. The men were just resuming their chatter when an officer emerged from the control center. He led us to one of the attorney rooms and closed the door behind us. We’d left our identification at the check-in, so the only objects either of us had with us were legal pads and pens. I flipped the first blank sheet over (call me paranoid, but I never write on the top sheet) and scribbled to make the ink flow in my pen.

Chapter Thirty-Seven, The Perils of Panacea

Yes, the blank top sheet is another habit Sydney Brennan inherited from her creator, a leftover from my criminal attorney days. 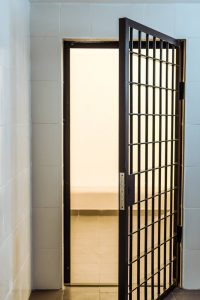 I’m not sure how it started—it’s possible being paranoid came before being an attorney—but it was a particularly useful practice for prison visits.

The prisons housing death row inmates were a couple of hours away, so we tended to visit as many clients as possible on a single trip. We also tended to “pack light” for prison entry because it made negotiating security checkpoints much easier. If I were visiting seven inmates, I certainly wouldn’t want to carry seven different legal pads, so I’d use one pad and leave the top sheet blank. Similarly, if I were doing a deposition or hearing in court, I certainly wouldn’t want to leave my notes beginning on the top page for the whole world (i.e. the prosecution) to read.

I fell out of the blank page buffer habit in grad school—I suppose I didn’t feel as secretive about phytoplankton—but I seem to have returned to it for writing fiction. Perhaps that’s because it’s consistent with the way I write fiction—hiding the story away until it’s finished—or perhaps it’s because the top page acts as another type of buffer. There was no chance of me spilling coffee on my notes in the marine science lab because drinks were strictly forbidden. (I’d have been less worried about damaging the flow cytometer than about damaging me should our nasty chemicals and microscopic beings make their way into my drink.)

The writer’s desk, on the other hand, is nothing if not powered by caffeine. 😉