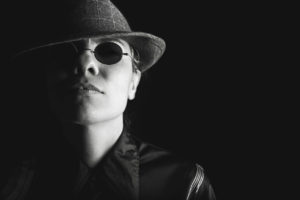 Happy belated International Private Investigator Day! My website went up shortly before P.I. Day in 2014, so it’s sort of my informal two-year anniversary as well. I was just feeling nostalgic rereading my previous two P.I. Day Posts (here’s Year One and Year Two; and yes, aloha shirts still make me feel like a walking armchair with buttons.)

Last week, I promised something special to celebrate. Then this pesky little tropical storm swept in, distracting me and throwing me off schedule. It was so humid the day before the storm hit that you could watch our bare feet leave footprints on the floor as we walked around the house. Humans and dogs. Gross, but true. I’ve also been distracted by this new trilogy project rolling around in my head. (I’m so excited, I’m bouncing on my yoga ball chair right now, just thinking about sharing some of the goodness with you.) In other words, I didn’t get around to doing exactly what I’d intended, but I think I’ve come up with a little something you’ll appreciate anyway.

One of the great things about writing a series is that you really get to know your characters. That can also be one of the bad things. When I’m writing particular scenes or mulling particular turns of events, the characters involved live in my head. They’re not always the neatest houseguests, and they tend to leave crap lying around when they leave. That means on any given day I might have a random thought like, Richard would love that song, or Glenn would totally kick that guy’s ass. (The latter usually comes up when a dude wearing more beer belly than leather is overcompensating with his motorcycle’s engine at a traffic light.) I think this is one of the many reasons why writing short is so difficult for me.

I returned to your promised short story recently, only to think, Maybe it’s really a novella. No, Judy, it’s not a novella! Unless I expanded it to include Syd finding—[insert dope slap here]. See what I mean? Because I know the characters, I often know what happened right before the story began and what happens right after it ends. But you don’t need to know that. You just need to know the story. Just that story.

I had originally intended to post the entire, unedited short story this week, but I’d like to spend a little more time paring it down to its essentials. I also realized that 10,000 or so words would be a little unwieldy for reading online. My solution: story chunks! I know, that sounds like a bad novel release party, but you get the idea. Ultimately, I’m going to have the story professionally edited and offer it for sale everywhere. But in the meantime, I’ll post it a few unedited pages at a time on my website for you guys, sharing my writing process and some behind-the-scenes commentary (alternatives I considered, things I cut, etc.).

Anyone who says surveillance is simple … well, that’s mostly true. But anyone who says surveillance is easy probably doesn’t do it that often, and probably has the anatomical advantage of easily peeing in a cup. Since I lack that advantage, I’d spent a recent afternoon crossing my legs while watching the business I was parked outside of now. The person I was looking for hadn’t shown, but I’d gotten confirmation from a delivery guy that she’d be here tonight.

Which brings me to another advantage of being a male private investigator—the ability to blend in at certain types of business establishments. Case in point …

“Tell me this isn’t a strip club,” my friend Noel said, but her voice didn’t hold out much hope.

“Remember, this is the woman we’re looking for. Her name is Emma,” I said, holding up the candid photo one last time.

Cecil’s interior dome light was not flattering to the curvy brunette, giving her skin tone a yellow tint and making her long hair look stringy and dirty. The camera flash hadn’t helped, either, reflecting off the glasses of booze and a nearby sequined top in a dimly lit bar. I tucked the photo back in a folder between the seats before we stepped out of the car into the cool evening air.

“You look nice,” I observed.

It was the first time I’d ever seen Noel wear jeans. They were so crisp, they could have stood up on their own. Her blouse had a bohemian feel, with full sleeves and a pattern whose colors were unidentifiable in the harsh parking lot lights. High-heeled boots peeked from beneath her jeans, and gold bangles flashed on one wrist, vivid against her dark skin. Her straightened hair was pulled back in a small bun, and matching gold hoops sparkled from her ears.

“Sydney …” Noel still clutched Cecil’s open door, as if she were about to jump back inside, slam the doors and speed away.

Not without the key, she wouldn’t. I tucked it with my wallet and cell phone in my pockets to keep my hands free, then took a moment to look around. We were surrounded by pine forest—beyond the parking lot behind us, on the opposite side of the highway, and on the far side of the aforementioned high-class (sarcasm) establishment. The trilling call of a chuck-will’s-widow seemed incongruous, cutting through the humid air where a wolf’s whistle would have been more appropriate. 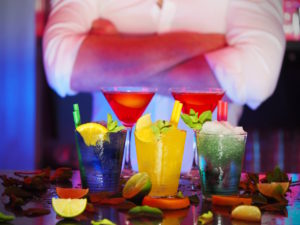 Club Revealations (no bets on whether the spelling was intentional or failure to proofread) used to be a fast food restaurant. Rather than remove the soft-serve ice cream cone sign, the current tenants had attempted to transform it into something more appropriate to the adult entertainment industry: a woman sitting on a reversed chair in heels and a shoulder-baring top, à la Flashdance, wreathed inside a golden heart. Unfortunately, the hint of soft serve swirls bled through her flesh tone, making the woman look more Jabba the Hut than Jennifer Beals. Calling the place a strip club might be giving it too much credit.

“When you said you needed help with surveillance at a club,” Noel continued, “I thought you meant a place with music. And dancing.”

“There will be music and dancing.” In fact, I expected our brunette Emma Larkin to dance onstage tonight as Aphrodite. Taking Noel gently by the elbow and leaning in conspiratorially, I said, “Come on. Where’s your sense of adventure?”

“I can’t breathe your hair,” Noel replied, waving a hand to push my fuzzy curls from her face. She allowed my hand to remain on her arm, more because her pointy heels didn’t cross gravel well than that she was getting into the spirit of the evening. “At least tell me it’s Ladies Night.”

“If by Ladies Night you mean featuring ladies on stage, then yes, it is. Every night is Ladies Night at Club Revelations.” I couldn’t bring myself to pronounce the extra “a.”

Noel stopped abruptly. “Are you serious? I can’t go in there and watch women strip! What if Grandma Harrison finds out?”

“Then she’ll think you’ve turned lesbian, blame me, hunt me down and shoot me.” Noel’s grandmother was a scary woman, and I happened to know she packed heat, so I did not take the prospect lightly. “But she’s not going to find out you went to a shitty strip club ninety minutes from Tallahassee. I know it’s hard to believe, but the woman is not omnipotent.”

A small wrinkle in Noel’s otherwise smooth forehead clearly said, That’s what you think, but she sighed and let me lead her toward the entrance.

[Man in fedora and sunglasses by Ryan McGuire and Bright alcoholic drinks by energepic, both from stocksnap.io]