Thank you to every one who keeps asking about our safety (and that of our dogs), but this will probably be my last regular lava update. I’ll pop in from time to time if something changes, and I’ll still post the occasional picture on Facebook, but honestly we’re at the “same old, same old” stage now. My husband spends many of his working hours and a fair number of his non-paid ones dealing with the impacts of the current eruption, and he dislikes the term “new normal.” It sticks, though, probably because it’s simple and we don’t have a better one. But for this post (and okay, most things that aren’t proper comma placement), I’ll indulge him. How about SO-SO? Short for same old, same old. And the meh sound of it seems appropriate, too. 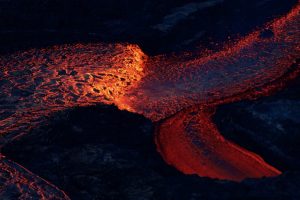 What is the SO-SO? For us personally, we’re safe but occasionally inconvenienced, and will continue to be so indefinitely. The lava continues to flow like a river to the ocean (if my conversions are right, hundreds of billions of gallons have erupted so far). The island continues to get bigger. We continue to have hundreds of earthquakes a day, most of them small and unnoticed. (Though we did have a lovely day a week or so ago with over 500 that were 2.5 M or more, and over 700 total.) The summit continues to erupt gases and ash every day or so, giving the people of Volcano a more significant jolt. Not to mention their martyred, buckling (and now sinkhole-ridden) roads. We continue to have good air days and bad air days. Or maybe okay air days and bad air days. 😛 And people on catchment continue to wonder about their water quality.

We’re on catchment, and any time our water has a chance to sit (in a container, in our pipes before turning on the shower), the nasty smell accumulates. A friend who lives much closer to the eruption said he’s noticing blue stains in his kitchen and bathroom sinks. Blue-green stains are common when acid rain is eating away at your copper pipes. The larger of our two fish ponds has had a substantial fish die off. I keep meaning to get a pH kit, but when I stopped at the hardware store they were sold out. Imagine that. 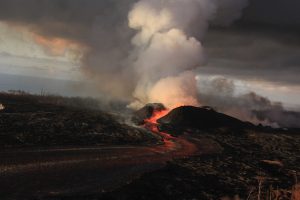 We still see the lava glow on the horizon at night, but it varies, and it’s not as bright as it once was. I’m guessing this is because Fissure Eight, the one that’s been most actively pumping lava, has built up a 180 foot high spatter cone. Monday we had thunderstorms from before breakfast to midafternoon. Having lived on the Gulf Coast for over a decade in my previous life, I have at least a passing acquaintance with thunderstorms, and it seemed like a strange time of day to me. It turns out the thunderstorms were created when the intense heat from Fissure Eight’s lava interacted with a low pressure system and the moist laze (lava haze) produced where the lava entered the ocean. Yes, you read that right — the eruption continues to create its own weather. During every dog walk this week, we’ve experienced a sudden, unexpected cold wind, followed by not-quite-drenching rain, tapering to a mist that seems more at home in the Pacific Northwest. Oh, and did I mention the lava whirlwind? Seriously. (Although I still think the blue methane flames in the road were cooler; that never gets old.) 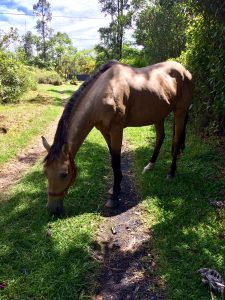 But what are you going to do? At least we’re not having a heat wave like much of the rest of the United States. Well, not away from the lava river, I mean. We’ve still got lilikoi growing on our fence and pineapples tumbling over in our yard, feral chickens leading troupes of fluffy feral chicklets down our driveway, along with neighborhood horses looking for grazing and maybe a little face-rubbing. Sometimes SO-SO isn’t so bad.

[Full disclosure: it’s dumping rain as I post this, and I’m trying to stay ahead of more forecast lava thunderstorms and/or stalling internet. But enjoy the pretty. 😛 ]