I know, I did a blog post last week. But it occurred to me today that 1) the world has felt rather dark lately (surprisingly, a lava-glowing horizon doesn’t help), and 2) it’s been forever since I posted a Magpie Moment.

(Reminder: Magpie Moments are bits of real life I’ve incorporated into my characters’ fictional adventures; you can find more in the Resources section below.) 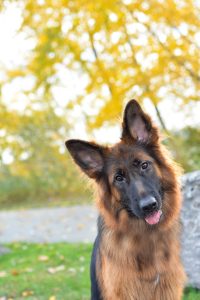 The dog followed them to the house and shoved a cold nose in Adam’s hand while JJ swore at the front door key. Adam’s heart pounded faster and his mouth grew dry and sticky.

Adam squatted next to Trooper to get acquainted while JJ wandered around flipping on lights. JJ was right; Adam wasn’t afraid of dogs as a rule, and he wasn’t sure what it was about this one that had made him so uneasy. Trooper was calm and affectionate, giving a measured lick when Adam rubbed behind one crooked ear. The other ear stood at attention.

“You’re a handsome boy, aren’t you?” Adam whispered, putting his face close enough for one last lick before standing.

As I’ve shared before, unlike Syd’s mysteries, Dead Hollow draws so heavily from my memories growing up in West Virginia, it’s like the whole series is a Magpie Moment. (Though those memories are already altered by time, see Alchemical Abode.)

But there are some specific details I can pull free from the text, and it’s always fun to see if family members catch them.

Trooper is one of these.

I don’t know why I still remember that Trooper was the name of my cousins’ German shepherd when we were kids. I may have spent almost every moment of my prepubescent summers with my cousins, but we didn’t often play with Trooper. He was more ever-present sentinel than play dog. And yet, he obviously made an impression. Perhaps it was the regal Schäferhund carriage. 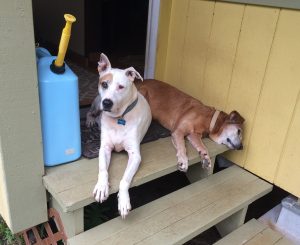 In any case, during the early chapters of Prodigal, I found Trooper flow from my fingers as the name of JJ’s dog. (I don’t think I made the connection until after I’d already typed it.)

But I didn’t want the kind of dog that you’d imagine standing next to a cop or sniffing luggage at the airport.

I wanted a dog that looked bad-ass and would do whatever was necessary to protect its human family, while looking less like it was his job and more like it was his mission.

That’s why I made him a shepherd mix to soften him, and then I went a step further.

I gave him our dog Fred’s ears—one up, one down.

Fred makes regular appearances here on the blog, including last week (and a starring Magpie Moments role in Animals with no Restraint as the inspiration for an avocado-gorging piglet in The Perils of Panacea). That said, a doggie post wouldn’t be complete without additional photographic evidence. (Ignore the water container; our dogs obviously do.) 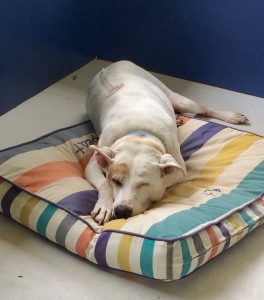 If you’ve read the most recent Sydney book, River Bound, you’ll recognize the ridge on Fred’s back.

In addition to the ridge, he shares some of Fred’s breed-consistent behavioral characteristics. Not barking, for example, which is mostly cool but occasionally terrifying. What makes a dog that has barked a grand total of three times in five years finally bark? 😳

As for how Fred snuck into River Bound as well, I suspect he spent a lot of time hiding under my desk from thunderstorms during the rough draft. Or maybe he sent signals into my sleep at night while vibrating beneath our bed.