I am such a big fat liar.

This shouldn’t surprise you—after all, I am a writer. But it does occasionally surprise me. What did I say in my previous blog post? No more lava updates. Well, that’s not exactly what I said. It was more like, no more regular lava updates. And even though talking about lava in the very next post might seem like a regular update, it’s not. It’s an irregular coincidence. Pinky-swear.

Whatever. It may damage my reputation for veracity, but I cannot remain silent. I have to share. Because, as some of my distant friends have articulated via email or other digital communication, OMG, LAVA BOMB? 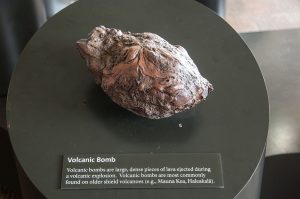 I’ve mentioned lava bombs before, that they can be noisy enough to wake us eight miles away (Waiting for the Big One), and that a lava bomb had caused the first serious injury associated with this latest Kilauea eruption (the May 2018 Reader Group update, aka my monthly Newsletter—that’s my plug to sign up, people!). The victim in that case, a poor Leilani Estates resident who’d stuck around trying to save houses, was standing on his lanai when he was struck.

So what is a lava bomb? Exactly what it sounds like. A lava bomb, or volcanic bomb, is a chunk of lava that spews from an erupting vent, flies through the air (not far if it’s ginormous, but as high as 3300 feet if it’s not), hardening as it goes, and eventually lands. They exhibit different shapes, depending on how big and viscous they are and how they fly through the air, including breadcrust bombs, ribbon bombs, twisted spindle bombs, spherical bombs, and ‘cow-dung’ bombs (these terms come from USGS; I swear I did not make the last one up).

I have a feeling I lost some of you back at “eventually lands.” Yeah, I know. Scary! But what are the chances? Well, I don’t know, but I’m sure various insurance companies and administrative officials were doing the calculations this week after a basketball-sized lava bomb hit a tour boat. Twenty-three people were injured, with just under half treated at the scene and the rest transported to the Hilo hospital. One woman was then airlifted to Oahu with a serious pelvic or leg wound. You can see pictures of the gaping hole in the boat’s metal roof here, as well as a video taken during the incident. I haven’t watched the video, but I saw a much shorter version and have to warn you that the sounds of terrified people screaming on a boat in the near-dark is pretty disturbing. 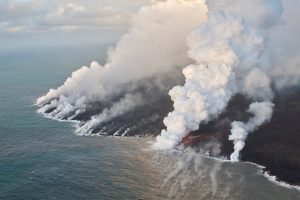 July 5, 2018 (USGS HVO, public domain) Lava enters the sea along a broad flow front on the northern (Kapoho) side of the flow.

If you prefer your spectacle without the trauma, check out this Instagram video of the explosion that produced the lava bomb. It was taken from another tour boat that was in the area at the same time and is still quite impressive.

How far the boat was from the lava’s ocean entry seems to be a matter of debate, but it had been given permission to approach as close as fifty meters, or just under 165 feet. As I look out my window and try to gauge what is 165 feet away, that just seems crazy to me. Since the incident, the permissible distance has been pushed back to 300 meters, or nearly a thousand feet. That still wouldn’t get me to the end of our driveway and back. I absolutely understand the inclination to get close to such an amazing display, but just be aware, people: there’s a reason we say that here on Hawaii Island, there is no velvet rope.