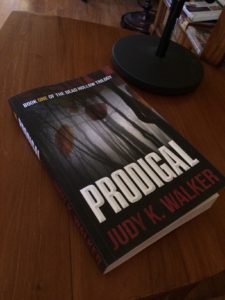 Yay! Prodigal successfully launched in ebook on Tuesday. The paperback has me ready to cut out my heart with a plastic KFC spork. (I wish I were kidding; fortunately I’m a vegetarian and rarely have those little bags of spare utensils handy.) Despite the headaches, the paperback will be live soon if it’s not already. You can see a picture of the proof on the dining chair next to my desk. (I might need a bigger desk.) As much as I appreciate the convenience and instant gratification factor of ebooks, there’s nothing quite like holding your paperback in your hands, and I love how my designer made the back cover pop (Robin rocks).

So most book-related things went off without a hitch this week, but I was reminded that my skills lie in writing, not marketing. I’ve struggled with how to find the target audience for Prodigal and the Dead Hollow series generally. You may recall that during preorder, I warned you this book would not be for everyone, and it wouldn’t even be for all Sydney Brennan fans. There are two major reasons for this, but because I’m a writer by nature and not a marketer, I only alluded to one of them before today—that this book deals with the kidnapping of a child. It’s a tough subject to read or write about, so I knew I would lose some of you. As for the second reason, I’m putting on my Big Girl Marketing Hat now and coming clean. (I don’t actually wear a Writer Hat because it keeps too much brain heat in.)

I’m one of those people who read primarily mysteries and thrillers, but I’ll try a little bit of anything and everything that lands in my hands. There are a couple of urban fantasy series (Mercy Thompson/Alpha & Omega and Harry Dresden) that I always follow, but I don’t read much urban fantasy beyond that. I enjoyed The Name of the Wind, but off the top of my head I can’t name another epic fantasy I’ve read in the past decade. I’m not a YA fan, but I enjoyed The Fault in Our Stars and the Hunger Games series (before the movies came out). I even liked the romance Me Before You (again, before the movie came out). I tend to forget that not everyone reads this way, which is why I should have confessed earlier: you may not like the Dead Hollow series because it’s got a little woo-woo. 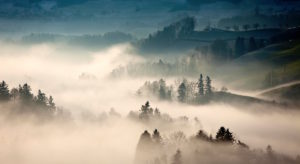 What’s that you say—you’re not familiar with the technical term woo-woo? It’s nothing to do with trains (as my favorite character points out in Prodigal). I mean the series contains some elements of the supernatural. See, as a writer—not a marketer—I wanted readers to experience gradually unfolding strangeness, as the characters do in the story. But as a reader, you’d like to know what you’re getting into before you buy the book. So now you know: there’s a little bit of woo-woo going on.

Knowing that supernatural elements can push people’s buttons, why did I include woo-woo in the new series? I didn’t want to, at least not initially. As I mentioned in the previous post (Origins of Dead Hollow), I was trying to write this book to market and listen to my muse. The market said kidnapping or serial killer genre, and my muse said here are your two characters; love them. (Which in muse-speak translates roughly to make their lives miserable—mwah-ha-hah!) The question was, what did these two characters bring to the “apprehending criminals” table? I knew neither of them was in law enforcement—in fact, I felt a sense of law-avoidance around Adam. I have to be in a rare, whimsical mood to read an amateur sleuth mystery because it bugs me when Jane or Joe Schmoe off the street is better at solving cases than the people who are trained and paid to do it. So what special knowledge or skills could my characters have, something that at least semi-plausibly gave them access and insight into a crime that most law enforcement officers lacked?

I discovered the answer in the protagonists’ shared past, a past that connects with the present crime. Eventually, I realized that their shared past was intertwined with the supernatural. I don’t want to say much (spoiler avoidance), but I will say it was important to me that the supernatural bits aren’t like superpowers. It’s something that isn’t commonplace for the characters, and isn’t under their control, nor is it something that they wish to possess. Discovering its origins will play out over the entire arc of the trilogy.

I knew I was going out on a limb with the hocus-pocus, but not only was it something that arose naturally from the story, I felt it also arose naturally from the setting. If you’ve ever picked up a Foxfire book, you’ll know that we have a long love affair with both story-telling and the inexplicable in the Appalachians, and even more so with the marriage of the two. I suspect this fascination is more common in places where people live closer to the natural world, unable to eliminate the darkness at night. (Here in Hawaii, there are stories of the Night Marchers and a hitchhiking Pele on Saddle Road that will definitely give you “chicken skin.”) It’s not that people in rural areas are more superstitious or credulous, or that they necessarily believe things that urban dwellers don’t. But they don’t necessarily disbelieve these things, either. Perhaps JJ Tulley sums it up best in Prodigal: “Believe is a strong word. It sounds too much like religion to me. Let’s just say, when a little girl’s life is at stake, I can’t see the harm in helping you follow through.”

So there you are. If you haven’t picked up your copy of Prodigal yet and the merest hint of the inexplicable gives you hives, you probably want to stay clear of it. But if you maybe wouldn’t mind dipping in a toe, consider taking a chance. You might just enjoy it. 😉