Now that The Perils of Panacea is in beta-land, one of my projects has been getting Sydney’s World organized.

Yesterday I started a new Scrivener file that I hope will be my Master File, the Repository for All Things Sydney: research, setting, characters, story ideas.

It’s a big undertaking, but I’m hoping it will streamline my creative process and save me time in the long run. There’s nothing like spending twenty minutes tracking down how long two characters have known each other—if you’ve even said—then ultimately EDITING OUT THAT SECTION, to make you think there has to be a better way. 😜 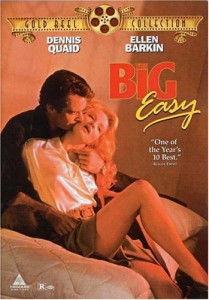 In addition to the world I’ve created, I feel somewhat constrained by the real world.

A friend in the entertainment industry once pointed out to me that movies and TV shows have to be careful about the liberties they take with New York City because so many people will recognize the inconsistencies and call foul.

On the other hand, it’s been a long time since I’ve seen it, but I believe I recall a scene in The Big Easy where the characters leave Tipitina’s (a club in uptown New Orleans) and find themselves at the lakefront, several miles and a world away. (We won’t even talk about Dennis Quaid’s accent.)

Setting Sydney’s adventures (the novels anyway) in the Florida Panhandle gives me some leeway. It’s more about creating a sense of place than knowing travel times among the boroughs in cabs versus the subway.

I have no qualms about creating a new town (see my post Not That Stockbridge), so long as it feels authentic.

I wrote Back to Lazarus several years ago, and I didn’t want to update it. The story of Panacea starts about six weeks later, still in 2004. (I imagine Stockbridge in the summer of 2005, but time isn’t as important for the novella.)

The longer answer is, that is the time I know.

My experiences as a criminal defense attorney were very different from Sydney’s fictional PI experiences, but there is some overlap. I know what it was like to go into jails and prisons at that time, to do a records search or go on an investigative road trip. I also have a sense of how it felt to be part of that community at that time.

Those details change, as they were doing when I left Florida in 2006.

Most people had cellphones, but they didn’t really text, and they didn’t have smartphones. The fax was still a workhorse (although it did use individual sheets of paper, not a continuous roll.) Agencies and organizations were moving toward more online records access, but the Florida Supreme Court still accepted pleadings in WordPerfect. (I wonder if the WordPerfect Goddess admin staff where I used to work were able to reclaim some of that considerable brain space after the program’s demise.)

But for each of these things, the importance of the change in terms of story is less about the technology and more about how it influences the way we live.

I have a challenge for you. Take one of your favorite story tropes from five or ten or (gasp!) fifteen or more years ago and think about whether it would work now.

I’ll get you started. Cue the suspenseful music…

It’s a dark and stormy night. 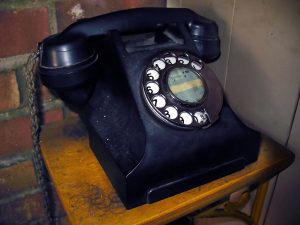 A tall, dark (there’s a lot of dark in these tropes) soaking wet stranger appears at the door. (Did I mention you’re a young, attractive, vulnerable woman? But you’re not having sex with your boyfriend; that’s a different movie.)

“I’m sorry,” the man says, in an oddly resonant voice, “but the roads are bad and I’ve had an accident. I was wondering if I could use your phone.”

Your response today? Probably not, “You poor thing. Come right in and let me lead you through the house so you can use my landline.” At best, you might hand him your cellphone through the door.

How many people even still have landlines? I don’t, but it’s a complicated rural-Hawaii-with-no-infrastructure thing.

That’s something to look forward to: explaining to future generations how the serial killer can cut (like, with scissors?) a phone line (no, not the phone charging cord, the part that let the voices come through).