I am so tired. Which isn’t exactly cause for alarm. It is, after all, Friday. The week—make that the past weeks—have caught up with me. Okay, before you zone out (this is going to be one of those whiny posts, isn’t it?), I have a PAA, Public Author’s Announcement. If you emailed me in the past couple of weeks and you do not get a response this weekend, I probably didn’t receive your email. Sorry. Apparently my webmail took a leave of absence, i.e. broke, while I was traveling. A few emails did get forwarded to another account and I’ll be going through them this weekend. But again, if you don’t get a response by Monday, it’s not that I’m too good to acknowledge you (arrogant fancy-pants authors!); I’m just… tech cursed? Maybe I’m a closet witch (any urban fantasy fans?). I’ve definitely had difficulties with modern transport lately. 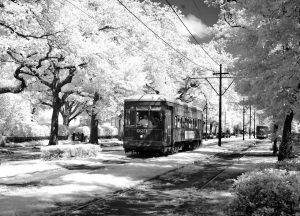 Which relates to the exhaustion, and dovetails with something I’ve been thinking about writing-wise: symmetry in stories, and how good stories often have bookends. That is, something about the story’s ending resonates with the story’s beginning. Real-life stories are like that, too, not just fiction. Last blog post, I shared some photos from a train trip in West Virginia, aka Dead Hollow land. What I did not share was how little sleep we’d had before that jaunt, and why. We’d spent the first portion of our off-the-Rock journey with family in New Orleans, pretending to be tourists. So much good food! And so many hours logged on the streetcar that I daydreamed about shadowing the conductor for book research. They have this crowbar thing they use… But I digress. [Tucking the streetcar idea into the Writer’s Rainy Day file]

We flew from New Orleans to Dulles, a couple of hours from my West Virginia family, as is our usual M.O. Unfortunately, things got complicated when the kind folks who came to pick us up got a flat tire near the airport (thanks to dead deer bits and glass on the road), barely limping to the parking lot, only to find the car had no spare tire. Do I hear car trunks opening around the world while everyone checks his or her own spare tires? Good. I’ll wait. (Every PAA post should also have a PSA.) 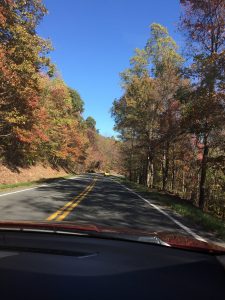 Too bad we couldn’t see the leaves at night

Add in cold weather, roadside assistance who couldn’t assist until the next day, rental agencies that were out of cars, rental agencies who did have cars for a king’s ransom, and the poor driver who needed a ride to another town and faced an odyssey to retrieve the stranded vehicle the next day… End result: we got “home” around three a.m. And we had reservations on the train the next day. Which is why last post’s photos appeared as though I was leaning against the window frame for support while taking them. (Shhh… I was.)

Having arrived in such a fraught fashion, some force in the universe was determined to make our journey symmetrical and add a bookend to our story. For our trip home, we were supposed to take an evening flight out of BWI to Seattle, where we’d sleep a few hours before boarding an early morning flight that eventually landed in Hawaii. After returning a second rental car (another long story), we checked our bag, made it through security, headed to the gate… and found our evening flight was canceled. (Be thankful my Spirit Airlines rant is locked inside me in an angry box.) We were stranded, and short of an intervention by Superman (the 1978 version), it was impossible to make our connecting flight in Seattle the next morning. Instead, we had to book a hotel to crash in, cancel our connection (and the Seattle hotel), book a new flight from BWI to Kailua-Kona, and reserve a rental car to drive a couple of hours or so across Hawaii island to Hilo side where we live.

Like how they peeled the grass off the cinder looking for yummies?

Now that was a long day: catching the five a.m. shuttle to board a flight, only to sit on the tarmac for forty minutes because the toilets wouldn’t flush; barely making our Phoenix connection (no time for food—we walked off one flight directly onto the next); and ultimately arriving in Kona to wait forever for a rental car. Okay, not quite forever, but it felt like it because we were trying to retrieve our animals from the kennel before it closed. We didn’t stop for food or even—gasp!— coffee, but we did pause for a three-minute bathroom and water drinking break at the rest stop on Saddle Road. We had just enough time to go home in the dumping rain to retrieve an additional car (we live close to the kennel and couldn’t fit four animals in the rental) and found… are you ready for this? A tree across our driveway. Seriously. I am not making this up. At least it was a small tree. And the feral pigs tore up our driveway (and our yard, and our sweet potatoes). Again. (Remember those Psychic Dogs?) But we made it, and three dogs and one cat were very happy to be home. Even if the dogs all have kennel cough. At least it keeps them mellow.

Please excuse me while I go take a weekend-long nap. And invest in some bookshelves.