They should have left well enough alone.


Florida PI Sydney Brennan needs a break. She just finished an intense week on the road, on the heels of a case that fundamentally changed her life. And nearly got her killed.

That’s why an exhausted Sydney is doing her best to pass out in her favorite bar (no booze required) when her world tilts on its axis again. Someone she hasn’t seen in more than fifteen years walks through the door, and he asks her to take a little trip with him.

Their journey starts out as a simple one—I just need to see her; she doesn’t even have to know we’re there—but soon they are tangled in a web of secrets and lies, threats and accusations. And the one person they wanted above all else to keep safe is suddenly in jeopardy.

Because there is nothing more complicated—and dangerous—than finally facing the past.

Memory Lane is the eighth installment in the Sydney Brennan PI Mysteries, featuring the Florida private investigator with a knack for getting into trouble who doesn’t know when to quit. These books stand alone but are best enjoyed in order, starting with Back to Lazarus.

Please do not read this book if you haven’t read Grave Truth. You won’t have trouble following the story, but Memory Lane’s entire premise is a big spoiler for Grave Truth, and no one wants that. 😉

I sighed, squinting against the early evening’s low sun, and clutched the steering wheel in full defensive, maybe-I-shouldn’t-be driving mode. One hand relaxed long enough to signal for Cooper’s Bar.

Because when you’re too exhausted to drive, obviously your destination should be a bar.

The sound of gravel popping beneath my tires drifted through the car’s open windows while the white noise from the nearest major street gradually subsided. Dappled sun flashed through the trees at the far end of the lot, reflecting off my windshield and making my head ache.

It felt like a lifetime (to the extent my exhausted body was capable of comprehending time), but I’d last been to Cooper’s two weeks ago and I hadn’t even made it inside. It had been even longer since I’d seen my friend Noel here, and I’d ended that evening by nearly bludgeoning a man to death with a lug wrench in the parking lot.

Not, I’d been informed, a tire iron.

Hopefully, tonight would be less eventful.

I doubted many of the dozen or so vehicles in the parking area belonged to Cooper’s customers; the lot was also convenient parking for a nearby walking and biking trail. I pulled into the first empty spot, next to an ancient blue pickup that looked like it had escaped from farm duty, and cut Cecil’s engine. A dragonfly danced into my line of sight, whirling around my Cabrio’s hood toward an unpromising-looking, leggy weed.

I blinked hard and rubbed my hands over my face. The dragonfly shot back into my blurry view, its golden-brown body doing a kamikaze run at my windshield before veering off at the last second. My mind had all the scattershot motion of that dragonfly, with none of its resilient energy.

My dry eyes drifted to half-mast. Temperature in the high seventies, the air still held a hint of spring. A drunk or just plain joyous whoop from one of Tallahassee’s tens of thousands of undergrads echoed in the distance, briefly rising above the humming insects that would be unbearable a few weeks from now.

Who knew a bar parking lot could be so relaxing? So soporific.

I blamed Roger for the three-dollar word popping into my head, Roger being the man responsible for my sleep-deprived state. Last Wednesday night, I was having dinner with said criminal defense attorney and his sister when Roger got a phone call. A case previously simmering on the back burner had suddenly gone flambé and sent me on the road.

The glamorous life of a private investigator.

I pulled my keys from the car ignition, clumsily dropping them on the floor mat. Lacking even the energy to swear, I lurched out of my car with an inarticulate moan, wiping the mat grit from my fingernails onto my jeans.

Endless stairs are the first design flaw at Cooper’s entrance; the slightly raised threshold is the second. I passed both tests without stumbling to find it relatively quiet inside. A few round tables and booths and a single pool table were occupied by a mix of genders and races and dress codes. College Town meets The Capital, a common theme in Tallahassee.

The man behind the bar had his back to me, but Glenn’s bulk and the reddish-brown braid hanging between his shoulder blades were unmistakable.

He turned as I crawl-climbed onto a stool.

“Red!” he said, referring to my unruly hair, not his own, which was darker. His mustache curled into a grin. “You know it’s always a treat to see you, darling, but you’re looking a little rough around the edges.”

Rough. Like the sandpaper in my eyes. “Road trip,” I said.

One of my butt cheeks crept slowly off the wooden seat. Glenn grabbed my wrists and pulled my arms forward as if securing them to the bar with Velcro. I should be so lucky.

“Can I trust you to sit here a minute?” he asked.

“What the hell’s that supposed to mean?” I demanded, still perched precariously atop one cheek. I kept my elbows planted, glad for the early hour and Glenn’s compulsive bar wiping.

Soon Glenn emerged with a couple of glasses and motioned for me to follow him to a booth.

“Wow,” I said, making a conscious effort to let go of my irritability as I slid onto the vinyl seat across from him. “I’ve never seen you actually sit anywhere but behind the bar. I feel special.”

“Uh-huh. I think we’ve previously covered how goddamned special you are,” he said, handing me a beverage before swirling his glass slowly and taking a big swallow. “By the way, your Coke is not corrected.”

Sticky, caffeinated carbonation fizzed down my throat and burned a tiny sliver of the muddiness from my brain. I wasn’t the only one who’d been out of town since I’d set a shitstorm in motion last month; was that what was on Glenn’s mind?

“You get your friend squared away?” I asked obliquely.

Glenn shook his head. “You don’t want to know.” A phrase that, when dealing with him, was literally and infallibly true. “Again, always glad to see you. But you’re dead on your feet. So why are you here?”

He blinked, mildly surprised. “She okay?”

I shrugged. “Have to ask her.”

I wasn’t trying to be snotty, but Glenn still shot me a look that could shrink an alpha gorilla’s testicles. Fortunately, I don’t have testicles, gorilla or otherwise.

He closed his eyes briefly, either centering himself to deal with me or calculating the distance to his nearest firearm. He didn’t get up when his eyes opened and I probably would have noticed a gun strapped under the table, so I was guessing the former.

“I may not be privy to the particulars, but it’s obvious something’s been bothering Noel of late,” he said. “And I don’t normally see her outside of a Friday night.”

“What do you mean, outside of a Friday night?” I asked.

Glenn’s eyes narrowed, assessing whether I was messing with him. Finally he said, “You do know today is Wednesday?”

I glanced toward the bar—as if Glenn would have a calendar there—then recalled my earlier motel calculations. Wednesday, Thursday… I’d been right the first time. I’d spent exactly one week on the road. So why wasn’t I at home in bed?

I groaned, burying my fuzzy-haired head in my hands. “Goddammit!”

“Don’t even think about laughing,” I said.

My stiff neck twinged as I jerked around at a patron bursting through the door behind us with a mad cackle. Pain shot to my hips and down the sides of my legs.

“You gonna take care of that?” I snapped.

Glenn slammed the rest of his drink before excusing himself to deal with the customer.

I rested my chin on my hand. Fine, I mean, my face on the table.

“Sydney?” A deep, masculine voice rumbled my name. I ignored it. I felt a gentle, calloused hand on my arm, followed by a whisper in my ear. “Hey, Red.”

Lifting my head reluctantly from my elbow crook, I prayed I hadn’t drooled and scanned my surroundings. Strangers in conversation over beer. Cheap blinds on the windows. A new game racking and breaking several feet away. I was still at Cooper’s. In Tallahassee.

“What do you think this is, a hotel?” Glenn asked, but he was smiling as he slid into the booth opposite me again.

I inhaled a graceless, semi-snort while I tried to gather my wits, then capped it off with a yawn. Why had I thought it was Friday already? And in what other ways had I shuffled my schedule and dealt out the cards upside down?

Glenn said, “Somebody was asking about you in the parking lot.”

“Shh.” I waved a hand vaguely through the air, unwilling to process new information. “I’m still mad at you for not telling me it was Wednesday.”

“I did tell you, once I knew it was news to you. I’m sorry, darling,” he drawled. “I can understand why you might think I’m omnipotent, but that is in fact not the case.”

“Omnipotent,” I said, drawing out the syllables. My mouth was sticky with Coke sugar and a week on the road.

“There he is,” Glenn said, lifting an arm at someone behind me. An edge of tattoo flashed from beneath his shirt sleeve.

“Omnipotent,” I repeated, attempting to loosen up my tongue and saliva, then shook out my hands to get the blood moving. “I thought I was the exhausted one. Don’t you mean omniscient? Or was saying omnipotent a prelude to sex jokes?”

“What?” I craned my neck to look up at him and continued, voice husky and teasing. “Come on. Omni Potent? You’re telling me that’s not an excuse to stroll down memory lane, maybe catalog the number of times and positions that we indulged—”

“Syd, this is the guy I was telling you about,” Glenn interrupted, stepping forward to make introductions. “The one from the parking lot. I’m sorry—what was your name again?”

An anxious, prescient prickling assaulted my nerves. It rushed from the base of my spine to my skull, giving me goosebumps. I turned and leaned sideways to see around the seat back.

The visitor was someone I hadn’t seen in over a decade.

His short hair wasn’t quite the military short he used to favor and now showed more gray than brown. The Florida sun had deepened the folds connecting his nose and mouth, as well as smaller laugh lines and crow’s feet, but the tanned skin lent his face vitality. Even behind his familiar, black-rimmed glasses.

Glenn snapped his fingers and said with satisfaction, “Eldon! Right?”

But the man only had eyes for me. “Hello, Sydney,” he said, voice rough with emotion.

I blinked. Swallowed. Finally managed to get out a single syllable. “Dad?” 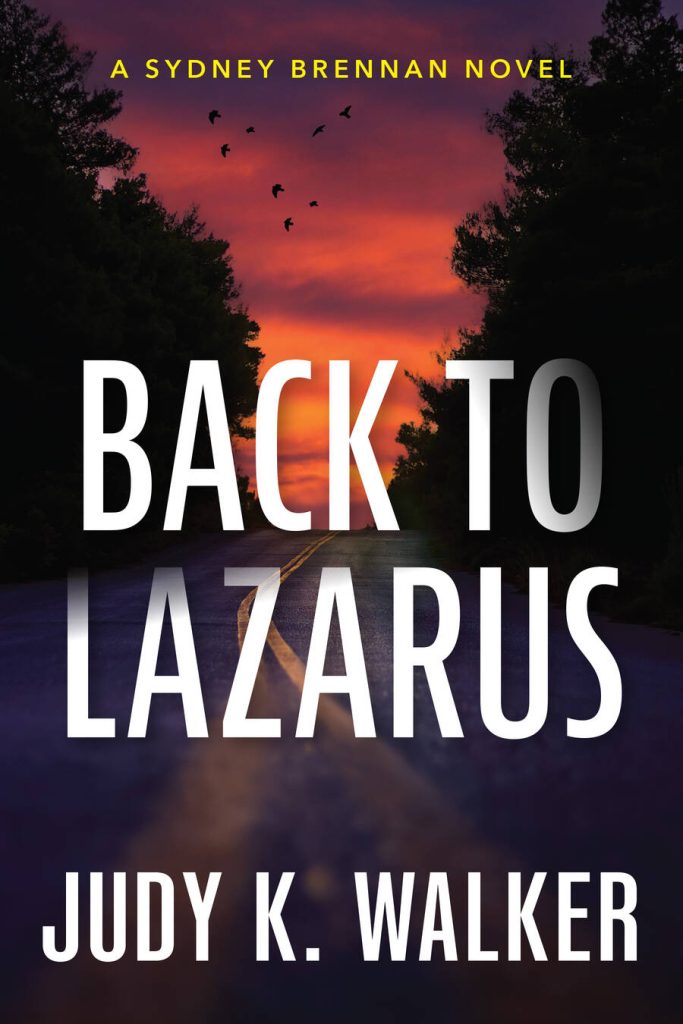 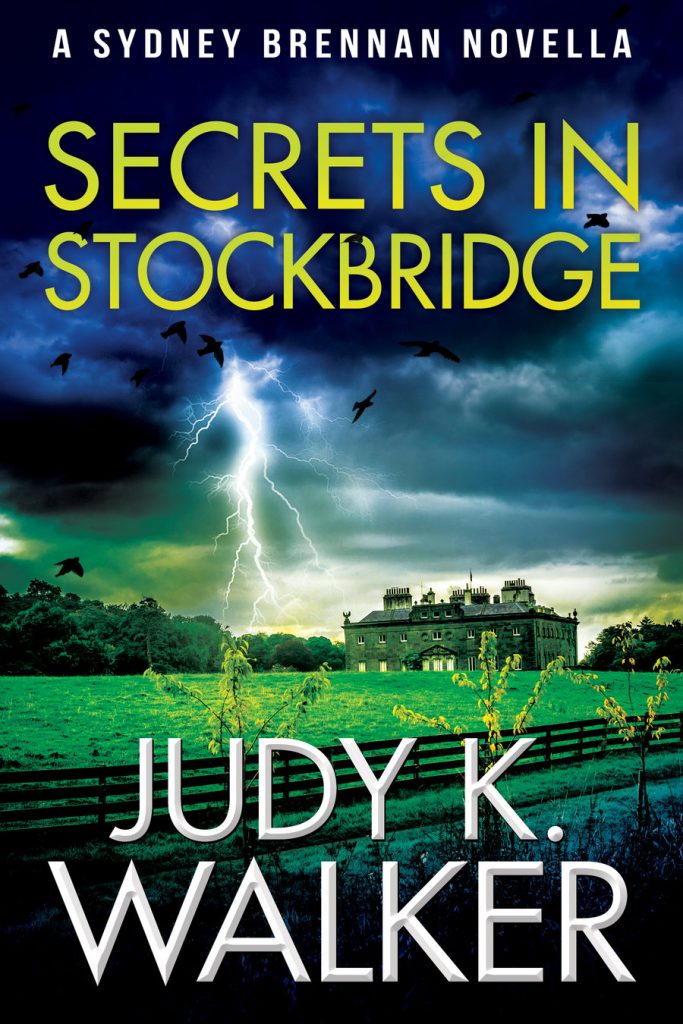 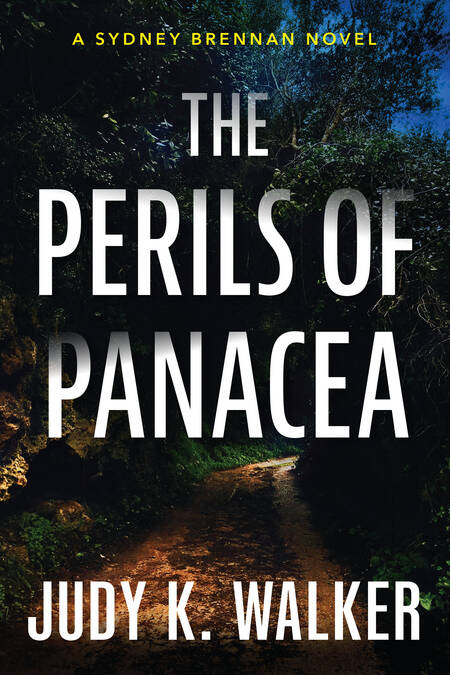 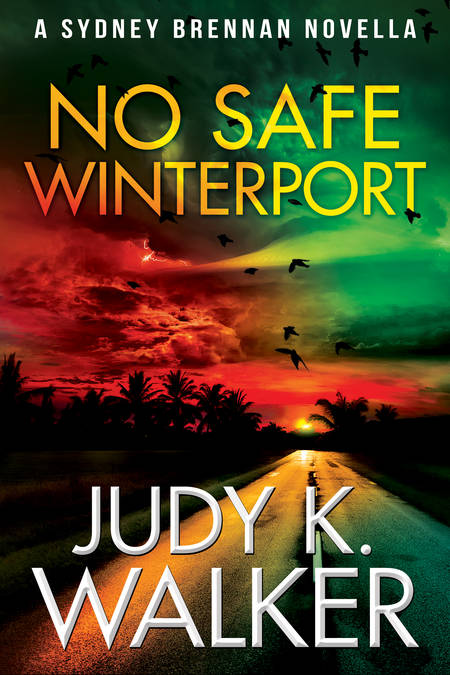 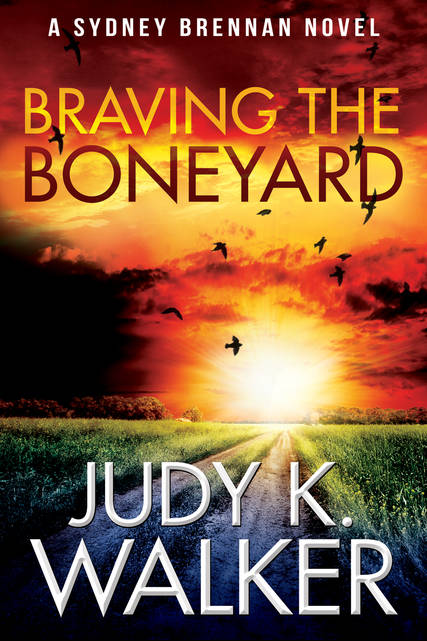 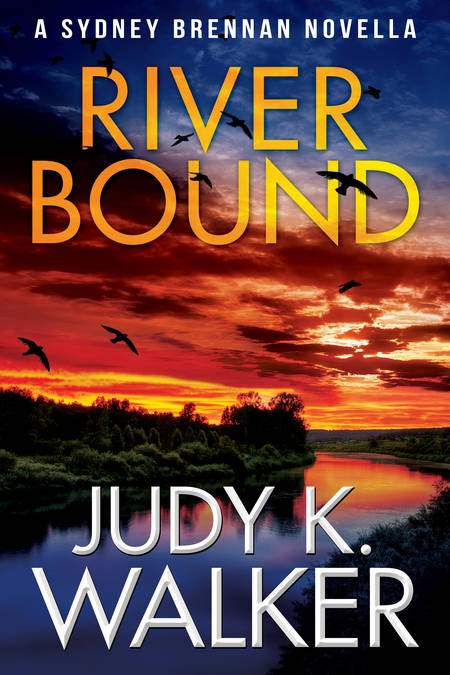 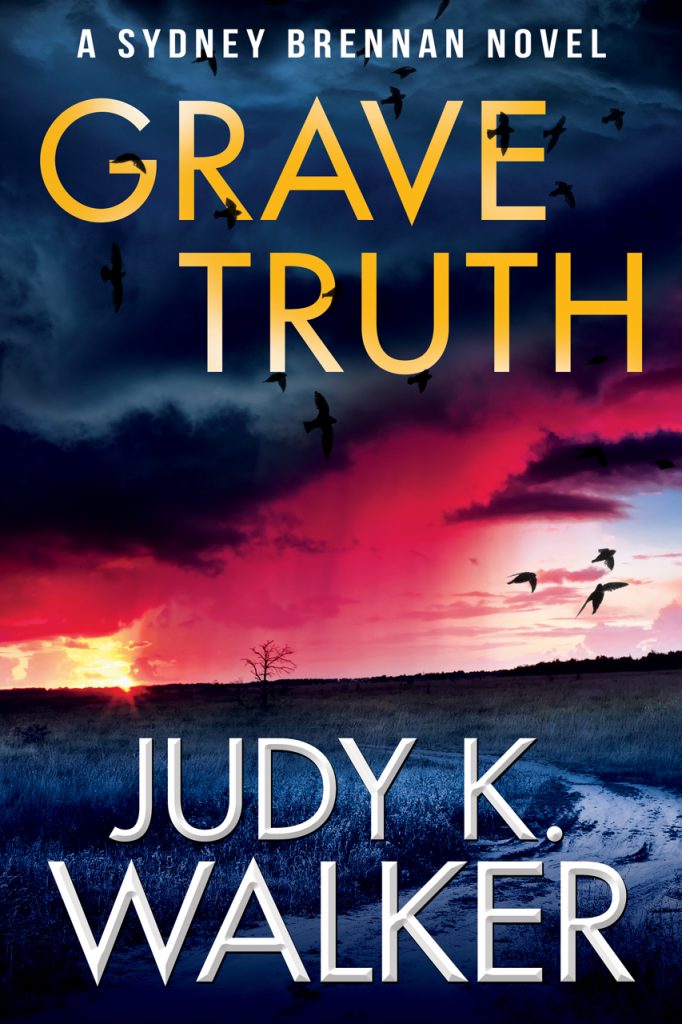