I missed the blog post last week—for reasons I’ll share below—and I’ve been mostly off email and social media lately, so I wanted to at least do a quick check-in today.

Between the ridiculous cold in the United States and the ridiculous heat in Australia, I’m guessing a decent number of responses would be, “Fairly shitty, but thanks for asking.” Or at least, fairly uncomfortable. 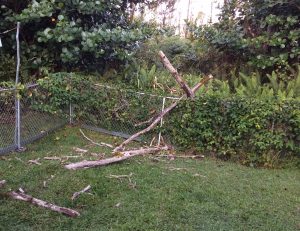 I can’t complain about comfort. Here in East Hawaii, we’ve had nothing extraordinary temperature- or precipitation-wise (although we could use some rain as our roads and catchment tanks are feeling parched).

But we have been doing our small part to keep up the “extreme weather” theme that seems to be sweeping the globe, and spent several recent days under high surf and wind advisories.

Lower Puna has been hard hit over the past few years by Rapid ʻŌhiʻa Death disease (ROD), and much of the forest surrounding our house is dead. That means I heard a lot of snapping and cracking in the heavy wind. Still, I figured by now all of our near-hurricanes would have taken out the bulk of the wind-vulnerable vegetation near our house.

(Near-hurricanes meaning either near-misses of actual hurricanes or direct hits of former and almost-still hurricanes). 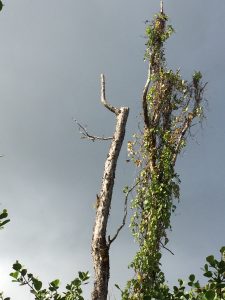 A few nights ago, we sprang from the bed in response to a clatter that was not Saint Nick, but rather a rotten ʻōhiʻa falling in our yard.

The top thirty feet or so of a nearby dead tree had snapped off. We were very lucky it didn’t hit our house. Bark chunks landed in the dog water bowl under our entry overhang, and one tiny branch drove itself eight inches into the ground and had to be removed with a shovel.

We were also lucky that it hit our fence precisely where it did, on or just next to the post. The cement footing broke, the post bent slightly at the base, and the entire top section popped free from the corner, but it appears that the boundary will continue to stand. 🤞

For now, the ubiquitous feral pigs are safe from our dogs, or perhaps it’s the other way around. 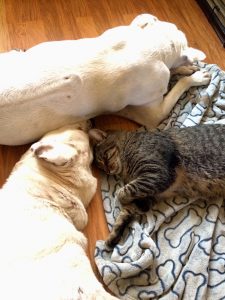 You may recall me sharing about six weeks ago that Fritz was having health issues (Pot Bellies and Piddlers). At the time, he was getting healthier, but soon after that post he got sick. (I blame a can of tuna.)

It took a while to get his digestion straightened out, and he never recovered. Instead he took a dramatic downturn, going from slow but steady half-mile walks to being unable to stand without a boost. Then he couldn’t walk without help.

Cue towel assists, then a special harness, and eventually a lot of lifting. (Fritz weighed around seventy pounds, so my husband did squats, but during the day I had to get creative.) His appetite went from always hungry to no thanks, with us cycling through every food in the pantry and every trick in the book.

Finally, over the past week Fritz stopped eating and drinking, and we knew it was time to let him go.

Now we and the remaining dogs and cat are digging out of Hospice House, a place with oddly arranged furniture, copious quantities of dog bedding, and enough cans of pumpkin for a pie contest.

And a place that feels oddly quieter.

We’re trying to find our way to a new normal. Not to mention catching up on everything that has been a lower priority than taking care of Fritz for so long. Which, honestly, is pretty much everything.

In other words, I’ll continue to be sluggish on my responses for a bit longer. And thank you for your patience and all the warm thoughts you’ve shared of late—aloha!