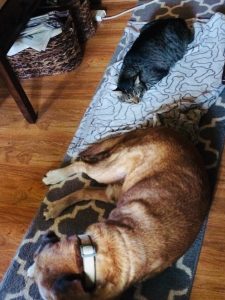 Thank you to everyone for the warm wishes on the passing of poor Fritz. It’s an experience many of us have shared, so the Humans get hugs (virtual or otherwise), but we tend to forget about the effects on the rest of the pack.

I’m certain animals have their own grieving processes. Ninja Kitty has been ridiculously affectionate, always wanting love, but is beginning to transition back toward his default state of obnoxiousness.

Travis and Fred seem more subdued generally, especially Fred. Of course, it’s easy to project our own feelings onto our pets, so I try not to read too much into Fred’s sighs.

I have, however, noticed one alarming and unfortunately objectively verifiable behavior change, one so dark, I hesitate to share it here. But hey, who else would I terrorize if not my Blog Buddies? 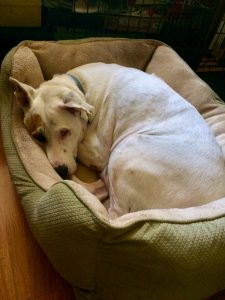 Fred has always been the “good dog,” relatively speaking. Leaving aside the incident of the avocados and the gouged table that inspired a Magpie Moment (Animals with no Restraint).

He is our anchor, the one dog who will always sit in the proper spot while the rest of the beasts roll around him in a wave. But a few days ago, our anchor… I’m not sure how to finish that metaphor, except to say he slipped his chain. In short, did the (almost) unspeakable.

Paul was off island for work, so it was just me and the boys. Usually Travis is the one I have to watch out for, but something told me Fred was up to no good in the yard.

I went to the door, leaned around the side of the house, and saw the most shocking thing.

“Hey!” I yelled, then watched in horror as a chunk of something fell from Fred’s mouth. Something brown and solid…

Travis dabbles in the doody-eating arts from time to time, but Fred had never done so before. Fine, to my knowledge. But it seems both weird and unfair to blame Fritz’s death for inspiring Fred to engage in coprophagia. (Yes, that is the real word for feces-eating; wow them at your next trivia night.) And maybe this wasn’t a pattern of behavior, but a one-off.

Maybe Ninja had dared Fred to do it. (A prospect, by the way, I could almost believe).

Except, then I caught him again.

I’d just returned from walking Travis when I saw Fred’s nose to the ground and let out a yell. Fred didn’t succeed in his attempt, but there wasn’t as much… evidence remaining as I would have expected from a dog his size. I wandered the yard with the shovel, but it was around dusk. We’ve had a fair bit of wind lately that brought in now-brown leaves large and small, not to mention the scraps and dead lilikoi vine cast-offs from the tree fall a couple of weeks ago.

In other words, if I wanted to find the poop, I’d have to rake our yard. For the first time.

Let me be clear: I grew up on a mountain in West Virginia, so of course I’d raked before. Isn’t raking one of those chores all kids love? But being tropical and surrounded by ohia forest, there’d never been a need to remove anything more than the occasional palm frond from this yard. (Or cane toad, but they don’t rake well.) So I hadn’t raked. Until now.

I don’t think I care to repeat the experience.

It turns out what we have in our dog yard isn’t really grass. Oh, I’m sure it’s a type of grass. It’s green and its bits are vaguely blade-like, but you’re not going to see anyone planting it on a golf course or in your subdivision. It creeps to spread, almost more like a vine. And it’s actually not that green right now, either, thanks to an unusually dry winter.

[**Happy to report over four inches of rain fell yesterday, so I was able to take a long shower this morning without looking at our catchment tank apprehensively.**] 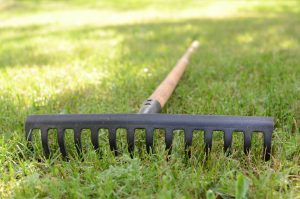 Back to yard work. We do possess what I think of as a proper rake—you know, solid wooden handle with short metal tines that belong in a horror movie. (The internet tells me that is a bow rake; you’re welcome for killing at trivia this weekend.)

But to avoid peeling the grass away from the cinder/soil in a mat the way the feral pigs do everywhere outside the fenced dog yard, I decided the plastic leaf rake would be more appropriate.

What a ridiculous tool! It looks like a hair comb for Paul Bunyan. And who needs an eight-foot-long rake? Maybe a retired NBA center, but definitely not a five foot <mumble, mumble> inch tall writer.

It doesn’t help that I’m not sure what is considered proper raking technique. I used the leaf rake the way I would sweep. Except I’m much better at sweeping. The rake’s tines kept catching in the grass, so I tried to snag the leaves by floating the rake above the ground. To feel the leaves, Crouching Writer, Hidden Dignity style.

I suspect the dogs were laughing at me.

When I finally decided I’d spent enough time squinting at the ground and making my shoulders ache, I went to fetch the wheelbarrow since, unlike sweeping, raking has no handy-dandy dustpan. But retrieving it required some serious carport Tetris, as well as a certain level of trust in Future Me.

(Tomorrow Judy, please don’t hit the wheelbarrow with the car if it’s not in precisely the same spot and you’re relying on muscle memory and the magical universe to park…)

Ultimately I discovered, as did everyone within a half mile hearing radius, that the contraption’s wheels need a full can of WD-40. (Ninja might have done psycho leaps around the yard; I’m not sure because I’d closed my own eyes against the sound.) The rhythmic, screeching cacophony (eeeep, eeeep, eeeep) summoned the feral pigs, not that they ever seem to wander far. They chuffed at me from the jungle in annoyance as I covered our kitchen compost (that’s dinner, human) with a pile of leaves.

When I finally retreated inside, it was too dark to tell if the yard looked any better, and I never found a single additional turd. But I had a sense of accomplishment.

And the dogs had breath treats.