Today, I’m sharing the pictures my internet couldn’t handle last week, but first, thank you for the commiseration with the last post’s kvetching.

Good news—the rain has finally abated to occasional showers, although with heavy vog (volcanic fog) and cloud cover, nothing is drying out in a hurry.

I’ve mentioned before that with 150 inches of rain a year (380 cm), unless we’re in the middle of a drought, it’s always wet here. That’s why any opened food packages (chips, cereal, etc.) go in a sealed plastic bag with a desiccant pack.

A few days ago, I tried to pour a bowl of properly sealed cereal, and it stuck. 2/3 of a bag, congealed into one solid cereal sculpture. It resembled a midwestern state. Granted, the cereal was the pfoofy, organic version of Honey Nut Cheerios, so it was probably a little sticky to begin with, but it should not require a Rocky Balboa impersonation to release the little Os. 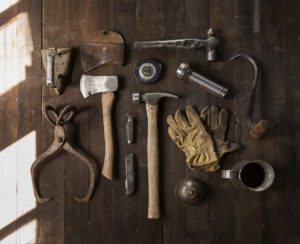 The other good news is that my husband fixed the hot water heater. Booyah! (Did I mention the snow on Mauna Kea and Mauna Loa? I couldn’t see it from the shower, but still…)

Let me just take a moment to say, my husband is one of those people you’d want along in case of zombie or other apocalypse. In our household, I’m often the source of inspiration, while my husband handles the execution.

If civilization collapsed, I could: 1) brainstorm a crazy but effective, outside-the-box solution in some area I’m completely ignorant of, thus saving our lives, once and only once; 2) come up with creative ways to combine various canned goods in a tasty way; and 3) coin funny phrases for recurring bad situations. (Aren’t you glad you don’t need to know the definition of zombie trots?)

In other words, I’d be good for very little that’s reliably useful. My husband, on the other hand, would be building shit. Defenses, Offenses, Dog Fences… (But I might double-check his measurements.)

Speaking of Dog Fences, I forgot one of my survival skills. I can also hold flashlights, which is what I was doing Tuesday night while my husband used power tools in the dark to re-dogproof the yard.

See, once the rain stopped, Fred’s crazy kicked in and he—for the second time—chewed a large hole through the lattice beneath our house to escape. The first time, it was because of thunderstorms. That could have been the case this time as well, but I have a sneaking suspicion it was simply a combination of stockpiled energy and feral pigs roaming the property, just out of reach.

Now finally on to the previously scheduled topic, another installment of The Writer’s Environs.

Despite the copious quantities of rain, Hawaii Island is so young geologically speaking that we don’t have much in the way of surface water. A few small rivers maintain water year-round, and these are now—not surprisingly—brown and raging. The last time I drove past it, Hilo Bay had the approximate color of chocolate milk. I can only think of two lakes on the island, one atop a mountain and one atop a cinder cone (both very mystical, I might add). Oh, wait, there is one more lake…

The lava lake is back at Kilauea. 🙂

I don’t think it ever technically leaves, but it does rise and fall within the caldera, and it’s not always visible.

My husband and I drove up to see it one night back in April when it came within a hundred feet or so of the caldera rim. I’d recently heard that the lava was now visible even during the day, and we hadn’t been to Volcano for a while, so we took a trip up a few weeks ago.

I’m sharing some pictures, but they don’t do it justice. Although technically still within the volcano (heebie-jeebies), the Jaggar Museum Overlook is 1.2 miles from the lake itself. I was able to get glowy spots with a long lens, but I didn’t have a tripod, and there’s smoke (steam) constantly rolling from the venting edges. The scale is challenging, too—you can either get a bit of glow, or a sense of the caldera itself, but not both. 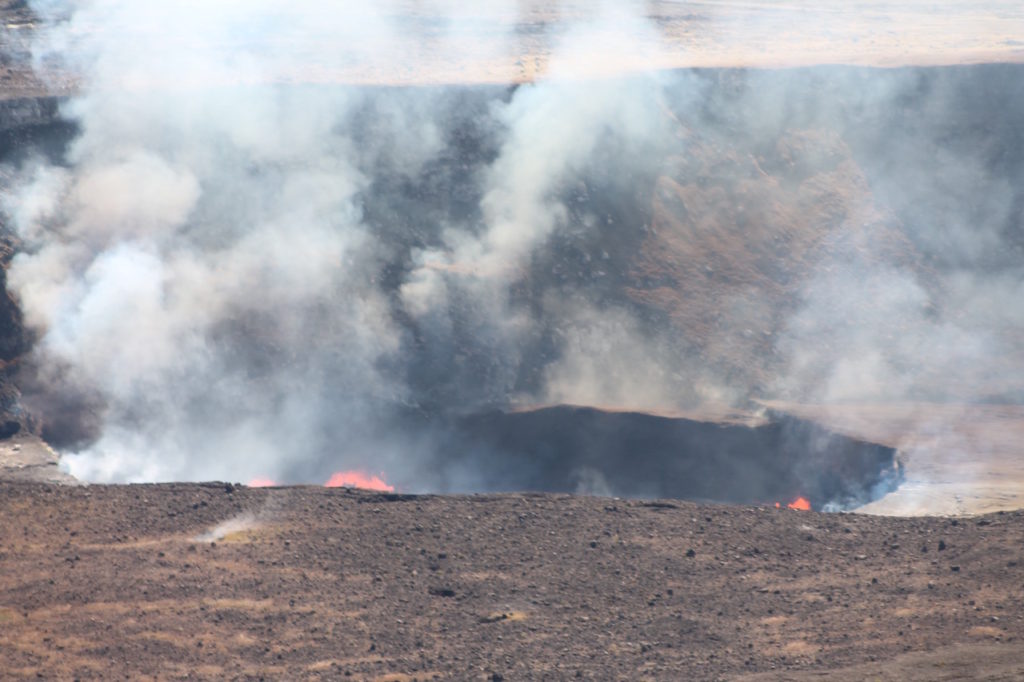 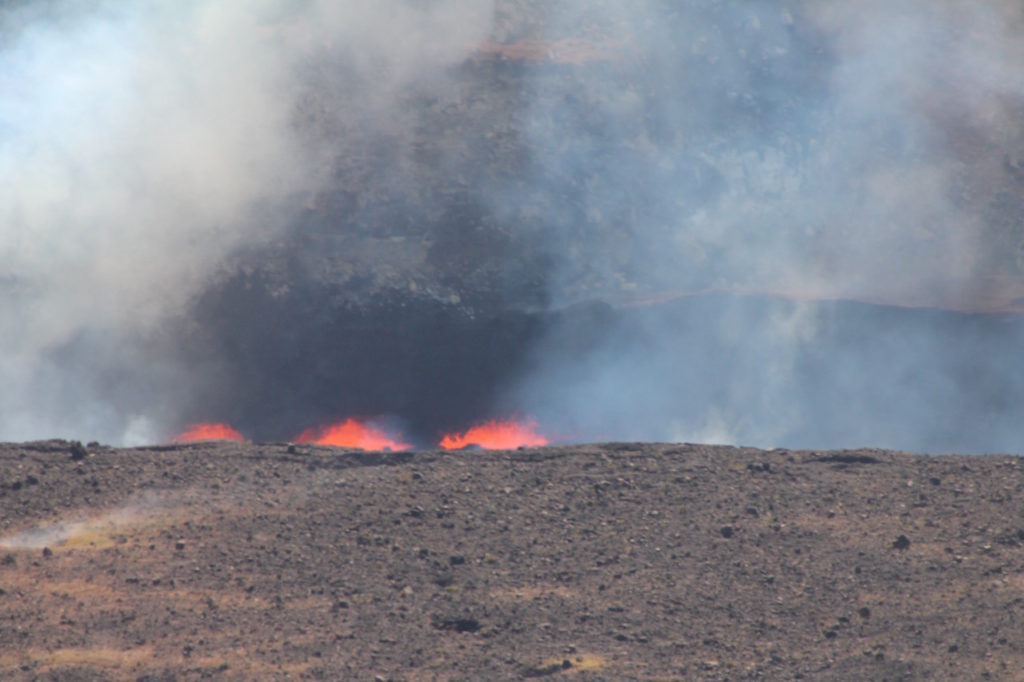 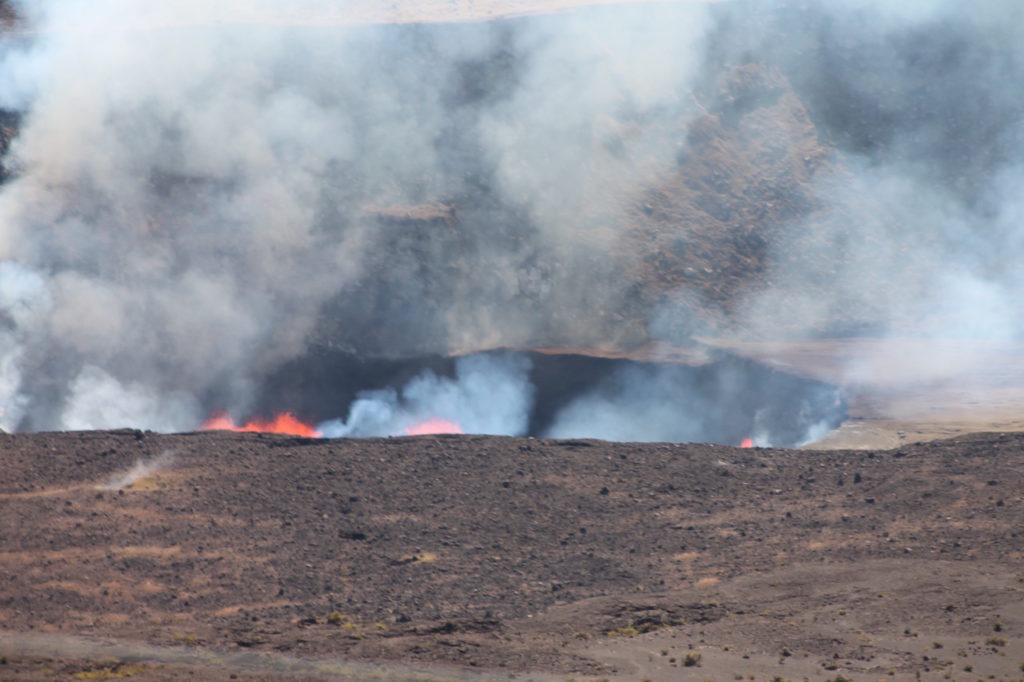 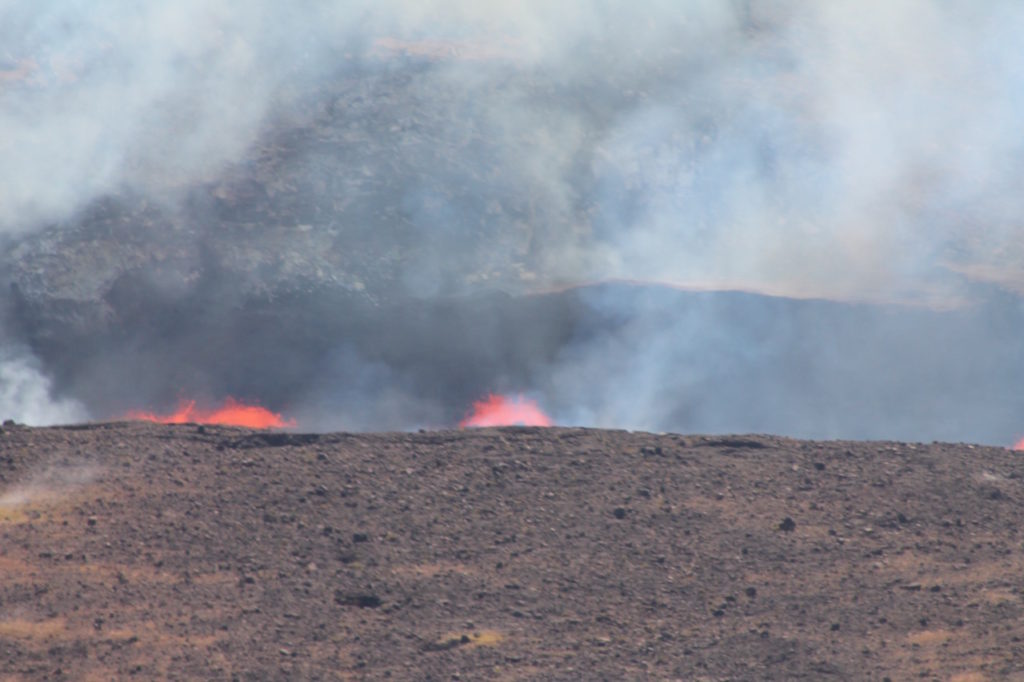 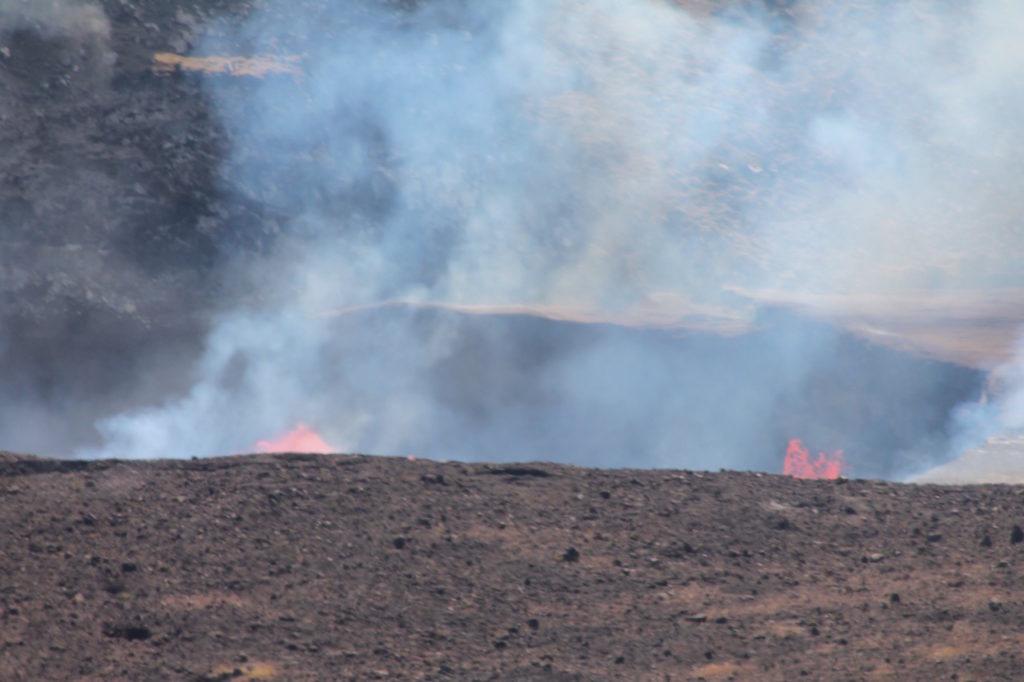 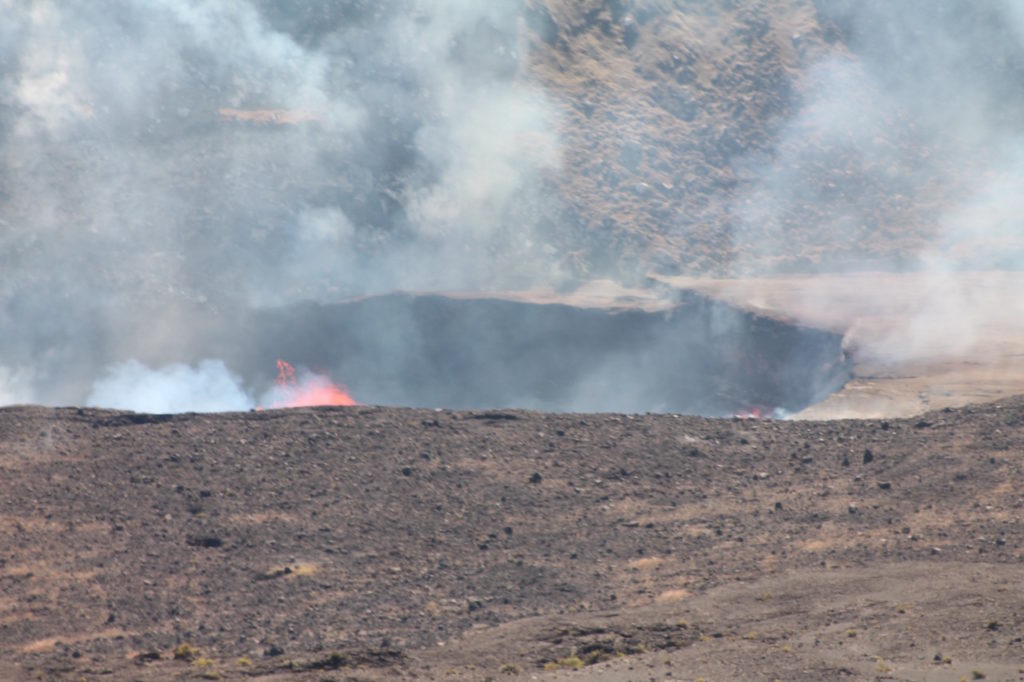 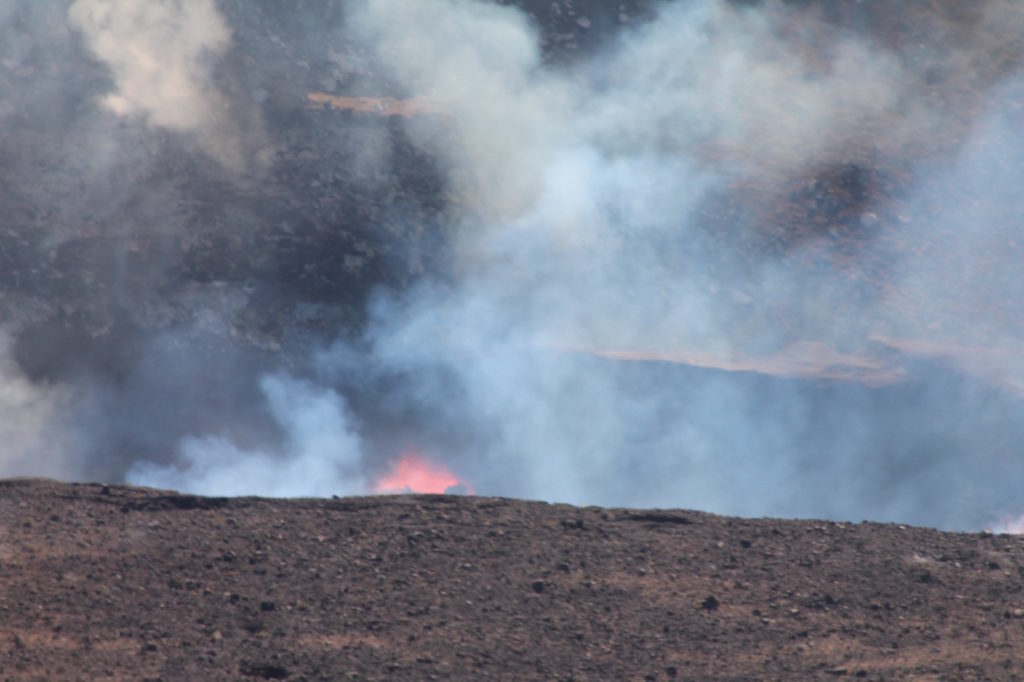 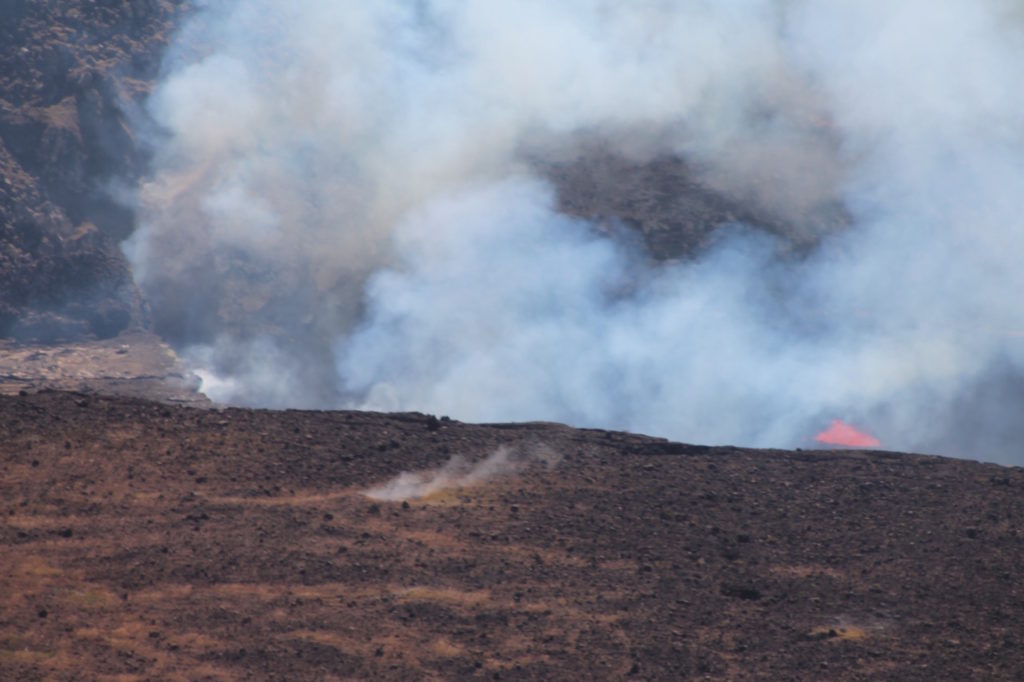 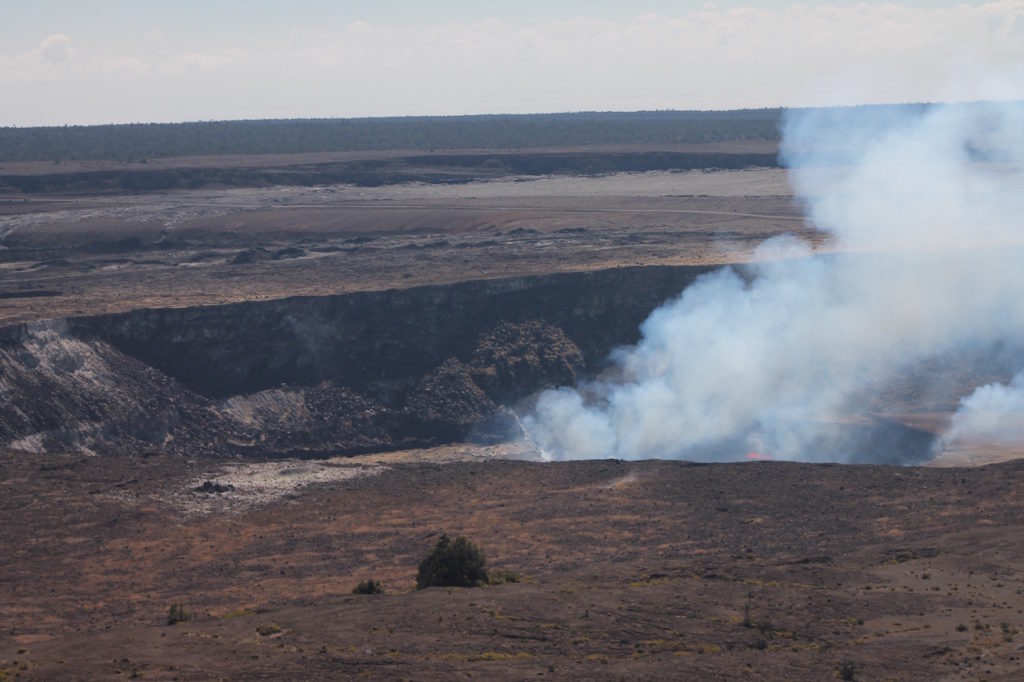 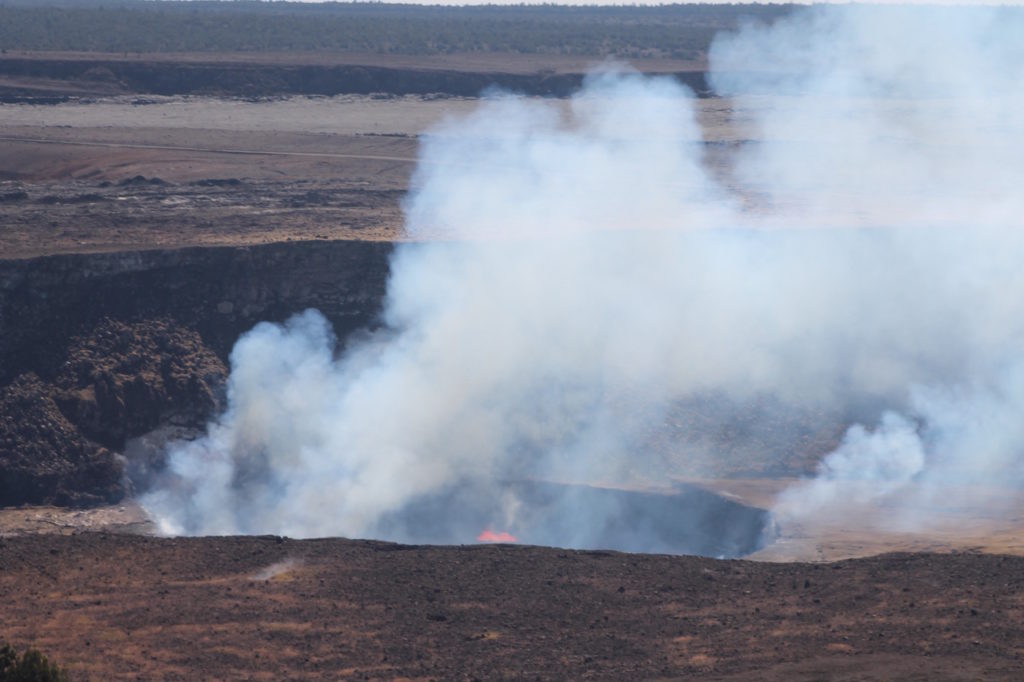 The lava tends to cool at the surface of the lake, forming a skin like hot chocolate that’s absorbed again when a wave or explosion disturbs the surface. A few lava lake explosions have been caught on video, including one last week right below the HVO webcam.

I’ll leave you with the cool US Geological Survey video from November 28, 2016, with an explosion caused by a rockfall. (The rockfall may or may not have been triggered by running zombies.)