I almost took my dog’s Valium this morning. 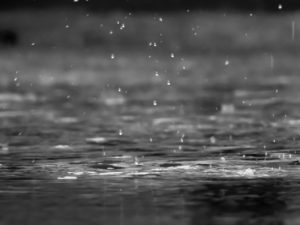 We’ve been under various flood advisories here in East Hawaii (plus the occasional gale, winter storm, and thunderstorm) all week.

Rain isn’t unusual for us, but it’s dumping, the way that makes you thankful you don’t have any soil to slow the water down as it pours through the lava rock. (Remind me of that thankfulness the next time I complain about our inability to grow anything except mold and sweet potatoes.)

Even with very little soil, our mushy, mucky driveway has standing water (very unusual) as do many of the roads (not so much). That means everything is wet, everywhere. The dogs are getting fewer and shorter walks, so they alternate between it’s-dumping sleep coma and OMG-I-must-chase-the-cat-in-the-house excitement.

The cat also gets his crazy on, with incessant yowling, racing through the house, flinging rugs, and occasionally pouncing on unsuspecting dogs. And Ninja is the worst offender when it comes to mucking up the house. He’s in and out all the time, and loves to traverse a cinder patch next to our house that is apparently magnetically attracted to his paws.

The relentless, heavy rain also means that, since we’re off the grid, we have to keep an eye on our power consumption (I’m looking at you, greedy fridge). And our internet service is intermittent at best (Satellite FAQs: Does rain interfere with your internet service? Yes, in East Hawaii it does.) That’s why the picture-heavy blog post I’d originally planned for today is on hold (this one has been dropped twice) and you’re stuck with a rant instead. 😉

It’s also why I keep getting dumped in online meetings, including one with my developmental editor last week. Allow me to briefly pause the kvetching to share that I did manage to get a round of Prodigal edits back to her late last night. Yay! It was a near thing though, with lots of router flashing and rumbling (but not by the router). Cue transition back to kvetching…

Yesterday morning, the thunderstorms started, which is why the Fred’s valium was in such a prominent position.

I know, dog valium. But we’ve tried everything else, and he’s a 75-pound dog that gets violently terrified. (He actually knocked out some of his own teeth during a storm while being boarded, and at home he’s bent the bars of his metal crate; see Where’s My Scotty and Wiping the Slate Clean.)

Last night, we finally gave up and—this is when some of you should look away from the screen—put the dog in the bed with us. [Where’s that screaming Escher emoji when you need it?] We are not dog-in-the-bed people. When you have three dogs with a combined weight of two hundred pounds, that’s a recipe for disaster. But under the circumstances, it was the option most likely to result in the humans being the least sleep-deprived. For the record, yes, we are still moderately sleep-deprived today, but the stoned dog behaved pretty well.

Finally, the kvetching would not be complete without mentioning today’s ablutions.

Our only functioning shower is outside. (Short explanation: we have to cut through a wall to fix the inside one, which is super tiny anyway, and so far we’d rather be lazy and exhibitionist—not really, we have no neighbors—than deal with a big headache so we can have the privilege of being claustrophobic.)

Whether we’re rained on in the shower depends on how hard it’s raining and in which direction. Today: hard and the wrong way. That’s okay, at least we have our trusty on-demand water heater. Today: not so much. In fact, not at all.

The why will require some dedicated trouble-shooting, the kind that doesn’t happen weekday mornings, but may relate to previous rat damage (That’s Why You Don’t Leave the House, Want to Get Some Reading Done). The important thing is no hot water. Outside. In the rain. We swim in the Pacific, so we are not entirely strangers to cool water. But let me tell you, catchment water after weeks of very little sun… that is cold water. There was definitely some pottymouth happening in my blazing fast cleansing. But I was also laughing the whole time, either in disbelief or because vital systems were shutting down—I’m not sure which.

I promise next week will not be another kvetching post, regardless of our weather situation. (Well, not solely kvetching; I don’t want to make promises I can’t keep.) In the meantime, if you happen to bump into me, don’t worry—I doubled up on deodorant, just in case.

[Rain by Reza Shayestehpour from stocksnap.io]