You may recall (That’s Why You Don’t Leave the House) that we have occasional issues with rodentia in our rural Big Island home. Also, everywhere else we’ve lived on the island. Our first stop in North Kohala, the rats lived in the ceiling space above our heads and rolled mac nuts across it at night like bowling balls. There was a small knothole in the ceiling near the kitchen, and occasionally you’d see a rat head peering out of it like a periscope. It took us a month or more to get the rat situation under control here the last time we went off-island, and we’ve been pretty lucky since then. Until now. I blame El Niño, because, why not? And the cat, because, he’s the cat. 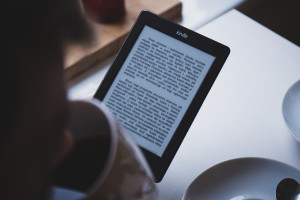 Thanks to El Niño, we’ve had a pretty severe drought the past few months here in East Hawaii. Most of the people in our rural district (including us) rely on catchment for water, so water delivery trucks have been a common sight. And, of course, it’s hard on the non-human residents as well, with vegetation growing on top of lava rock with very little soil in between. This past week, we finally got some heavy rain, and I’m wondering if that somehow triggered the whiskered interlopers again. The only alternative explanation is that rats are not readers, and they really didn’t want my husband to finish beta-reading my book. He’s been a trooper, up later than usual every night, waking up bleary-eyed and mumbling stupid book in the morning (the way you do when a book wouldn’t let you sleep, not when you left an epic door-stopper out and stubbed your toe). A couple of nights ago, a rat in the kitchen woke us up at four a.m. The cat slept through it. (Incidentally, that’s the same night Travis started shrieking around midnight; he’d hurt his paw when he stood up after it had slipped between the bars in his crate… Dingbat Dog.) Then last night, when Paul had hit the novel’s climax and the action rolled toward the end, the rat got serious. We spent forty minutes chasing it around the house. And by we, I mean the two humans, not the other useless four-legged beasts. 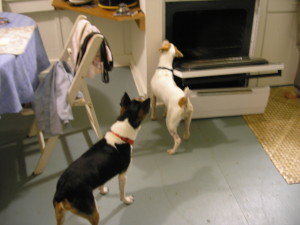 We had terriers when we moved to Hawaii, both adopted and their own special brand of crazy. They’ve passed on now, and most days when our three big dogs act out, we find ourselves saying, at least they’re not terriers. But, damn they were good rat-catchers! I’m not even sure they liked each other, but they made a great hunting team. Bishop was the high-leaping chaser and Asta was the all-around psycho finisher. Actually, they were too good. It’s all fun and games until your dogs actually catch a gargantuan rodent in the house and you realize, we just wanted them gone… we didn’t want the screaming and bloodshed!

Fritz and Travis get a freebie for last night because I’d secured them in their crates, afraid any interest would devolve into dog-on-dog bloodshed. Fred was unencumbered, but showed so little interest he didn’t even lift his head from where he’d tucked it around his rump. (Although he did occasionally raise an eyebrow.) And Ninja… what has happened to the cat’s legendary ninjacity? We literally threw him at the rat. Multiple times. There it is on the counter! There it is behind the oven! In the end, it was up to the vegetarian humans, my husband using a towel and me using a broomstick for poking and unused metal dog crate floors (imagine cooling racks for really big cookies) as shields, albeit climbable shields. Seriously… forty minutes. The action ranged from the kitchen (my best squeal was when the rat climbed my broomstick) to the bedroom, where Ninja finally showed a little interest. At the closet, Paul had to shake articles of clothing as he pulled them out to make sure the rat wasn’t still clinging to them. Then under the bed, which was Ninja’s favorite. Under the bed… I’ve just been waiting for something to really be under the bed. Paul claims we dismantled the house, and he’s not exaggerating by much, with us shifting piles and furniture for access and herding barriers. On the bright side, I did find a tank top I’d lost over a year ago when we removed the drawers from the dresser to create viewing portals. (I thought I’d left it at the laundromat; turns out it was wedged between the drawer and the frame). 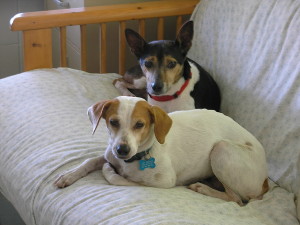 Our dear, departed crazy terriers Bishop and Asta, recovering after a hunt

Ultimately, Paul caught the rat in a towel (a dog towel; if you have pets, you know about towels so designated to never again be used on humans). We took it a hundred yards or so up the driveway before Paul released it and could return to beta reading duties. That was around ten-thirty p.m. Either he followed us back, or the bugger had friends. At midnight, we heard more rat sounds in the kitchen. This time, the rat panicked, trying to jump back up on the joists, and eventually fleeing the way he’d come in. At well after one a.m., right around the time Paul finally finished reading Braving the Boneyard, one of our stinky friends returned. And again, we scared him back out the way he’d come in. Did I mention the cat was still sleeping? Third time was apparently the charm, at least last night, and we slept the remaining few hours until morning. Tonight… maybe we could rent someone else’s terriers?