I finished my own last pass yesterday, and I’m just wrapping up beta reader feedback.

I’ll be interested to see if my editor finds any continuity issues. Continuity is always a bugaboo for me. For example. during Prodigal’s rough draft, I once started the day by writing a chapter in a different house. Let me be clear: I was still in the same house. My characters changed houses from the scene I’d drafted the day before. 😜

I’ve also joked about devoting a single massive whiteboard to tracking my characters’ clothing. It only remains a joke because I don’t have the wall space to mount such a board. 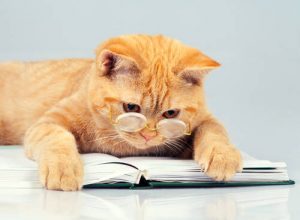 It’s more difficult to maintain continuity when revisions begin. Even though I delete a paragraph in my file, I cannot delete it in my head. It’s like Schrödinger’s Manuscript in there: each version of the manuscript continues to exist until I actually check the screen to see which one made it.

During the Prodigal revisions, one particular, relatively minor revision rippled out, leaving tiny tentacles of vestigial story bits scattered throughout the manuscript, like an Evil Continuity Cephalopod. (For the record, I love cephalopods and think they’re incapable of evil. If you need a cuteness break, check this little guy out.)

It’s not all that different from something I alluded to last week (Subtleties of Setting). After finishing the Prodigal rough draft, I found myself wondering about the memories I’d drawn upon in writing the book. Was what I’d written consistent with reality? The details don’t matter so much since I’ve chosen a fictional setting, but I wanted to get the feeling right.

My husband and I hopped on a plane in December (hey, Mom!) to find out. 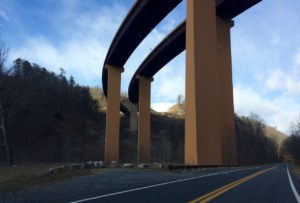 It was very cold (though not snowing) during our visit, so we didn’t spend as much time outside as we would’ve liked.

As is often the case, my mother was the Driving Martyr, the Authorial Chauffeur if you will. In the past decade or so, they’ve added some fancy new bits of road in our area (including this mind-trippy bypass), but we traveled the old routes where we could.

My husband became the Listening Martyr. That’s where Judy skated on the river, or That’s where Mom hit a patch of ice and… maybe we’ll save that one. 😉  We even drove past my old high school, which is still there, but now has an addition or two and a middle school below it. (If below it rather than across the street sounds directionally weird, that’s because you didn’t grow up in West Virginia.)

We continued on to the next county, and the next one after that (did I mention, Mom the Driving Martyr?), with the South Branch of the Potomac River in sight much of the way. Snow didn’t really fall, but swirled in the air like a dust storm—there was nothing gentle or snow-globey about it. 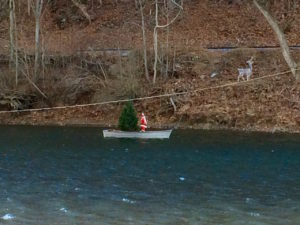 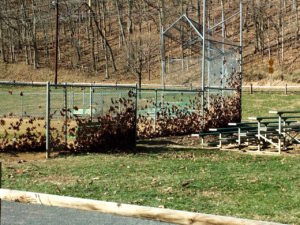 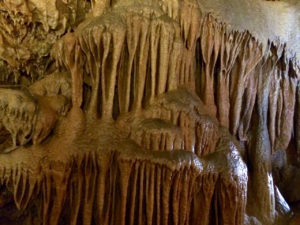 We were nearly blown off our feet (especially my husband, who gets extra thanks for wielding his iPhone camera; I forgot to bring mine) when we stopped at a park for a better look at this Santa tethered in the river. Check out the leaves stuck in the baseball backstop. It felt downright balmy inside Smoke Hole Caverns, one of those kinds of places that excites the kid explorer in everyone. I found myself wondering how I could write the spot into the next book. (But don’t hold your breath.)

Rental cabins stretched along the road nearby, not far from the river, and I had a moment’s fantasy of tucking in at one of them for the winter to finish writing the rest of the Dead Hollow series. Part of the appeal was, who can resist the romantic idea of writing a novel in a cabin? But the bigger part was a feeling of familiarity, a sense that we’re here. 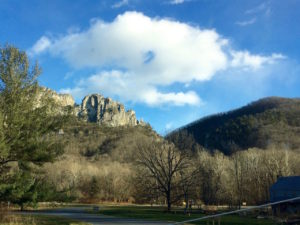 I mentioned in a post written before the trip (Back to My Roots) that the fictional town of Cold Springs owes a lot to my hometown, but I’d pulled from my memories around the state of West Virginia for the setting. For some reason, this particular area really spoke to me.

I closed my eyes, thought, This is Beecham County, and imagined I’d see Adam and JJ (two of Prodigal’s main characters) when I opened them. I pointed out rocky ridges to my husband and said, “That’s what I’m talking about!”

As we climbed higher on the winding mountain roads, a gravel road would split off and I’d think, JJ lives that way, or That’s where such-and-such happened. It was a pretty surreal feeling.

Not quite as surreal but slightly uncanny, I was reviewing the area online while writing this post and found that one of the rock formations is called Judy Rocks, with a nearby community of Judy Gap. Hmm… maybe that’s where I should rent my writer’s cabin. 🤔