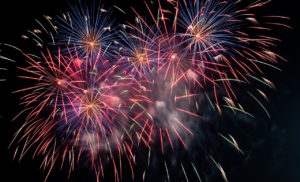 Ah, yes, another New Year is hard upon us. If you’re not going out to celebrate, I hope you have all of your entertainment and dining options standing by, as well as any appropriate medications for your pets (and perhaps for you, to deal with them). Today my husband is picking up more Valium for our dog Fred, who—thanks to a few neighbors with more guns and fireworks than sense—has been working his way slowly but surely through the bottle and possibly toward doggie rehab.

With the exception of sleep-disrupting dog anxiety, I’m not really feeling the New Year’s thing this year. Traveling a week or so before Christmas threw off our usual holiday prep and sense of time. And right now, I’m digging into revisions on the first Dead Hollow book with the goal of a mid-January copy editor delivery, so it’s hard to lift my head up and look around, much less evaluate my life with a sense of perspective. But that’s what life is, isn’t it? Dedicating ourselves to a series of things we think we have to finish, before we can take the time to do everything else that’s passing us by in the periphery. Or at least, that’s the danger for me. It’s easy to not do those other things because I’m a Paralysis by Analysis Ninja. Think about all the ins and outs and whys and why-nots long enough, and the opportunity passes you by.

I’m fighting that tendency lately. In fact, if I were a resolution person, it would be an excellent resolution for this year. I’m not (see Resolving to be Resolute, Not to Aspire), which may be why I didn’t wait until January to try to be better. Our recent trip to West Virginia is one example; we did it almost on the spur of the moment, despite a laundry list of reasons to wait, and nothing bad happened. (Full disclosure: that’s almost true; despite being medicated, poor Fred did break off a couple more teeth at the kennel during a thunderstorm.) Another example: I signed up for a indie writer’s conference on the mainland in the spring, despite not being sure if I was ready for it or if I could financially justify it. (By the way, I’m so excited.) And last weekend… well, this is one I have to show you. 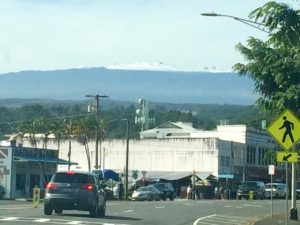 You know how you have a list of things you’d really like to do that don’t quite rise to Bucket List status, but are very cool and much more significant than Try the new Mexican place that just moved in downtown? Oh come on, you probably haven’t written it down, but you know you have one of those lists. Well, I’ve never been to the summit of Mauna Kea here on the Big Island, so Go to the top of Mauna Kea to see the snow is high up on my Sub-Bucket List. And we have had snow… 🙂 (I promise no pedestrians were harmed in the snapping of that grainy photo.)

Christmas Eve was the first day the road opened after the most recent heavy snows. My husband and I went to an early yoga class with a friend and then hitched a ride up the mountain with her and her husband. Remember that talking-yourself-out-of-doing-things danger? The trek requires a four-wheel drive vehicle, which our friends possessed. First obstacle surmounted. I was not physically feeling a hundred percent (nowhere near it). But I mostly sucked it up, or at least tucked myself into my shell and tried not to be too cranky. Second obstacle surmounted. The weather was super snotty in Hilo. But surely it would be pretty on top of the mountain. Obstacle surmounted. (It was actually snotty the whole drive until I’m guessing about 8500 feet, when we suddenly emerged from rainy fog into the most fantastic blue sky and sunshine.) We wisely hit a cafe for breakfast before leaving town (coffee and food circumvent numerous obstacles). Finally, some of us (me, perhaps, in a sweatshirt over a sleeveless shirt and yoga pants) weren’t super appropriately dressed for snow at nearly 14,000 feet. Meh, how cold can it be? With stupidity and good luck, obstacle surmounted. 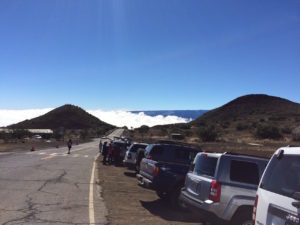 I could write a whole long blog post about how awesome the trip was: about passing pickup trucks full of snow and shovels on their way down, about the serendipity of running into friends at 9,200 feet at the Mauna Kea Visitor’s Center (where the hot water is always free), about seeing ti-leaf-skirted snow people, high altitude snow angels, and boogie board sledding. Instead, I’ll keep it brief and share some pictures. 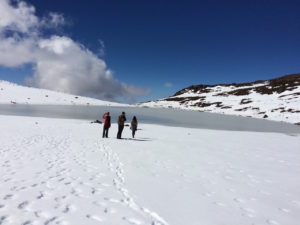 We parked and hiked to the sacred alpine Lake Waiau, at 13,020 feet. I have never experienced a silence so profound as the one that reigned there. Surprisingly, hiking uphill in wet sneakers was easier than downhill. It also involved more panting, except when I momentarily forgot we were breathing about 40% less oxygen than at sea level and ran down a slope, whooping and hollering. I remembered about the oxygen when I stopped. Our snowball fights were exuberant but short-lived, as well.

We didn’t actually make it to the summit of Mauna Kea Saturday. It was getting late by the time we returned to our vehicle, and the brakes had been a little persnickety on the way up. (It’s true, you don’t use your brakes driving uphill, which made the glitch more troubling; I’m happy to report it ended up being a nonissue.) But wowsers, what a day! 🙂 It was worth this week’s unusual face hue (sunburn around my sunglasses, despite wearing sunscreen) and bizarre stripes on my calves (more sunburn from the gap between my socks and yoga pants). I have to admit, though, only the fear of looking like a Hobbit has kept me from picking at my itchy, almost-peeling ears over the past couple of days.

I’ll close with a few more photos (apologies if I’m blowing out your internet or your devices) in the hopes that you’ll find them inspiring. So, what can you knock off your Sub-Bucket List this week? 😉