How are y’all doing out there in the big wide world? I hope you’re not still slamming ibuprofren after digging out from Winter Storm Gail.

If—like me—you were wondering about the whole winter storm-naming thing, Wikipedia says it has happened intermittently in the U.S. since the 1700s, but really kicked in with the Weather Channel in the 2010s. This Mental Floss piece explores, Why Is It Controversial to Name Winter Storms?

Webcams showed that, in solidarity, Hawaii Island had at least a dusting of snow on Mauna Kea last night. Meanwhile, we had four inches of rain in Lower Puna. Well, four inches that managed to land in our rain gauge, that is. The rain was so sideways-crazy that cardboard boxes on our lanai filled like poorly designed dog bowls. And wow, was it loud on our metal roof! 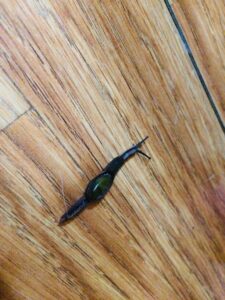 We had a brief break this morning, long enough for a desperate Fred to do his doody in the yard, but now it’s back again, which means our internet is sketchy.

Marked by the sounds of relentless rain and generators, the sight—and funky scent—of everything you own slowly disintegrating, and the feel of damp fabric and sticky floors. And also, semislugs in the house. (That’s not a shell on its back; it just looks like a shell.) How?? How do these snotty buggers sneak inside, suddenly appearing in the center of a room??

I published a blog post exactly one year ago about the arrival of winter in East Hawaii, Why I Didn’t Wake When Feral Pigs Ate Our Trash. It includes additional photographic evidence of said slugs, plus other winter trauma I had forgotten. And for the record, our refrigerator is still wobbling on its last legs!

In case the multiple sideways trips in this post so far weren’t a clue, I am currently struggling to get things done. Well, to get specific things done, versus whatever happens to land in front of my face. I’m betting many of you can sympathize—the holidays, Covid, the random challenges unique to each of our day-to-day lives. And then, winter happens.

Nothing makes me daydream about hunkering down with hot beverages and books and flipping the rest of the world the Back-Off Bird like winter weather. So rather than try—and fail—to be coherent, today I’m going to share some daydreaming with you.

Imagine you could go on a reading retreat for the rest of 2020. What would you read?

I have so many unread books on my Ereader and my bookshelves that I actually feel… [whispers] a little guilty.

But we will not allow guilt on our reading retreat!

That’s why instead of spending brain power prioritizing which unread titles to read first, I’m whipping out some stream of consciousness: series that I’ve sampled and enjoyed but haven’t finished. Feel free to use my list as inspiration, or grab a notepad and start on your own.

I’m not including covers or links (remember that spotty internet?), but the websites Fantastic Fiction and How to Read Me are both great resources for series reading order and links to specific books. Here we go…

Okay, I am stopping now, or my consciousness will continue to stream! Did I say, retreat until 2021? Yeah, I’m definitely going to need some additional time. How about you? 😂